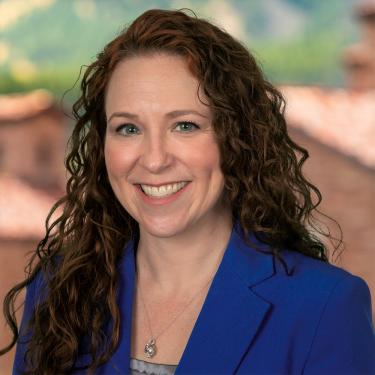 Stephanie was born and raised outside of Philadelphia, PA. She began her career at Temple University, serving in various roles including instructor in the Department of English, American Studies, and Women’s Studies and later as a Faculty Director of Academic Advising for the College of Liberal Arts. She then joined central administration as Associate Vice Provost before moving into the role of Associate Vice President for Planning and Administration and Chief of Staff for the Provost.

After nine years at Temple, Stephanie and her family moved to Colorado for the blue skies, sunshine and winter sports. She joined the National Center for Atmospheric Research (NCAR) as an Administrator with responsibilities for Budget, HR, and space management for the Climate and Global Dynamics Division. She then worked for the University Corporation for Atmospheric Research as Chief of Staff to the President.

Stephanie joined the Leeds School of Business in November of 2015. As Associate Dean of Administration and Finance, she has responsibilities for Budget and Finance, Human Resources, Technology Services, Space and Safety, and Faculty Support Services.