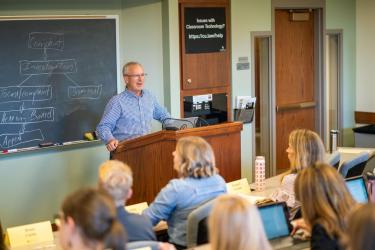 Pete Dignan has had a wide ranging career which includes time as Hydrologist for the state of Ohio, software entrepreneur, CEO of a renewable energy company, and founder of the consulting firm Ever Better which focuses on helping purpose driven organizations move toward more human-centered, adaptive ways of working. He brings all of this experience, breadth of perspective, and inside knowledge of the field to his position as Instructor for the Certificate in CSR (CCSR) executive education program at the Leeds School of Business. Pete describes teaching CCSR as the “one of the best things I have ever done,” and believes that CSR is more important now than ever given current events.

Pete got involved with the CCSR program in 2018, through his friend Geri Mitchell-Brown, who helped launch it and was its first instructor. When Geri stepped down she mentioned to Pete that she was looking for someone to take her place. He saw the position as an opportunity to contribute to shape how businesses think about the environment, social responsibility, strategy and engagement with the world, and asked to be considered for the role.

Over the course of 14 sessions, in 4 cohorts each year, Pete structures the class to deliver a practical experience that gives future CSR leaders the vocabulary, frameworks and models needed to do this work. Most of the  sessions are anchored by one or more guests who are professionals working in the field, and include time for students to network with speakers and one another. Over the years, Pete has added sessions such as one on B Corps and the B Impact Assessment, and another on the role of government and policy advocacy. Students also work on group projects, such as creating a full CSR budget for a real company, including showing where the money will come from, how it will be used, and the business case for this expense. Another session is focused on CSR strategy.  Pete selects 4-5 companies from the list of employers represented in the class, and assigns students to teams, each focused on one company. Teammates collaborate to create a detailed plan to launch a new CSR program, or to enhance an existing program. They pitch the proposal to classmates, who play the role of senior management, in class.

Pete says his favorite thing about teaching CCSR is when students have “aha moments.” He loves when they light up with an insight about an issue that is bigger or more complex than they had known, or when they realize that they know more about a topic than they were giving themselves credit for. He tries to help students capture that knowledge through a mind map they complete for the final class, and during which students explore what in the class has changed them, surprised them, or influenced what they want to do in the CSR field.

Pete believes that CCSR teaches students how to see CSR as holistic and systemic. His goal is for students to understand how businesses can play a material role in solving the world's most pressing social and environmental challenges. Ultimately, he says that CSR is all about people. As he puts it, “as a guy with a degree in environmental science, I believe that if we get it wrong on issues like climate change or species diversity, it will be sad for polar bears - but catastrophic for us as a species.” He also emphasizes that CSR is a relatively young field that is changing quickly, which is both a challenge and an opportunity for emerging professionals. The upside is that the field is still being shaped and there is room to make a big difference. The high rate of change means that CSR professionals need to be adaptive and agile.

That is true now perhaps more than ever. When asked about current events, Pete points out that last August, the Business Roundtable issued a statement that changed their definition of the purpose of business from a focus on shareholders to one on stakeholders. Then COVID-19 hit, and the Black Lives Matter movement increased in urgency. Pete argues that it is time for companies of all sizes to stop thinking about CSR as something extra that they do - something that is “bolted onto their core business” - and instead understand it as deeply integral to their strategy. He points to companies like Patagonia which have pulled advertising from Facebook in protest of their ad policies, as examples of what this might look like.

“If we are going to get it right CSR is not going to be optional anymore,” Pete says. “We have to think about diversity, equity and inclusion (DEI), culture and employee engagement, and we have to get engaged with policy advocacy. If we have learned anything about racism and white supremacy culture in America, it is that we are either racist or anti-racist. If we aren't pushing for the policies that drive change, we are part of the problem. The stakes have gone up.”

He is pleased by the recent ruling from SCOTUS on LGBTQ+ rights but pointed out that in a survey of Republicans just after the announcement, 70% said the Court got it right. Pete believes that the poll is pointing to societal change which is just as important as the ruling. He is cautious about DACA because the administration has said they will continue to fight the law.

CSR is in part about creating a more inclusive economy. But, Pete argues, this goal is going to be impossible without greater diversity in the field. This is something his consulting business has encouraged by working with startups like the Tech Chaplaincy Institute. The CCSR program also addresses DEI, with one of the 14 sessions specifically focused on this topic. Pete describes DEI as “the inward expression of the outward goal of CSR, which is to create a world in which everyone has a chance to thrive, now and in the future.” This session is designed to help current and future CSR professionals understand how companies can intentionally create that world. That said, Pete recognizes that CCSR must also work to increase representation by actively recruiting diverse students, and by lowering financial barriers to access.

Pete says “It's an honor and a privilege to be able to teach this class. It's a labor of love. It's a joy.” When asked how long he plans to continue Pete’s answer is immediate. “I will continue this work until this is just the norm of how businesses work. Then we will all be able to take a nap.”