Colorado’s food industry includes a rich supply chain of farmers and ranchers, food and beverage manufacturers, wholesalers, grocery stores, and restaurants. Each of these value-adding cogs in the supply chain produce economic value for their businesses, workers, communities, and end consumers.

Most of Colorado’s agricultural production occurs along the Eastern Plains, while the manufacturing and wholesale activity is concentrated in the urban corridor, and the grocery stores and restaurants are spread across the state based on where people live and visit. All told, there are nearly 400,000 jobs along the supply chain in the state (agriculture, manufacturing, wholesale, and retail). 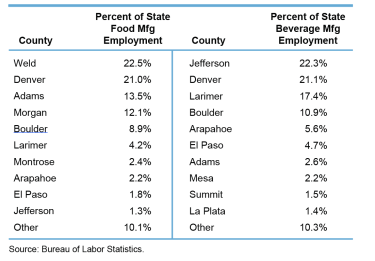 Just over two-thirds of the value of agriculture production in Colorado is derived from livestock; crops comprise the remaining 32%. The Agriculture sector represented 0.7% of overall state nominal gross domestic product in 2018 (compared to 0.8% for the nation), illustrating that Colorado is slightly less ag-intensive than the national average. However, agriculture makes up 17% to 26% of GDP for six of Colorado’s (mostly eastern plains) counties, illustrating the regional importance of the industry in select communities. Nearly 80% of GDP from Agriculture is derived in counties east of the Rocky Mountains in Colorado. Weld County records the largest amount of agriculture GDP in the state, accounting for 39% of the state’s total. 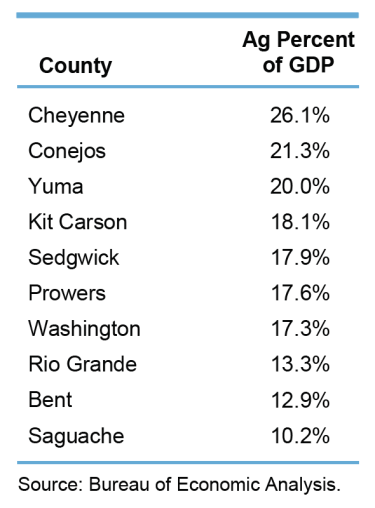 The largest employment sectors in Colorado’s food system are the consumer-facing sectors (e.g., grocery stores, liquor stores, restaurants, brew pubs, bars), representing over 287,000 jobs, or 10.7% of the total jobs in Colorado. Because they are consumer-facing, they are less concentrated in few counties, and are instead spread more representative to population and visitation in the state.

For decades, Americans have experienced the phenomenon of relatively cheaper food, borne from industry consolidations, technology, and productivity. Based on the Consumer Price Index, food at home (e.g., groceries) has risen at a slower pace than the basket of all goods over the past 40 years (2.7% vs. 3%, respectively). Over the past decade alone, food at home increased 14.1% versus 18.7% for all items. Said another way, relative to overall consumer spending, food has gotten cheaper over time. 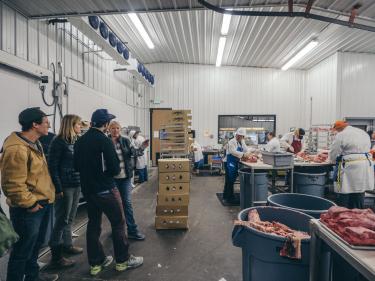 The impact of the COVID-19 pandemic has raised questions about the food system in America. Dairy farmers are dumping their milk, meat packing plants are facing COVID-19 outbreaks, and grocery stores are rationing meat, eggs, and many other goods while consumers resort to panic-buying and hoarding (grocery store sales spiked 27% from February to March). There will be greater scrutiny of the food supply chain to not only protect consumers, but producers and their employees alike.

Brian Lewandowski is the Executive Director of the Business Research Division at the Leeds School of Business, University of Colorado Boulder. He may be reached at Brian.Lewandowski@Colorado.EDU. 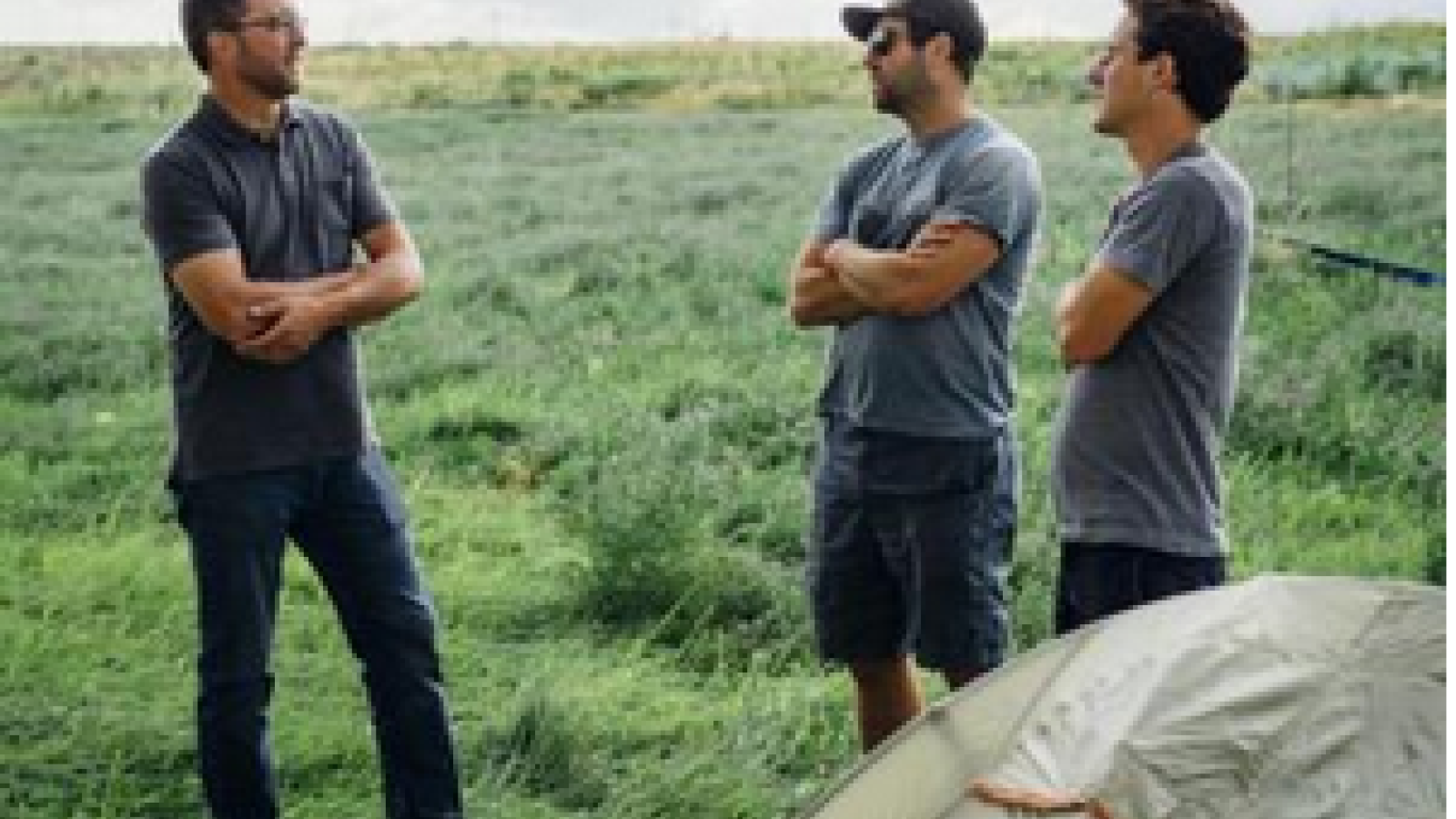 Do You Know How to Market Food? How About in a Pandemic? 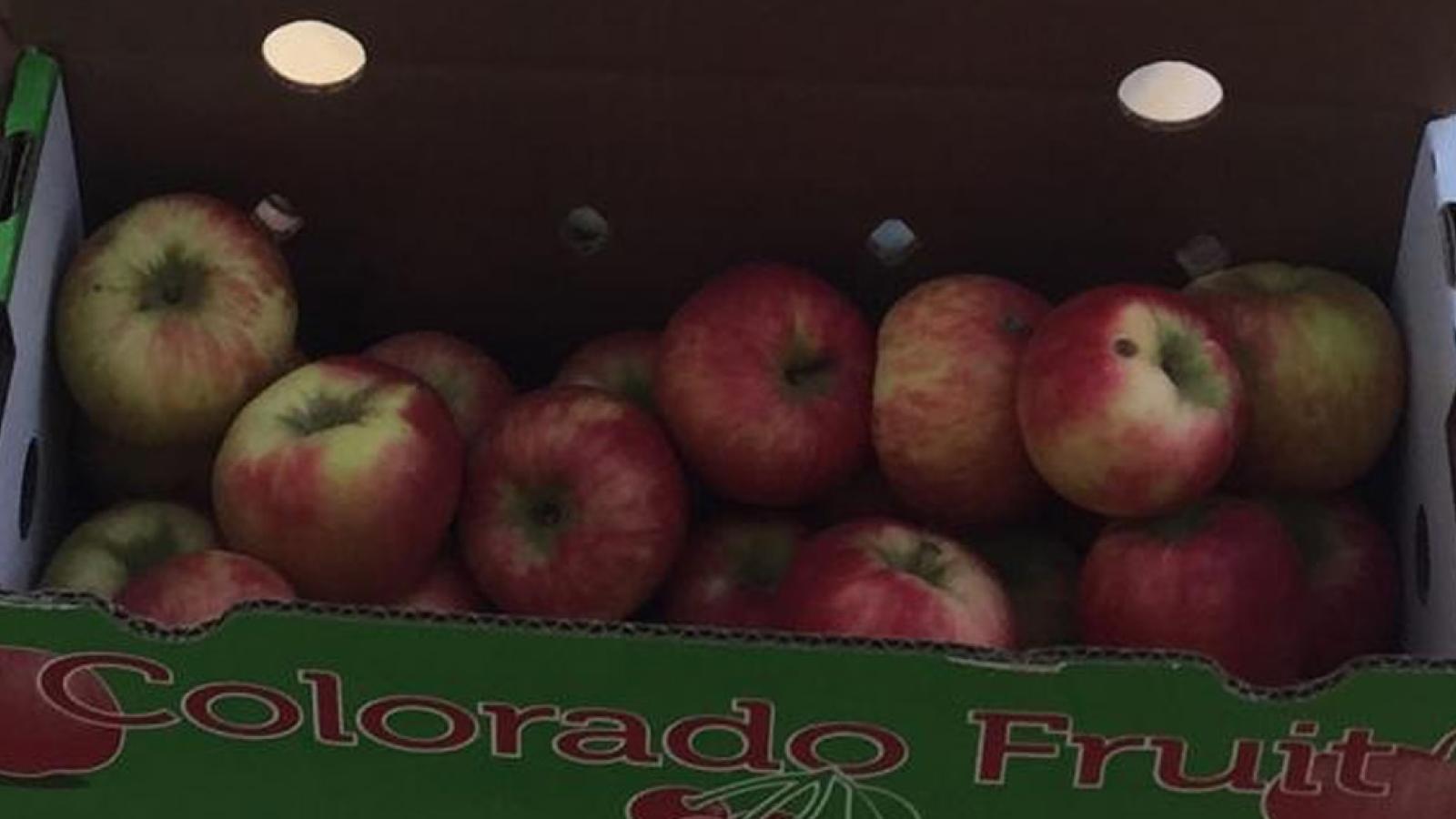 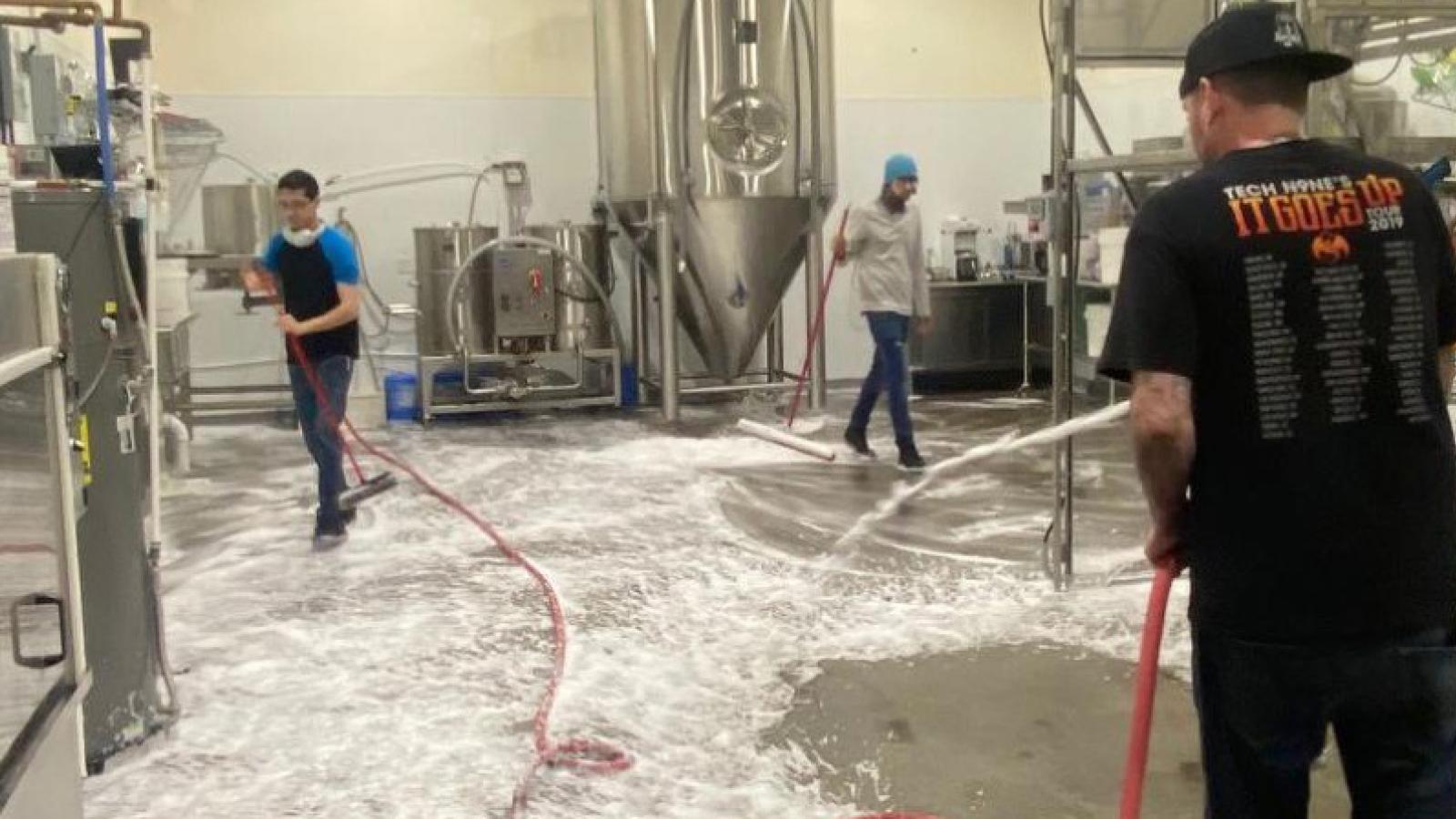 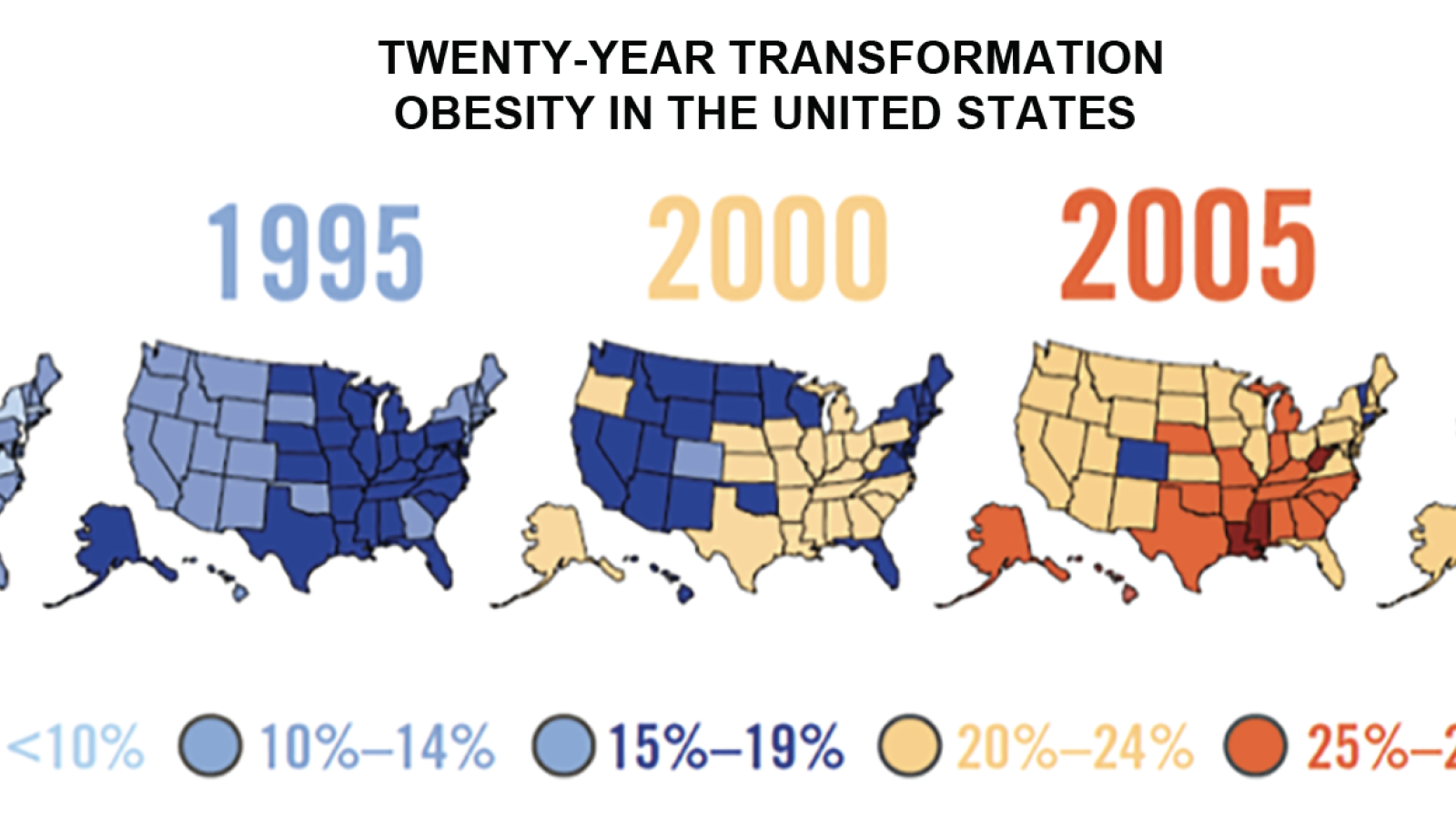 Why Colorado is the Good Food Capital 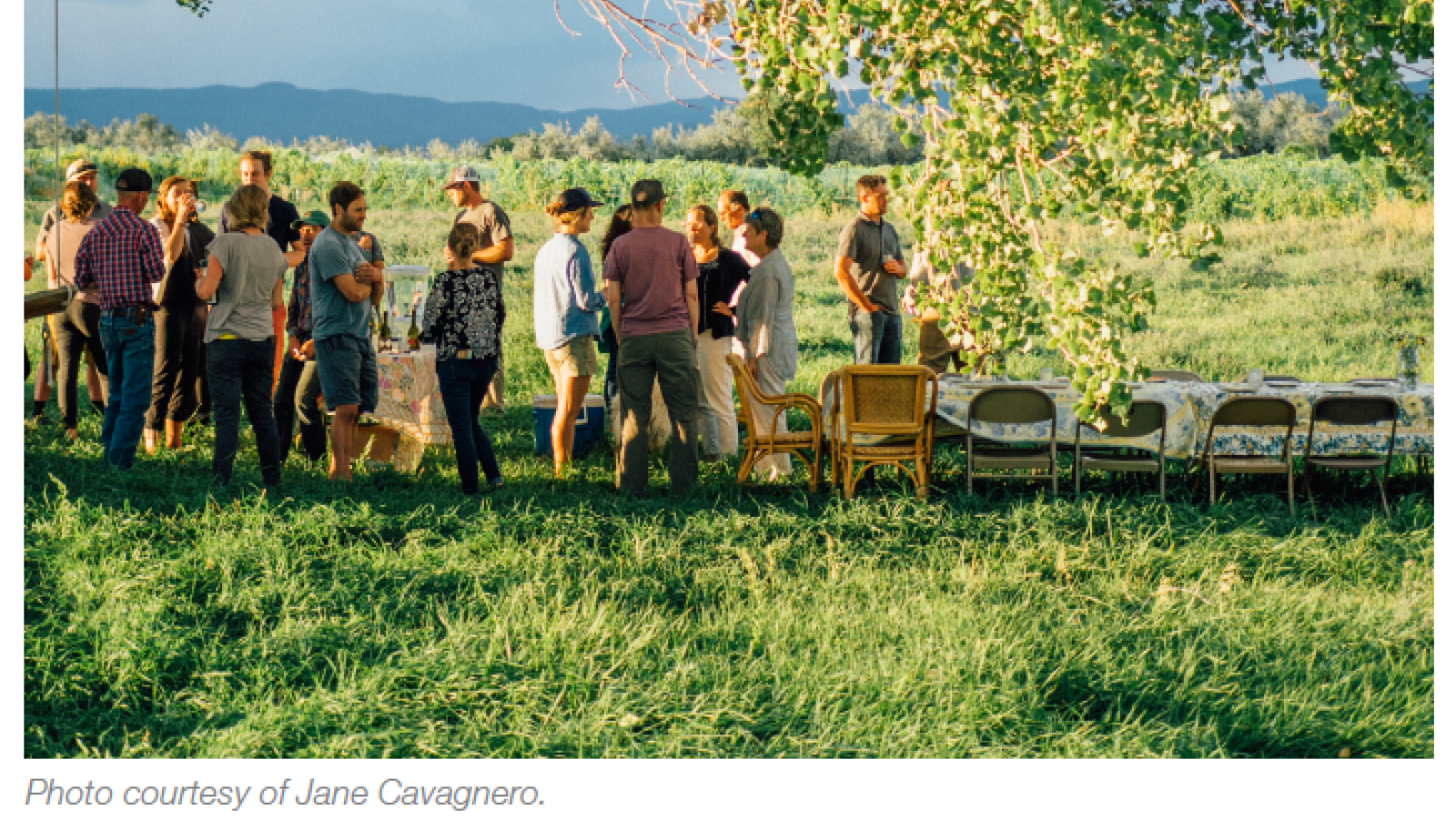