CESR’s Executive Director Mark Meaney, and Carla Fredericks, the Director of the American Indian Law Program, spoke at the 17th Session of the United Nations Permanent Forum on Indigenous Issues (UNPFII) on April 25, 2018 in New York. Their presentation focused on research being done as part of a new partnership between CU Law and the Leeds School of Business known as the First Peoples Investment Engagement Program (FPIEP).

Fredericks is conducting this research focused on the case of the Dakota Access Pipeline (DAPL) project that spurred protests by the Standing Rock Sioux tribe and allies. She is working with a team that is using an event study methodology to analyze the financial impact of social pressure caused by social media activity and traditional media coverage of DAPL. Her research will determine whether companies involved with DAPL suffered material harm as a result, quantified by changes in stock price.

FPIEP is proud to work with Dave Archambault II, former chairman of the Standing Rock Sioux tribe who led the tribe’s resistance to the Dakota Access Pipeline. Archambault joined FPIEP as a senior fellow in March of 2018. 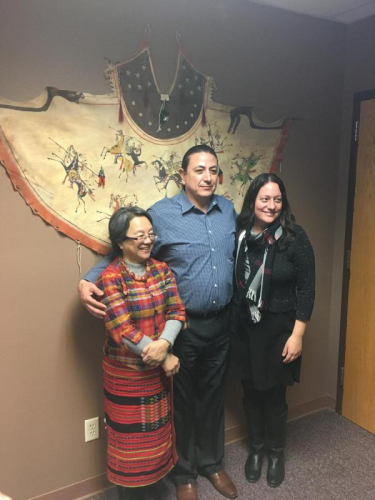 FPIEP works from a foundation of indigenous values to achieve a sustainable future for all.  Our team works to leverage strategies of corporate engagement and impact investing while building on the mission, values, and activities of First Peoples Worldwide. FPWW funds local development projects in Indigenous communities all over the world through connections with corporations, investors, non profits, and governments. Founded by Cherokee social entrepreneur Rebecca Adamson in 1997, FPWW has build an extensive legacy that FPIEP will carry forward.

The pattern of excluding indigenous voices and expertise has severely disrupted many thriving indigenous communities. Until recently, Native American tribes have fought primarily for human rights, as well as social and environmental justice. It is now clear that corporate advocacy and strategic alliances have demonstrated growing power in regards to ensuring the protection of indigenous people’s rights.