Professor Colene Robinson, co-director of Colorado Law’s Clinical Program, and Josi McCauley ’06 each received awards at the 2022 Colorado Office of the Child’s Representative (OCR) Annual Conference, held on September 12 and 13. 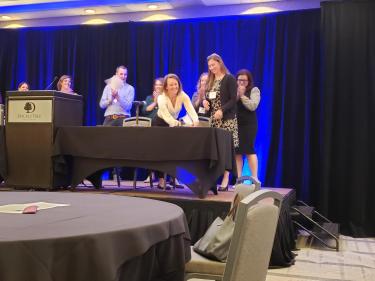 Professor Robinson was named the recipient of the Distinguished Contribution to the Practice of Child Representation Award. This award is given to an attorney who “has demonstrated extreme generosity and support for other OCR attorneys, whether it is taking the time to answer questions on the listserv, sharing motions and trial notebooks, or simply taking time to discuss a complicated case.”

“Professor Robinson is so deserving of this award,” remarked fellow clinical law professor Ann England. “She has spent her entire career working to improve and strengthen the representation for abused and neglected children. Her work as a lawyer, then in policy and now as a professor has made concrete and lasting changes for our most vulnerable people in society.”

Professor Robinson’s nomination extolls her contributions to the legal community describing how she “has been a cornerstone of attorney support and mentoring for more than 15 years in Colorado.”

Professor Robinson’s teaching and scholarship center on child welfare and juvenile delinquency. In addition to her work co-directing the law school’s Clinical Program, she directs the Juvenile and Family Law Clinic, through which students represent children and parents in child welfare cases and youth in delinquency and truancy matters. She also co-directs the Juvenile and Family Law Program (JFLP). 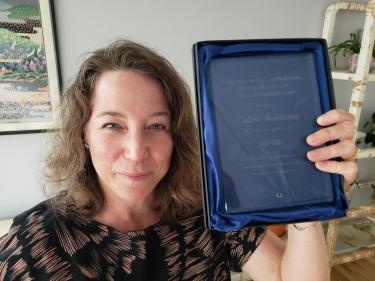 Before joining Colorado Law, Professor Robinson represented children and families throughout Colorado and New York City.  She was recognized as one of 10 national Civitas Childlaw Scholars and completed her law school education in a specialized program for child advocates at Loyola University Law School in Chicago. After clerking for the Connecticut State Supreme Court, she worked in New York City Legal Aid Society's Juvenile Rights Division. She moved to Colorado to become the Program Director of the National Association of Counsel for Children and directed the NACC Resource Center.

“Professor Robinson is tireless in her pursuit of justice,” said Professor England. “Colorado Law and its students are lucky to have such star.”

Josi McCauley, a 2006 graduate of the law school, was awarded the Covino Advocate of the Year Award. This award recognizes an attorney who demonstrates exceptional advocacy skills, integrity, and compassion in their representation of children.

McCauley’s nomination describes how she has “dedicated her legal career to advancing the rights of children at both the trial and appellate levels and has emerged as a true leader in this area of the law.” The nomination eloquently outlines how McCauley holds herself to the highest standards and “demonstrates the utmost diligence, professionalism, and compassion.”

A dedicated children’s rights advocate, McCauley has devoted her career to advocacy on behalf of the most vulnerable members of society and to the moral obligations she sets for herself in the practice of juvenile law. McCauley was herself a student in the Juvenile and Family Law Clinic the first year it was offered at Colorado Law. She now practices in the 8th Judicial District of Colorado.

“I am thrilled to offer my heartiest congratulations to Professor Robinson and Josi McCauley. It is wonderful to see two members of our law school family receive such well-deserved acknowledgement,” said law school Dean Lolita Buckner Inniss. “Both of these star lawyers have made an enormous impact protecting the interests and lives of our state’s children and families. We couldn’t be prouder.”