Myra Monfort ('75) and her family have spent decades giving back to Colorado Law and supporting Colorado communities through their philanthropy. Now, a brand-new space bearing Monfort’s name in the Wolf Law Building’s recently renovated garden level will stand as a physical testament to her generosity and deep commitment to the practice of law and legal education.

Monfort’s children, Brad Ellins and Rachel Ellins-Iozzia, surprised their mother with the named space, which was officially unveiled at a ribbon-cutting ceremony in February.

The Myra H. Monfort Suite houses the University of Colorado Law Review, the school’s oldest journal of legal scholarship, on which Monfort served while she was a student. The 1,200-square-foot suite was designed for Colorado Law Review students to work collaboratively to publish first-rate scholarship that is read across the country.

Monfort graduated from Barnard College in 1960 and worked as an interior decorator to support her family while her then-husband attended law school at Columbia University. When his job brought the family to Colorado in 1972, she decided to attend law school herself, enrolling at Colorado Law that year.

After graduation, she practiced labor law and became vice president in charge of legal counsel at Monfort of Colorado, which later merged with ConAgra.

Over the years, Monfort has enthusiastically given her time and resources to a range of community-related causes spanning law, music, health, education, and animal welfare. She and her late husband, Kenneth, established the Kenneth and Myra Monfort Charitable Foundation, which has supported a number of initiatives at Colorado Law and throughout the state.

In 1990, Myra and Kenneth created a named professorship in commercial law, to which Colorado Law’s late Dean David Getches appointed Mark Loewenstein in 2009.

Inspired by Getches’ work in environmental and American Indian law, the foundation in 2012 established the Myra Monfort and David H. Getches Public Service Fellowship to provide financial support for law students interested in a career in public service or in the nonprofit sector. 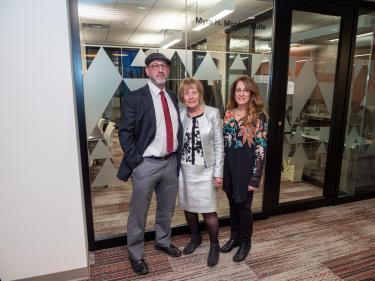 Myra Monfort (’75) and her children, Brad Ellins and Rachel Ellins-Iozzia.

Monfort always dreamed of being an attorney, and for Brad, it was special to see his mother’s name permanently inscribed at the institution that helped shape her career.

"Naming the space was special because Colorado Law was the place where her journey started," Brad said. "She believes the law is there to do the right thing. It is not there to manipulate as a means to an end. It’s especially important to her in this political climate right now that we put the interests of society before our own interests. That we put the best interests of everyone above ourselves."

For Monfort’s children, naming this space for their mother was an opportunity to give something back to a person who has long given back to others. The Myra H. Monfort Suite will serve as a hub for collaboration and community for future generations of law students.

There are a number of philanthropic opportunities to support the expanded journals suite. Please contact Peter Sanders, Assistant Dean for Advancement, at peter.sanders@colorado.edu or (303) 492-0752​.