Under the Iron Heel: The Wobblies and the Capitalist War on Radical Workers

Q&A with Professor Ahmed White, whose new book gives a dramatic, deeply researched account of how legal repression and vigilantism brought down the Wobblies—and how the destruction of their union haunts us to this day.

Earlier in his career, Professor Ahmed White's research focused heavily on the fate of rule of law norms and the rule of law concept in capitalist society, and on the role of criminal law and punishment as mechanisms of social control of the working class. More recently, Professor White's scholarship has taken a more definite historical turn. 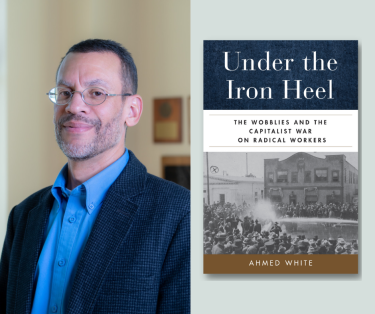 Much of his work concerns the history of law and labor relations from the early Twentieth Century through the New Deal period, as well as the viability of a functional system of labor rights in liberal society. He is one of the country's leading experts on the history of labor repression, which is a major subject of his two acclaimed books, “The Last Great Strike: Little Steel, the CIO, and the Struggle for Labor Rights in New Deal America” (Oakland: University of California, 2016) and “Under the Iron Heel: The Wobblies and the Capitalist War on Radical Workers” (Oakland, University of California, 2022).

In “Under the Iron Heel”, Professor White documents the torrent of legal persecution and extralegal, sometimes lethal violence that shattered the Industrial Workers of the World (IWW). In so doing, he reveals the remarkable courage of those who faced this campaign, lays bare the origins of the profoundly unequal and conflicted nation we know today, and uncovers disturbing truths about the law, political repression, and the limits of free speech and association in class society.

White, who is the Nicholas Rosenbaum Professor of Law, sat down with the law school’s Robyn Munn to chat about “Under the Iron Heel: The Wobblies and the Capitalist War on Radical Workers”.

RM: Thanks so much for sharing your time and expertise with us, Professor White!

AW: It’s my pleasure. Shall we get started?

RM: Yes, please! For those of us without much previous knowledge of the IWW and its role in American history, would you mind summarizing what makes this organization and the campaign against it different from other labor unions?

AW: That’s a great question, as it goes to a main reason I wrote this book, which was to tell a largely forgotten story about forgotten people and what they endured.  The IWW was, in fact, the most radical labor organization of any real consequence in American history, and besides that, one of the most principled and audacious.  It did not want simply to improve working conditions, it wanted to change the world.  In the words of the great novelist, James Jones, who seemed to understand the union’s legacy better than just about anyone and wrote this decades after the union’s demise, the IWW and its members had a “vision we don’t possess.”

Precisely because of this, the IWW was probably subjected to more sustained and intensive repression than any organization, labor union or otherwise, in our country’s history.  Its members, the “Wobblies,” as everyone called them, suffered more for their political beliefs and commitments than almost anyone.  And they bore this with unsurpassed courage and grace.  To my mind, this was something that was not fully documented and needed to be documented, if only to give context to all these tired stories nowadays about some one-time “activist,” often a lawyer or politician long since promoted to the ranks of the respectable, who spent a night in jail or lost some friends or a fancy job.  If you really want to know something about bravery and sacrifice in the service of principle, or about what this country’s done to people who actually challenged the interests of the powerful, I say read this book.

RM: I’m looking forward to digging in to my copy. In your Jacobin interview with Peter Cole, you describe the IWW’s vision of unionism as reaching “across the divides of race, ethnicity, and gender.” Considering the period, this seems remarkable and maybe even anachronistic. Was it? If so, would you mind elaborating on this aspect of the IWW’s vision?

AW: The union’s vision certainly was remarkable.  This was the time of Jim Crow, of genuine, comprehensive white supremacy and of something that closely resembled actual patriarchy, not just the vestiges of these systems that so preoccupy people nowadays.  In the early twentieth century, most American institutions, including the American Bar Association, virtually all of the law firms, many of the churches and civic clubs, the military, and also the big universities, for instance, were entirely segregated; and segregation was aggressively, sometimes violently enforced.  But this union boldly defied all of that, challenging these cultures of racism and sexism and the laws and customs that embodied and sustained them—and did so, I might add, at further costs to its reputation and to the safety and security of its members.

As it happens, most of the union’s members were white men, which reflected basic realities about the American working class a century ago as well as where and how the union was able to organize.  But its ranks were still notably diverse.  It organized significant numbers of women and blacks and many ethnic Europeans who were hardly considered white back then.  Moreover, among its top organizers were, for instance, a woman named Elizabeth Gurley Flynn, a black man named Ben Fletcher, and a gay white man named Charles Ashleigh, who was later the romantic partner of Harlem Renaissance writer Claude McKay.  All three were arrested for their involvement in the IWW, in Flynn’s case many times; and Fletcher and Ashleigh were sent to federal prison.

RM: Another line from the Jacobin piece really stuck with me. You wrote, “Much of the vigilantism the Wobblies endured was sanctioned by police and government officials, and much of the legal repression they faced was hardly within the four corners of the law anyway — which helps prove the broader point that law and legal process are not alternatives to violence but instead different means of imposing violence.”

Would you mind sharing a little more about how the law was used to impose violence against the IWW and its members? Did capitalists and law enforcement justify their actions using the argument that legal processes are an alternative to violence?

AW: The law was used to put roughly 500 IWWs in federal and state prisons and tens of thousands of them in local jails.  This wasn’t an accident or a perversion of legal process: it was in line with the express purposes of the law, including statutes, like Title I of the Espionage Act and some twenty state criminal syndicalism laws, that were written specifically to criminalize membership in the IWW.  And this was done with the full support of the courts, including quite a few progressive judges.  The main justification behind all of this was the notion that the IWW was a seditious and criminal organization bent on destruction and intent on undermining the war against Imperial Germany, abetting a Bolshevik revolution, fomenting race riots, and bringing down capitalism itself.  In fact, as many people involved in this campaign knew, all of these justifications, except for the last one, were untrue.  But this didn’t matter.

In response to the second question, I’d say that the progressives, who were actually in the forefront of this campaign at every level, were, like their descendants today, enamored of the law and inclined to destroy the IWW by lawful means.  But when such means were not availing, they were very quick to resort to extralegal measures, including vigilantism.  In November 1916, for instance, it was the progressive sheriff of Everett, Washington who led an armed mob of 200 in a murderous attack on a boatload of Wobblies that killed at least six of them.

RM: And was the law ever successfully wielded by the Wobblies in their defense or in pursuit of their goals?

AW: The Wobblies were fairly unique among leftists in not trying to turn the law against their adversaries.  They saw the law as nothing but a tool of the ruling class, and saw the repression they experienced, which they endured with such great courage, as confirmation of this judgment.  I much admire this about the Wobblies.  The union did engage lawyers at trial and on appeal, but few Wobblies put much faith in this, and they were right, as the only thing that really ended all the repression was their union’s eventual destruction.

RM: On a slightly different note, those of us who have been following news of former President Trump’s Mar-a-Lago suit and the January 6 investigations have found ourselves familiar with terms like sedition and the Espionage Act. Do you see any parallels in how these laws were applied to the Wobblies and how they are being utilized in today’s political landscape? Any striking differences?

AW: Needless to say, there are some fundamental differences between the IWW and the participants in the January 6 affair, let alone Donald Trump.  But you’re right to ask these questions, as a lot of what’s happened in recent years, including attempts to prosecute people involved in January 6 or whatnot, raises interesting and, frankly, very troubling questions about the proper extent of the Espionage Act and the sedition laws, about the ease with which all kinds of people, including today’s liberals, feel they can justify repression when it suits their purposes and aligns with their vision, and ultimately about the limits of what some have called “political justice.”

Right after January 6, there was among liberals a zeal, at times almost a frenzy, to break out these laws and start throwing people into prison.  And much about this really troubles me, as it seems too similar to the persecution of the Wobblies in its confident lack of restraint and the willingness to persecute the weak as well as the powerful.  I don’t feel that way because I sympathize with the goals behind January 6, as I certainly don’t; or because I discount what happened that day, which was not trivial.  But I’d be lying if I said I don’t notice some worrying parallels.  And of course, you needn’t look at January 6 or at Donald Trump and his supporters to find people to worry about.  What about Edward Snowden and Julian Assange, who helped expose outrageous, criminal conduct on the part of our government and, in payment for this, face exile, jail, and prosecution under the Espionage Act if they ever end up back in this country?  Or the condemnation, not so long ago, of Civil Rights, Native American, and environmental activists as dangerous seditionists?  Or, for that matter, the likely fate of the next organization that, like the IWW a hundred years ago, really seems poised to challenge the allocation of wealth and power in this country?

RM: It seems we today have much to learn from the Wobblies, their vision, and their downfall. Thanks so much for sharing with us here and for putting this remarkable scholarship out into the world.

Interested in reading Professor White's latest? Head to the University of California Press's site, Amazon, or Barnes & Noble to order your copy.