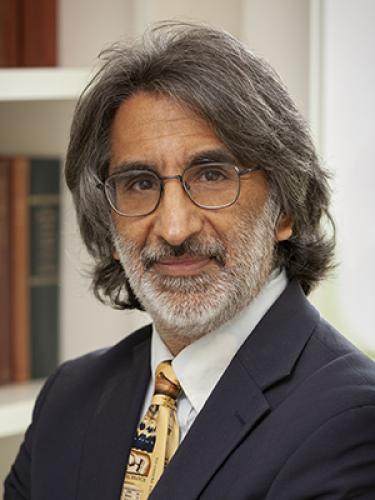 Akhil Reed Amar, Sterling Professor of Law and Political Science at Yale University, will deliver the University of Colorado Law School’s 63rd annual John R. Coen Lecture on April 22, 2021. The title of the lecture, which will be held virtually, is "America's First Peaceful (Just Barely!) Transfer of Power."

Amar will feature excerpts from his new book, The Words That Made Us: America’s Constitutional Conversation, 1760-1840, and discuss how Thomas Jefferson came to succeed John Adams as president of the United States. The story is particularly apt for modern-day citizens of Colorado, a state that was once part of an unofficial territory named for Thomas Jefferson.

Amar teaches constitutional law in both Yale College and Yale Law School. His work has won awards from both the American Bar Association and the Federalist Society, and he has been cited by Supreme Court justices across the spectrum in more than three dozen cases.

He has written widely for popular publications, including The New York Times, The Washington Post, The Wall Street Journal, Time, and The Atlantic. He was an informal consultant to the popular TV show, The West Wing, and his constitutional scholarship has been showcased on a wide range of broadcasts, including The Colbert Report, Up with Chris Hayes, Tucker Carlson Tonight, Morning Joe, AC360, Your World with Neil Cavuto, 11th Hour with Brian Williams, Fox News @Night with Shannon Bream, Fareed Zakaria GPS, Erin Burnett Outfront, and Constitution USA with Peter Sagal.

He is the author of more than 100 law review articles and several books, most notably The Bill of Rights (1998 — winner of the Yale University Press Governors’ Award), America’s Constitution (2005 — winner of the ABA’s Silver Gavel Award), America’s Unwritten Constitution (2012 — named one of the year’s 100 best nonfiction books by The Washington Post), and The Constitution Today (2016 — named one of the year’s top ten nonfiction books by Time magazine). His latest and most ambitious book, The Words That Made Us: America’s Constitutional Conversation, 1760-1840, is due out in May 2021. He has recently launched a weekly podcast, Amarica’s Constitution. A wide assortment of his articles and op-eds and video links to many of his public lectures and free online courses may be found at akhilamar.com.

The Coen lectureship was established in 1955 in memory of John Coen, a distinguished member of the Colorado bar and an able public speaker. The lectureship seeks to bring a prominent and distinguished lawyer, jurist, or scholar of law to deliver an annual lecture to Colorado Law’s students, faculty, and alumni on a legal subject of interest and benefit to the profession, preferably with some public or political aspect.