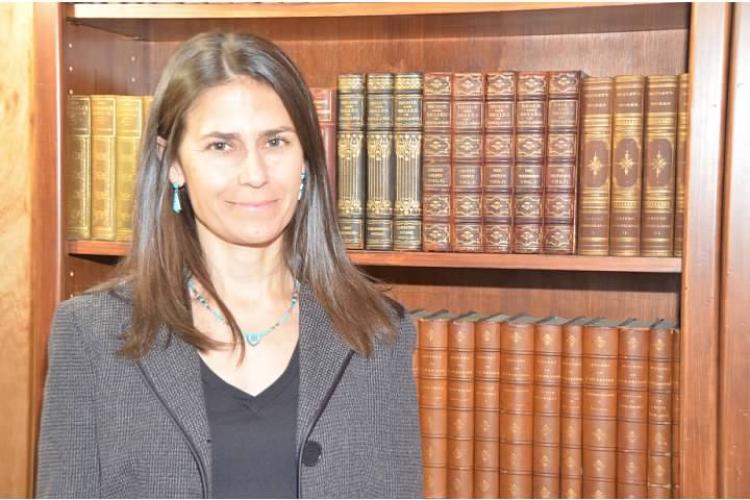 University of Colorado Law School Professor Kristen Carpenter, an American Indian law scholar with expertise in property, cultural property, human rights, and Indigenous peoples, has been appointed as a justice of the inaugural Supreme Court of the Shawnee Tribe.

Following her nomination by Chief Ben Barnes, Carpenter was confirmed by the Shawnee Tribal Council and sworn in during an online ceremony on Dec. 10, 2020, attended by tribal citizens, family, and friends. Tribal attorney Greg Bigler gave remarks on the importance of the court system. The oath was administered in both the English and Shawnee languages.

"I am deeply honored by the confidence entrusted in me by the Shawnee Tribe," Carpenter said. "At a time when Indigenous peoples are rebuilding their legal institutions, with attention to both traditional custom and contemporary circumstances, I will try to carry out my responsibilities with the utmost care and respect for the Shawnee people and all others within the jurisdiction."

"Our Tribe has always maintained and continued our culture and traditions," Barnes said. "It is my hope that with the creation of this Supreme Court for our nation, not only will we continue to grow our sovereignty as expressed through this action, but continue to legislate protections for our peoples' inherent rights to our traditional religions, to practice their culture, and to codify the United Nations Declaration on the Rights of Indigenous Peoples into Shawnee law as well as, ultimately, translate it into our Shawnee language."

Carpenter, who joined the Colorado Law faculty in 2009, is Council Tree Professor of Law and director of the American Indian Law Program. She serves on the United Nations Expert Mechanism on the Rights of Indigenous Peoples as its member from North America, one of seven worldwide experts to provide advice and assistance on Indigenous peoples' rights.

Carpenter is an elected member of the American Law Institute and served for many years on the board of the Federal Bar Association’s Indian Law Section.

She has written extensively on federal Indian law and is the coauthor of the widely used casebook Cases and Materials on Federal Indian Law. Her recent articles include “(Indigenous) Language as a Human Right,” with Alexey Tsykarev, published in the UCLA Journal of International Law and Foreign Affairs, and “Privatizing the Reservation?,” with Angela R. Riley, published in Stanford Law Review.