Inside the University of Colorado Law School's commitment to purge racism and achieve the equitable representation of BIPOC (Black, Indigenous, and people of color) and others from marginalized groups in our community and the legal profession. 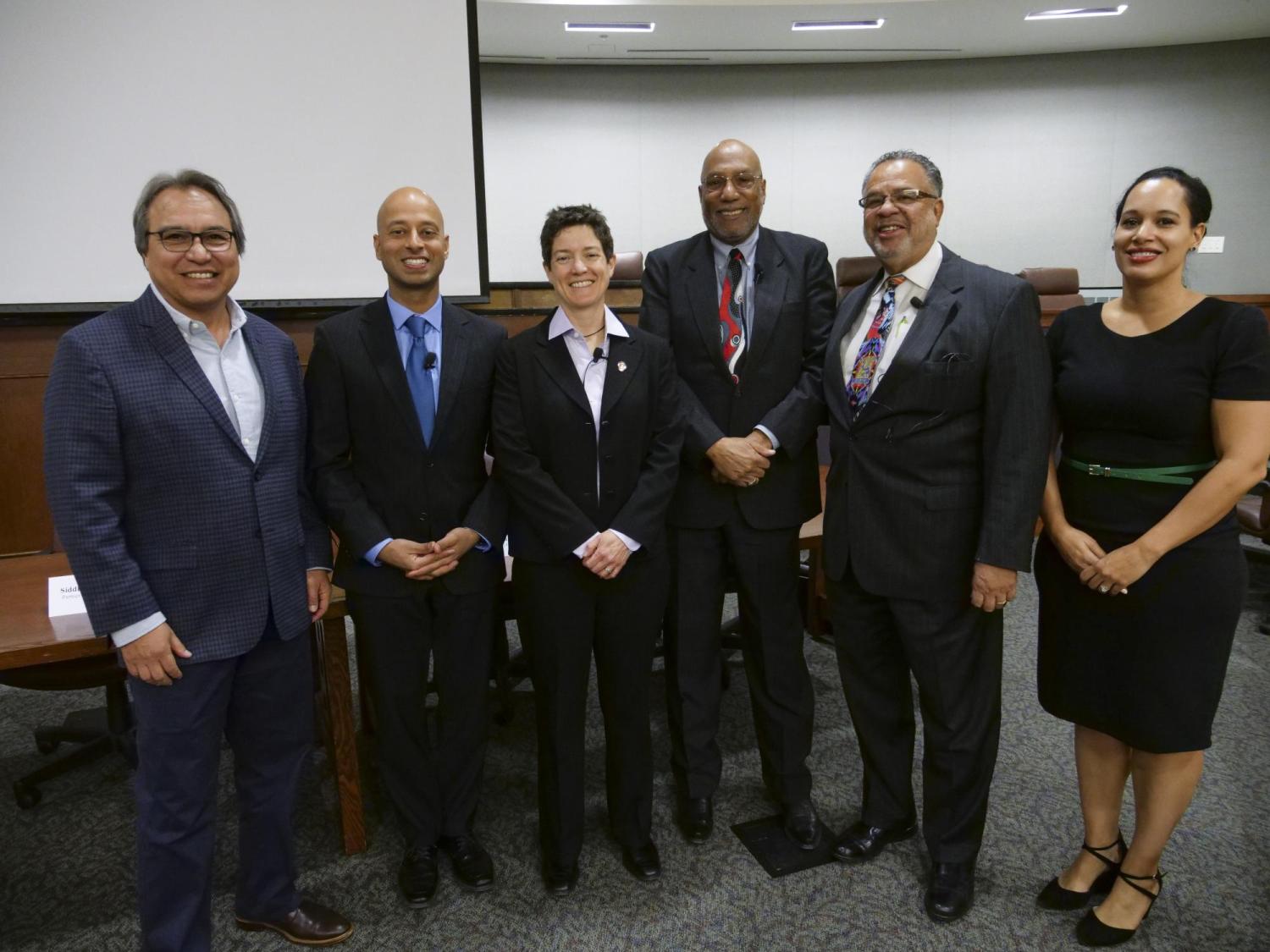 Of the 150 graduates in the University of Colorado Law School’s Class of 1970, the Hon. Gary Jackson and James “Jim” Cotton were the only Black students. Cotton went on to work for IBM, from which he would become the first African American to retire, in 1995. Denver District Attorney Mike McKevitt hired Jackson to be a prosecutor in his office. Jackson was the only Black deputy district attorney in the state.

"Not everyone was pleased to see me become a deputy district attorney in Colorado," Jackson told a crowd at an event celebrating the Rev. Martin Luther King Jr. in 2019.

"To maintain a representative democracy and a strong republic, all three branches of municipal, city, county, state, and federal government must reflect the diversity of its citizens.”

"In my first week on the job, I was pictured in the The Denver Post with three of my colleagues who were sworn in as deputy DAs. A Colorado Supreme Court justice commented in an editorial that my Afro did not demonstrate the dignity of being a lawyer in the most prestigious prosecutorial office in the state.

"My mom, who believed and lived by the words of Dr. King, sent the justice a polite letter informing him in no uncertain terms that educated people assess a person’s competency by his behavior, character, and talent and that I should be judged in that light. To the justice’s credit, he wrote a letter of apology to my mom and invited both of us to lunch. Ironically, decades later in my private law practice, I defended the justice’s grandson in a complex civil case. What my mom did in writing that letter took courage and pride in her children and in her race."

The rule of law became an all-encompassing part of Jackson’s life. In his office hangs a photograph of King with the saying: “It may be true that the law cannot make a man love me, but it can keep him from lynching me, and I think that’s pretty important."

Fifty years later, as Jackson prepares to retire from a career that spans four decades of private practice and the last eight years on the Denver County Court bench, the legal profession still consistently ranks on the bottom rung for racial and ethnic diversity.

According to the American Bar Association, 85% of active U.S. attorneys were white in 2019. In Colorado, where people of color comprise 34% of the state’s population, they make up just 10 percent of practicing lawyers.

The judiciary is frequently cited for its lack of representation of people of color, particularly African Americans. The Denver Post reported in July that in Colorado, a state that is 4% Black and 20% Latinx, Black judges account for 2.5% of the 196 district court judges statewide, and Latinx judges hold 7.6% of the positions. Black and Latinx judges hold about one in 10 of the county judgeships in Colorado.

The lack of judicial diversity also extends to Native American, Asian, and LGBTQ communities, as well as to women.

The calls for members of the legal profession to better reflect the demographics of the populations they serve come at a time when only half of 18- to 29-year-olds believe our justice system is able to operate without racial or ethnic bias, and 66% of African Americans polled by Harvard’s Institute of Politics said they have little or no confidence in a nonprejuducial outcome.

"To maintain a representative democracy and a strong republic, all three branches of municipal, city, county, state, and federal government must reflect the diversity of its citizens,” Jackson said. “Diversity on the bench matters because it promotes confidence in the judicial system, the rule of law, and the notion of equal justice for all."

"What we are trying to do is correct the injustices of the past and the inertia that favors the legacies of injustice."

Prosecutors, public defenders, and judges all say that diversifying the profession starts with our law schools. In 2019, about 62% of law students nationwide were white, roughly in line with the overall American population, the American Bar Foundation found. However, other races and ethnicities except Asian Americans were underrepresented.

Those involved in this work underscore the importance of the law school pipeline, the path to the profession that starts with choosing to apply to law school, pursuing a legal career, and deciding to remain in the profession.

For students of color, the pipeline is rife with potential leaks, starting with not having the privilege of knowing lawyers or having lawyers in one’s family, expensive and intensive LSAT prep courses, lack of access to mentors who understand the law school application process, and lack of role models. "If you’re a person of color, it’s hard to achieve what you can’t see," said Patricia Jarzobski, past president of the Colorado Bar Association.

Once in law school, students belonging to historically underrepresented groups face negative stereotyping, feelings of isolation, implicit bias, and sometime worse—obstacles that will continue throughout their careers, leading many to exit the profession altogether.

Kathleen Nalty (’85), a consultant who trains legal organizations in creating cultures of inclusion, has pointed out that inertia creates barriers that serve as the predominant cause of higher attrition rates among underrepresented groups. As Nalty has recognized, research indicates that female and LGBTQ attorneys, disabled attorneys, and attorneys of color are disproportionately excluded from important, career-advancing opportunities, including networking, access to information or decision makers, mentors and sponsors, meaningful work assignments, candid and frequent feedback, social integration, training and development, client contact, and promotions.

While many law schools have made a concerted effort to recruit more students from underrepresented groups—Colorado Law welcomed its three most racially and ethnically diverse incoming classes in 2017, 2019, and 2020—a fully representative legal profession is not possible without it’s being more inclusive, such that people from all backgrounds feel valued and respected, and have access to the same opportunities. Just as you cannot repair a house with a rotting foundation, you cannot make the legal profession one of diversity and inclusion without identifying and removing the hidden barriers that lawyers of color face as they advance in their careers.

"What we are trying to do is correct the injustices of the past and the inertia that favors the legacies of injustice,” said Dean S. James Anaya. "It is our responsibility as a law school to dismantle those legacies of exclusion and make legal education more accessible across communities, more representative of diverse backgrounds and experiences, and conducive to a more equitable and representative profession. It’s just the right thing to do. It’s what justice requires."

That’s not to mention the myriad other benefits associated with diverse organizations. Being around people whose perspectives and experiences are different from our own has been proven to make us more tolerant, creative, and effective in our work.

"We are a better and stronger environment for learning and discovery if we are more inclusive and diverse,” Anaya said. "When we have different voices, perspectives, and backgrounds to draw upon, we serve our constituencies better—whether that is our students as educators or our clients as lawyers."

On the following pages you’ll read the stories of Colorado Law alumni and leaders in the profession who are committed to making real change. We, too, commit to being a law school that doesn’t just speak the language of diversity and inclusion, but that seeks to purge racism from where it exists around us and work diligently to achieve the equitable representation of people of color and others from marginalized groups in our community and the legal profession.

Report Card: Work to Be Done 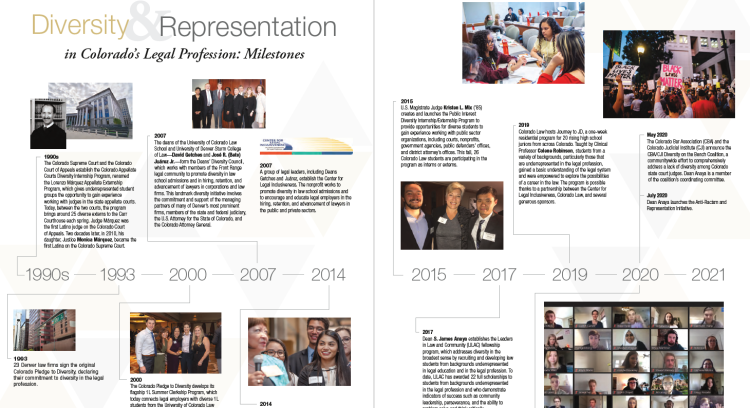 Issue: Amicus | Fall 2020 Issue
Return to the top of the page