Home Amicus | Fall 2020 Issue How to Do Things With Legal Doctrine: A Conversation With Pierre Schlag and Amy J. Griffin

How to Do Things With Legal Doctrine: A Conversation With Pierre Schlag and Amy J. Griffin

Home Amicus | Fall 2020 Issue How to Do Things With Legal Doctrine: A Conversation With Pierre Schlag and Amy J. Griffin

How to Do Things With Legal Doctrine: A Conversation With Pierre Schlag and Amy J. Griffin

In law, doctrine is the coin of the realm. Yet judges, lawyers, and law students often take the very idea of doctrine for granted, without asking how doctrine works—what it means, does, or might be made to do. Professors Pierre Schlag and Amy J. Griffin seek to change that with their new book, How to Do Things With Legal Doctrine (University of Chicago Press, 2020).

How can there be anything left to say about legal reasoning?

Pierre Schlag (PS): I actually think there is a huge amount left to say about legal reasoning. Now, if by legal reasoning we mean simply deduction, induction, reasoning by analogy, and the like, then there is not a whole lot left to say. But if one thinks about legal reasoning more broadly—by including all those moves that lawyers and judges use in constructing reasoned arguments for their positions, then there is a terrific amount to say. Legal reasoning as I see it includes setting the scene, framing the issues, anchoring the assumptions, surveying the possibilities, comparing the solutions, and so on. Very little in legal argument is settled because someone makes a sterling inductive argument or exposes a faulty deduction. It can happen, but it is rare. Instead, the success or failure of legal argument turns much more on the topics we cover in our book: how to create and undo legal distinctions, how to create or resolve baseline issues, how to bring out or shut down interpretive difficulties.

Now, the problem has been that because these things are often fluid, jurists and legal scholars have often thought that there’s not much to say about them. Our book demonstrates that this is not so. There are patterns to the chaos, logic to the ambiguities. We try to make the patterns explicit. 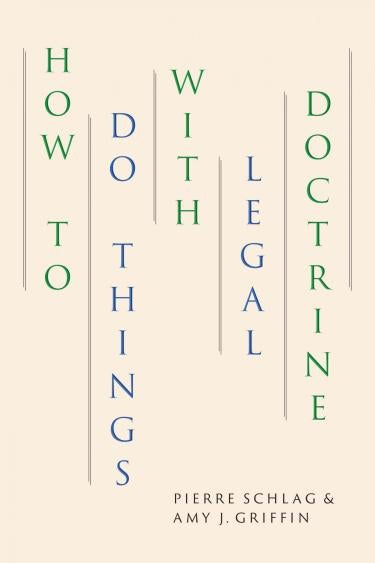 What were you after in this book? Who do you hope to reach and about what?

Amy J. Griffin (AG): I have long been frustrated by what seems to me to be a push to simplify legal reasoning—to make it fit into a one-size-fits-all formula. As a result of what has been likely a well-meaning effort to make legal analysis less daunting for students, I fear that law school has also made it much less interesting.

We are hoping that this book will reach a significant number of law professors and help them teach the more creative aspects of legal reasoning. The idea of law as "a creative enterprise," as we describe it in the book, might then, in turn, reach a significant number of law students. As someone who has taught legal writing for 15 years, I know we can do better on this front.

What made you seek out a collaborator for this project?

PS: Well, I didn’t want just any collaborator. I asked Amy because she is deeply interested in teaching and especially legal reasoning, and really close to the students in terms of understanding their struggles. Also, a nontraditional book like this one really required someone who could think outside the box while also being very grounded in what judges, lawyers, and students need, practically speaking. And this book posed a real challenge: People don’t think much about “legal doctrine.” There’s a reason for that—David Foster Wallace’s story about the fish pretty much sums it up:

Well, what the hell is doctrine?

We were trying to answer that question. But more than that, we were trying to focus on those tough moments when legal doctrine runs out and yet still the issues won’t go away. The brief still has to be written, the judicial opinion finished. So what do you do then? That’s a very large part of what our book addresses. It’s a legal reasoning book to read after you’ve already mastered the basics.

You mentioned above that law students are a crucial audience. What about lawyers and judges? What can the book contribute to their work or their thought?

AG: Hopefully, lawyers and judges will find it to be one of the more practical theoretical books they’ve ever read. As we say in the book, we’d like it to be used as an argument resource, a spur, and a guide to brainstorming. One of the things we’ve tried to do is make the invisible visible—to help lawyers and judges see patterns across fields of law that they might not have otherwise noticed. Once you’ve thought about baselines in law, you see them everywhere. Once you see the patterns you can’t unsee them. Recognizing doctrine as form is like the fish seeing the water in Wallace’s parable—it provides an entirely new perspective.

We have a book of exercises available on the University of Chicago Press website in which we ask how the various moves in our book can be used to make arguments in real cases: When is a fish not a "tangible object"? Is one 38-year-old horse enough to turn an interest in land into a “farm tenancy”? (Once you start reading cases you realize there’s no need to make anything up.) Not only do these examples help students understand the concepts we’re explaining, but they also demonstrate rather convincingly that the moves we describe really do come into play—indeed, have to come into play. That’s what legal practice is about.