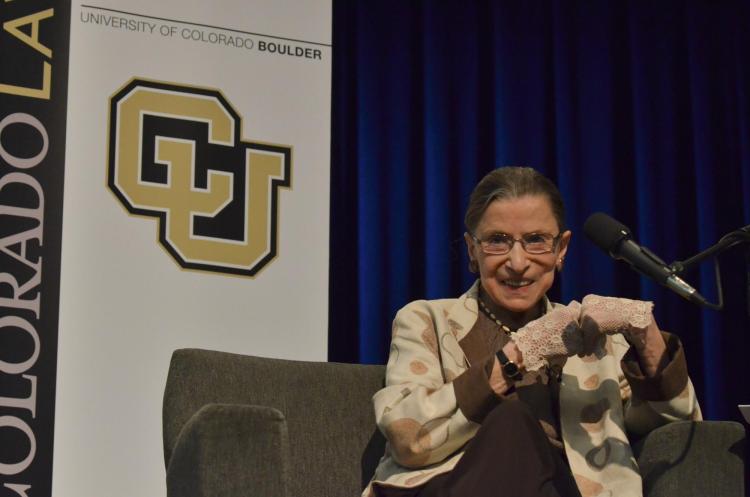 Provost Professor of Civil Rights Law and Director of the White Center Suzette Malveaux moderated the discussion, which touched on Ginsburg’s jurisprudence around the equal protection clause of the Constitution's 14th Amendment, advocacy for gender equality, and memorable dissenting opinions.

Weiser, former dean of Colorado Law, served as a law clerk for Ginsburg from 1995-96. Hart, a member of the Colorado Law faculty before her appointment to the Colorado Supreme Court, clerked for Justice John Paul Stevens when Ginsburg served.

The White Center invited high school students from across the state to participate in the conversation, which was recorded and is being shared with high school teachers throughout Colorado to incorporate into their curriculum.

A recording of the conversation can be found here.

The discussion was part of the White Center’s annual Constitution Day Project, which trains law students and volunteer attorneys to teach lessons in high school classrooms throughout Colorado on important and timely issues involving the U.S. Constitution. This year’s curriculum focused on the voting rights of felons, the distinction between disparate impact and intentional race discrimination, and the challenges facing election administrators during the upcoming election.

"Justice Ginsburg was a fierce advocate for constitutional principles," Malveaux said. "With the news of her death, we knew we wanted to expand our Constitution Day programming this year to include a discussion about her life and legacy. I am grateful to Attorney General Weiser and Justice Hart for sharing their reflections on Justice Ginsburg’s career, character and integrity, and far-reaching impact."

Ginsburg delivered the White Center’s John Paul Stevens Lecture in 2012, where she said one of her most well-known quotes regarding women’s equality.

While talking with Weiser, she said, "When I am sometimes asked, 'When will there be enough [women on the Supreme Court]?,' and I say, ‘When there are nine!’ There have been nine men, and no one ever raised a question about that."