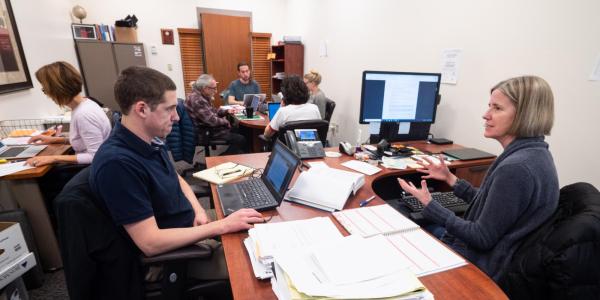 The Korey Wise Innocence Project (KWIP) at the University of Colorado Law School has been awarded a grant from the Fred & Jean Allegretti Foundation to better serve the growing number of volunteer law students and community members who investigate cases of possible wrongful conviction in Colorado. The grant will finance a full renovation of the project’s new office space on the second floor of the law school.

"We are grateful to the Allegretti Foundation for supporting KWIP’s new space in the Wolf Law Building, which will accommodate our growing team of legal fellows and law student volunteers," said KWIP Director Anne-Marie Moyes. "The renovation will allow for a collaborative workspace that also serves as a hub for student learning and engagement."

The project receives new inquiries every week from people serving time in Colorado prisons who claim to be completely innocent of any crime. KWIP has seen significant growth in both the number of incarcerated individuals seeking help and volunteers over the last few years.

The grant will allow the project’s office to move into a larger space on the second floor of the law school, which will be renovated to include two small offices, and purchase additional office furniture and equipment. The new space, more than double the size of the project’s previous office, will house Moyes; the project’s new legal fellow Kathleen Lord, who begins in September; a soon-to-be-hired postgraduate fellow; and a growing number of law student volunteers.

Kim Allegretti (’91) hand-delivered the check to Moyes and Clinical Professor Ann England on behalf of her family's foundation.

Around 20 Colorado Law students, retired lawyers, and undergraduate students volunteer with the Korey Wise Innocence Project each year. Moyes anticipates that number will be able to grow to around 30 with the larger space.

The Korey Wise Innocence Project evaluates innocence claims of incarcerated individuals in Colorado to see if there are factual and/or legal grounds to bring their case back into court. In the most promising cases, KWIP tries to develop new evidence of innocence and then engages in litigation to overturn the conviction.

The project recently started a new effort to identify convictions based on flawed forensics, meaning forensic evidence that has since been exposed as unreliable or invalid. In these cases, the project can hire experts to reexamine old physical evidence or prior testing and expose outdated science that resulted in a wrongful conviction.

When the Korey Wise Innocence Project moved to its current home at Colorado Law in 2010, it was a volunteer-run organization overseen by England and Professor Emeritus Pat Furman (’80). In 2015, thanks to a gift from Korey Wise, the project was renamed in his honor and able to hire its first full-time staff member, a role now held by Moyes.

The project received international attention in 2019 after the release of the Netflix docuseries When They See Us, based on the wrongful convictions of Wise and four other Black and Latino teenagers who became known as the "Central Park Five."

- When They See Him, Amicus alumni magazine, Spring 2020