Finland's Minister of Justice Anna-Maja Henriksson visited the University of Colorado Law School on Dec. 12 to discuss the situation of indigenous peoples in the U.S. with Colorado Law and CU Boulder faculty and community partners. 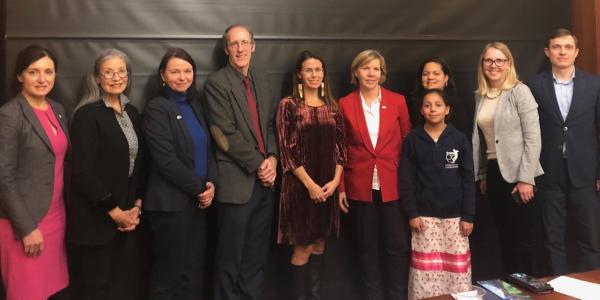 “We were delighted to welcome Minister Henriksson and her delegation to Colorado Law," said Kristen Carpenter, Council Tree Professor of Law and director of the American Indian Law Program at Colorado Law. "Minister Henriksson’s office had questions about key issues in federal Indian law, including the jurisdiction of tribal governments over their lands and members, the determination of identity and tribal citizenship, and programs for maintaining indigenous language and culture. We had a good conversation about some of the similarities and differences with regard to the Sami indigenous people in Finland.”

The delegation met with Dean S. James Anaya; Andrew Cowell, professor of linguistics and director of the Center for Native American and Indigenous Studies; Felicia Naranjo Martinez, executive director of the Colorado European Union Center of Excellence; Alexey Tskykarev, chair of the Center for Support of Indigenous Peoples and Civic Diplomacy and member of the United Nations Permanent Forum on Indigenous Issues; and Danielle Lazore-Thompson, American Indian Law Program Fellow.

"Together with CU’s Center for Native American and Indigenous Studies, we helped arrange contacts with the Native American Rights Fund, as well as Right Relationship Boulder, an organization that fosters relationships with the Northern Arapaho tribe that is indigenous to this area," Carpenter said. "We also discussed opportunities for collaborations with Finnish universities regarding indigenous peoples’ issues in the future." 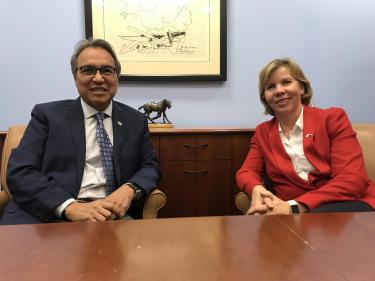