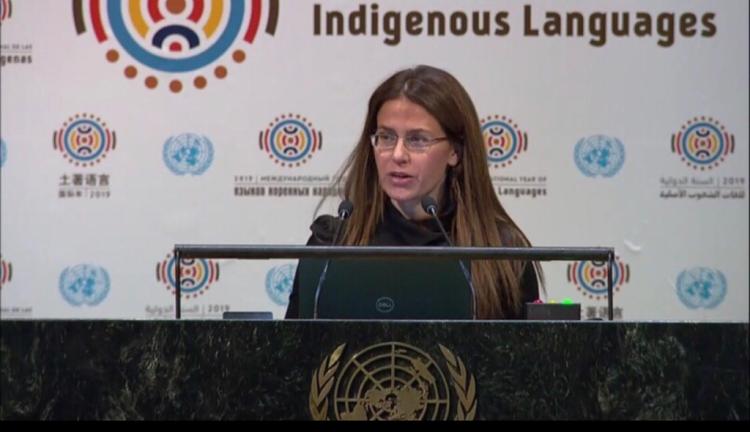 Speaking on behalf of the United Nations Expert Mechanism on the Rights of Indigenous Peoples (EMRIP), of which she serves as the North American member and vice chair, Council Tree Professor of Law Kristen Carpenter delivered a statement about indigenous languages to the U.N. General Assembly in New York on Feb. 1. The event marked the beginning of the International Year of Indigenous Languages.

“Through a decade of study, the Expert Mechanism has come to understand that language rights may mean the difference between life and death,” Carpenter said in her remarks. “For many indigenous peoples, the right to use one’s language—and be understood in it—is absolutely necessary to receive medical and health services, to have access to justice and legal representation, to secure education and employment, to engage the media, and express freedom of conscience. The right to use indigenous language implicates not only individual rights to enjoy a life of basic dignity, but also the collective survival and flourishing of indigenous peoples.”

The event offered an opportunity for member states and relevant stakeholders to exchange views and best practices about the preservation, promotion, and revitalization of indigenous languages. The ultimate goal of the International Year of Indigenous Languages is not only to celebrate indigenous languages and draw the international community's attention to their vitality, but also to expand language policies and negotiate new, more effective language safeguarding strategies, the EMRIP wrote in a statement.

Carpenter was appointed the North American member of the EMRIP in March 2017 and is one of seven regional members from Africa, Asia, the Arctic, Europe, South America, and the Pacific.

A subsidiary body of the Human Rights Council, EMRIP’s mandate is to provide the council with expertise and advice on the rights of indigenous peoples, as set out in the United Nations Declaration on the Rights of Indigenous Peoples, and to assist member states, upon request, in achieving the ends of the declaration through the promotion, protection, and fulfilment of the rights of indigenous peoples.