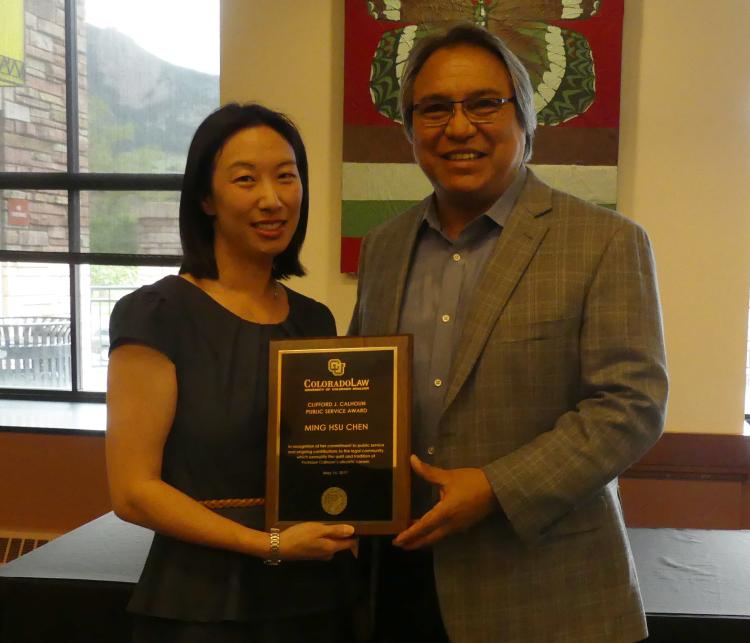 On May 16, 2017, Associate Clinical Professor Violeta Chapin and Associate Professor Ming Chen received this year’s Clifford Calhoun Public Service Award for their work with immigrants and the University of Colorado Boulder’s international community in the wake of President Trump’s three immigration-oriented executive orders.

“In a time of uncertainty, legal upheaval, and fear, both Ming and Violeta have worked with the university administration to educate not only our international students, but also our scholars, on the ramifications of the orders, setting an excellent example of how one’s work can fulfill organically the chancellor’s strategic imperatives to shape tomorrow’s leaders and positively impact humanity,” said Dean S. James Anaya. “Ming and Violeta advocate for immigrants in different ways and they each build upon their unique talents and backgrounds to serve communities in need of a voice.”

Chapin leads the Criminal and Immigration Defense Clinic, where she draws on her considerable practice experience as a public defender both to teach clinical students and to represent defendants and immigrants.

“In a time of uncertainty, legal upheaval, and fear, both Ming and Violeta have worked with the university administration to educate not only our international students, but also our scholars, on the ramifications of the orders, setting an excellent example of how one’s work can fulfill organically the chancellor’s strategic imperatives to shape tomorrow’s leaders and positively impact humanity." - Dean Anaya

One instance that illustrates Chapin’s dedication to serving the public occurred after the presidential administration announced its immigration executive orders on a weekend in late January. Along with Legal Writing Professor Megan Hall (’05), Assistant Clinical Professor Blake Reid (’10), and other lawyers, she spent the remainder of the weekend at Denver International Airport, assisting visa holders who suddenly found themselves in a bureaucratic maze. She then pivoted the focus of her clinic to representing members of the university community who feared the immigration orders might prohibit them from re-entering the country.

“Violeta’s responsiveness and commitment to service are both a beacon for those in need and a reminder to all of us of that our chosen profession need not be, in fact must not be, relegated to the ivory tower, but remains crucial to the greater global community and—perhaps more poignantly—countless individuals, as we navigate our new future,” Anaya said.

January’s executive orders also threw a sudden spotlight on Chen’s highly respected work on executive action in the field of immigration. In the intervening months, she has brought forward and drawn upon her nationally recognized scholarship in the areas of immigration and citizenship to inform both university administration and CU’s community of international students and scholars.

“Ming entered the fray and chose to devote herself to informing the international community about their rights, soothing fears without blurring the reality of possible dangers,” Anaya said. “Her steadfast commitment to sharing her expert knowledge provided calm within the storm, allowing individuals to find purchase and begin to chart a new path.  She did this on top of continuing to teach and write, demonstrating that scholarship can, as it must, both teach and serve. “

Through their scholarship, research, and activism, Chapin and Chen have demonstrated how the work of Colorado Law faculty can be scholarly, enlightening, deeply engaged with the community, and of service to communities in hours of urgency and need.

The Clifford Calhoun Public Service Award, established in 1998 by an anonymous donor, is given annually to a faculty or staff member who contributes to the public service of the law school in the spirit and tradition of the contributions made by Professor Emeritus Clifford Calhoun during his 29-year law school career.

Pictured: Chen, who accepted the award on behalf of herself and Chapin, and Anaya.