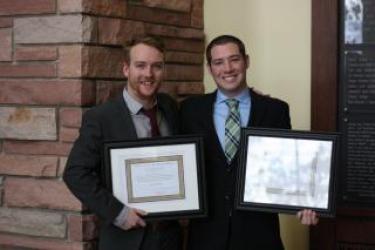 On Friday, November 4, 2016, Sean Keefe (’17) and Parker Steel (’17) were named national champions of the 6th Annual Intellectual Property LawMeet, based on draft agreements they submitted and their performances in negotiations in which the judges acted as counsel for the opposite side.

They also placed first and received the “Best Draft” award in the Midwestern regional competition held in October at Loyola University School of Law in Chicago.

Keefe and Steel were among six teams that competed in the national rounds, which were hosted by the Philadelphia offices of BakerHostetler LLP, with teams competing via video conference. This year’s problem involved the drafting and negotiation of a software development, license, and hosting agreement between an education technology company and a company that provides training solutions for home health aides.

“It has been a huge honor to represent Colorado Law in the LawMeets Competitions and to be a part of such a successful transactional program during my tenure as a student,” said Steel. “These competitions have greatly increased my confidence in my drafting and negotiating abilities and I feel much better about entering the workforce with practical experience under my belt. Moreover, the competitions themselves are a ton of fun and I have had the pleasure of meeting and learning from practicing attorneys and other law students from across the United States. We couldn’t be happier that we were able to bring home CU’s first IP LawMeets national title.”

A second Colorado Law team was also recognized at both the regional contests held in October and the national rounds. Christopher Cummins (’17), Marcela Dye (’18), and Kristine Yates (’17) took first place at their regional competition at Baylor Law School earlier this fall, and received the “Best Draft” distinction at the national championship for their contract representing the licensee.

In addition to the transactional and IP competitions, LawMeets has expanded to offer specific transactional competitions for different areas of legal focus. LawMeets also offers a bankruptcy competition and start-up competition, in which Colorado Law will compete beginning in December 2016.