A Banner Semester for the American Indian Law Clinic

A critical component of the Clinic is to get out of the classroom and into communities. Under the leadership of the director, Christina Stanton, students have been able to directly observe on-the-ground impacts of the laws they have been researching and analyzing on behalf of their clients. This work has helped students to articulate the ways in which laws have disparate impacts on tribal communities. Client work and reflections on the current political climate and important issues facing Native Nations has grounded students in the modern state of affairs and to consider the important role of Indigenous attorneys and their allies in the efforts to uphold Native sovereignty. 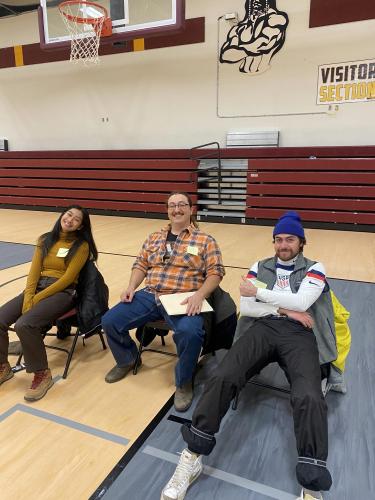 The students identified the ways in which Native voters face a unique set of issues when both registering to vote and casting their ballots. For example, in Montana, Native voters on one reservation must drive 120 miles to reach a voter registration site. Without online registration, this is the only option to then be eligible to cast a ballot in November. Although mail-in voting is appealing to many voters, and something that is accessible in the state of Colorado, Native Americans are not always able to take advantage of this due to lack of traditional addressing and postal delivery on reservations.

After conducting this research, the students developed language for the Natives Vote website so that Native voters had a resource tailored to the information they need to vote. This included whether states provide materials in Native languages, state laws on mail-in and absentee ballots, how to get an address if one does not have a “traditional” address as described the state, and what types of identification are needed to register and vote.

For the mid-term November elections, the entire Clinic travelled to North Dakota to provide poll observation to support the Native American Rights Fund’s voter protection efforts. Four groups of clinic students were sent out to polling locations near the Turtle Mountain Band of Chippewa Indians and Spirit Lake Tribes’ reservations.

North Dakota is the only state that does not have voter registration. The students imagined this would make voting easier as it removed one large obstacle for Native voters, but the reality was much different. The students noted that many people showed up to the wrong polling place, because the state had not notified them of the correct polling location. Others faced challenges squaring their address on their ID with the address the election officials had on file in their electronic system. While they observed confusion about specific election laws, the students also observed a sense of community familiarity and a willingness to help people cast ballots if they chose. They met individuals who were voting for the first time or voting with a tribal ID they had obtained just the previous day. 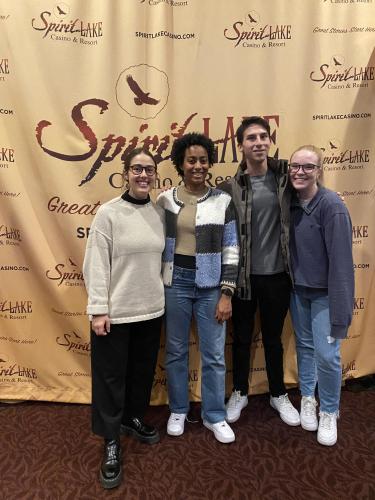 Building Capacity within our Colorado Community

Students have also had the opportunity to work on building outreach programs in addition to clinical practice. These moments not only help to grow awareness of contemporary Indigenous issues and ways to build allyship, but they also hone the students' presentation skills. Ms. Manceaux has also contributed to these efforts. She said, 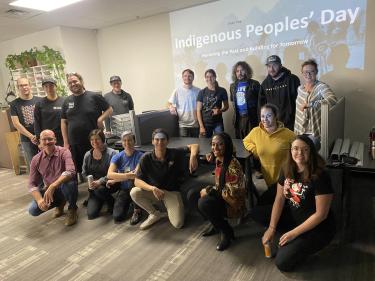 “Learning American Indian law really changed my legal perspective and what I want to do with my career. It also inspired me to be involved in outreach programs where I and other students can teach the community about the importance of understanding Native American history and how current events impact all of society.”

Ms. Manceaux and Joshua Bertalotto '24 presented to local company, Rowdy Mermaid, on Indigenous Peoples’ Day in October 2022. They discussed the ramifications of critical moments in history, such as allotment and removal, and offered employees ways to engage with Native American tribes and support tribal sovereignty in their professional and personal lives. “It was rewarding to meet people where they were and give them solutions on how to make positive, individual changes,” Manceaux said.

Following her participation in the Byron R. White Center for the Study of American Constitutional Law Constitution Day Project in September, Ms. Manceaux organized a day to discuss tribal sovereignty with high school students at Northglenn High School in Broomfield, CO. To anchor the conversation in modern issues, she taught students about what tribal sovereignty looks like in practice by addressing the case Brackeen v. Haaland, which is currently in front of the United States Supreme Court. Ms. Manceaux watched how students grappled with the concept of tribal sovereignty within the complex case of Brackeen, highlighting multi-party interests and the duty that the United States has to tribes.

As the clinic students gain the practical experience of lawyering on behalf of Indigenous Peoples, they are also encouraged to consider how to best live the values of client-centered lawyering.

“We approach this work with a constant reminder of our north stars: tribal sovereignty and self-determination. I ask that each student interrogate how they show up as lawyers, as students, and as humans and how we can do better to incorporate these north stars in our practice,” Stanton said.

Thanks to Siena Kalina, Michele Manceaux, and Kate Newman for their contributions to this article.