Across the world, experts estimate that one language dies every two weeks, and with it, unique modes of communication, cultural knowledge, and religious practices. In the U.S.—as most tribal nations are battling language extinction and dormancy following federal assimilation policies—researchers in law and linguistics at the University of Colorado are working with Indigenous leaders to identify best practices in language revitalization and to propose reforms to law and policy.

The 54th Algonquian Conference: Launching the International Decade of Indigenous Languages, hosted by the Center for Native American and Indigenous Studies (CNAIS) and the University of Colorado Law School with support from an Innovative Seed Grant from the Research and Innovation Office (RIO) and the Department of Linguistics, will be held Thursday, October 20 through Sunday, October 23 at the law school. Speakers from the United Nations, U.S., and Canada will address both the causes of language loss and opportunities for revitalization.

Register for the conference here.

“The United Nations declared the International Decade of Indigenous Languages 2022-2032 to address the dire situation of Indigenous languages globally and promote a plurilingual future where all peoples are free to speak and communicate in their mother tongues,” said Aleksei Tsykarev, Vice Chair of the United Nations Permanent Forum on Indigenous Issues. A lifelong language activist and human rights expert, Tsykarev will give the conference’s opening address on Thursday, Oct 20, at 5 p.m.

For American Indian tribes in the U.S., addressing language loss is an urgent matter. The Cherokee Nation of Oklahoma, for example, has reported only 2000 first language speakers out of a population of over 400,000 tribal members. These figures are not accidental. As the federal government’s 2022 Investigative Report revealed, the United States operated “boarding schools” for over 100 years to “assimilate” Indigenous children by requiring them learn English, Christianity, and manual labor. Children who spoke their Indigenous languages were punished, often severely so, and many died in these institutions. Intergenerational transmission of Indigenous languages nearly ceased, and Indigenous Peoples lost their traditional means of communication and speech, as well as religious, cultural, scientific, political, and familial practices relying on concepts and worldviews expressed in Indigenous languages.

“Language rights are human rights,” said Council Tree Professor of Law and Director of the American Indian Law Program Kristen Carpenter. “Governments, including the United States, have an obligation to remedy past oppression and support Indigenous communities in their language revitalization.” Carpenter is co-chairing the conference with Professor Andy Cowell and Professor Alexis Palmer in the Department of Linguistics.

The conference will culminate in a special issue of the University of Colorado Environmental Law Journal entitled Visions for the International Decade of Indigenous Languages, including Indigenous leaders’ hopes and expectations for the Decade, as well as current research computational linguistics and self-determination in language education. 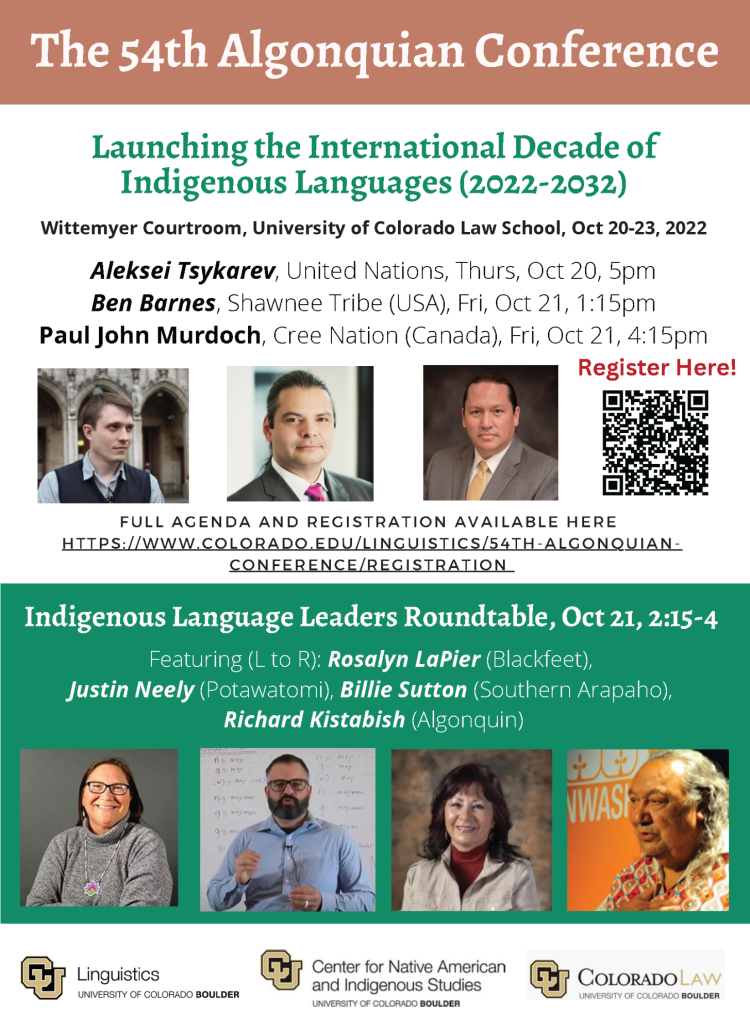