Scholars, lawyers, community leaders, students and activists from across the country gathered on April 8, 2022 for the University of Colorado Law School’s 30th Annual Ira C. Rothgerber Jr. Conference: Looking Back to Move Forward: Exploring the Legacy of U.S. Slavery. This year’s conference built upon Colorado Law Dean Lolita Buckner Inniss’s book, “The Princeton Fugitive Slave: The Trials of James Collins Johnson.” Speakers throughout the conference examined the realities and repercussions of slavery and the impacts that echo through our society today. 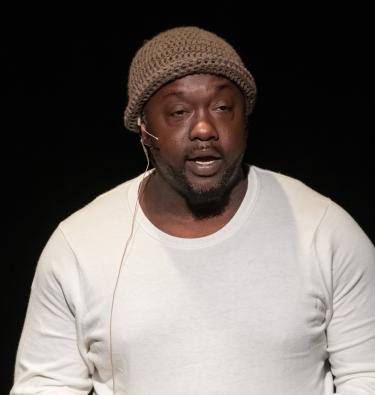 Colorado Law’s Byron R. White Center for the Study of American Constitutional Law hosted the Rothgerber Conference, which was co-sponsored by the Center for African and African American Studies. The Center’s director, Moses Lasky Professor of Law Suzette Malveaux, spearheaded the event. The Rothgerber Conference benefitted from a wide range of perspectives which included historians and legal scholars, doctrinal and clinical faculty, policymakers and formerly incarcerated leaders, who all contributed to vibrant discussions of systemic racism and the legacy of slavery.

The conference also highlighted the impact of the legacy of slavery on people’s day-to-day experiences. On April 7th, Motus Theater presented JustUs: Stories from the Frontlines of the Criminal Legal System and the Legacy of Systemic Racism and Slavery. The JustUs program included monologues by formerly incarcerated persons, with musical reactions to their monologues performed by Spirit of Grace and a poetry reading by Dominique Christina, an acclaimed writer, performer and social activist.  The monologists from Motus Theater - Dereck Bell (pictured in photograph by Noah Katz on the right), Juaquin Mobley, and Colette Payne - told their personal stories leading up to their incarceration and their experiences while incarcerated.  Professor Malveaux joined Dereck Bell in the telling of his story, an experience which she described as a gift. The JustUs performances provided a powerful framework and grounding for the panels the following day.

The conference opened with a discussion of The Princeton Fugitive Slave between Dean Inniss and Dr. Hilary Green, an Associate Professor of History in the Department of Gender and Race Studies at the University of Alabama. Dean Inniss described the research process and the difficulties she faced in bringing justice to James Collins’ story. 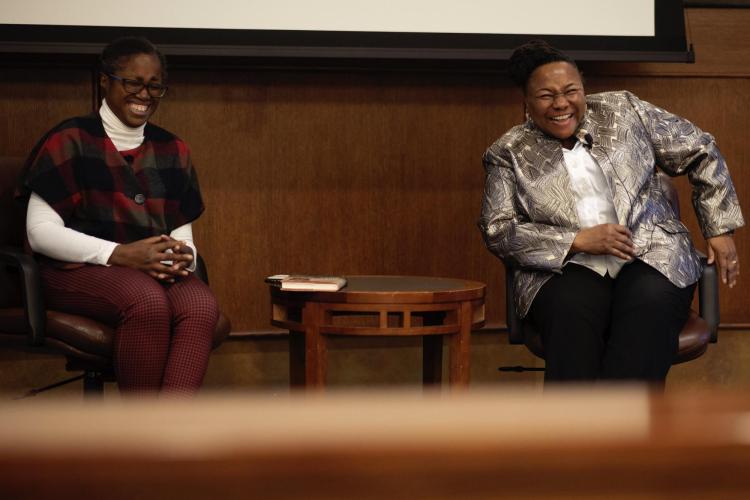 “These archives were not set up to record these lives,” responded Green, highlighting an important theme of the conference.

The book chat was followed by a roundtable discussion, “The 1921 Tulsa Race Massacre: The Quest for Accountability.” The roundtable reunited members of the original team who brought constitutional claims over two decades ago to recount the history of the 1921 Tulsa Race Massacre and discuss past and future efforts to bring this history to light, to make victims whole, and to hold the government accountable. 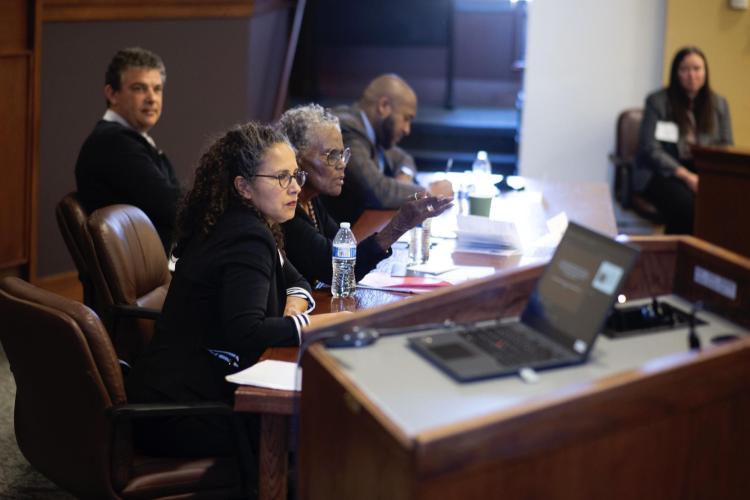 Three panels organized by the Byron White Center elaborated on these themes.

The first panel, titled “Institutional Complicity in American Slavery: The Role of the Judiciary and Higher Education,” explored the role the judiciary and higher educational institutions played in upholding and perpetuating slavery and its legacy, and investigated the forgotten histories of those whose stories were never told. 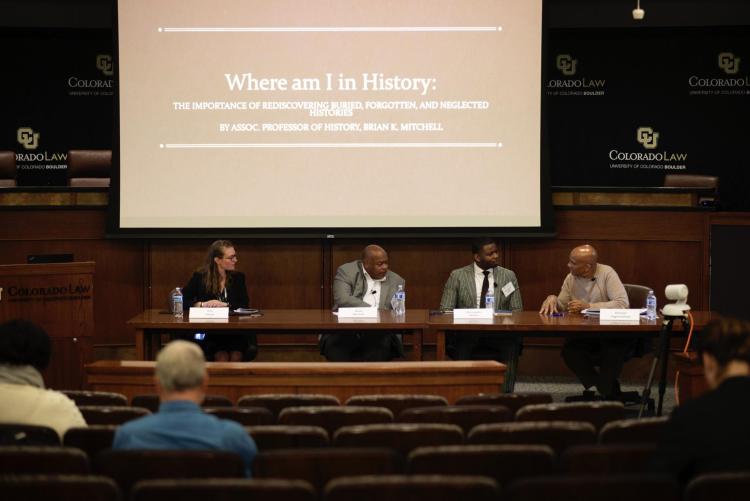 The second panel, “Vestiges of Slavery in the Criminal Justice System,” explored the impact of slavery in the modern criminal justice system, including the role that slave law played in shaping criminal law, systemic racism, disparate policing, and collateral consequences of incarceration. 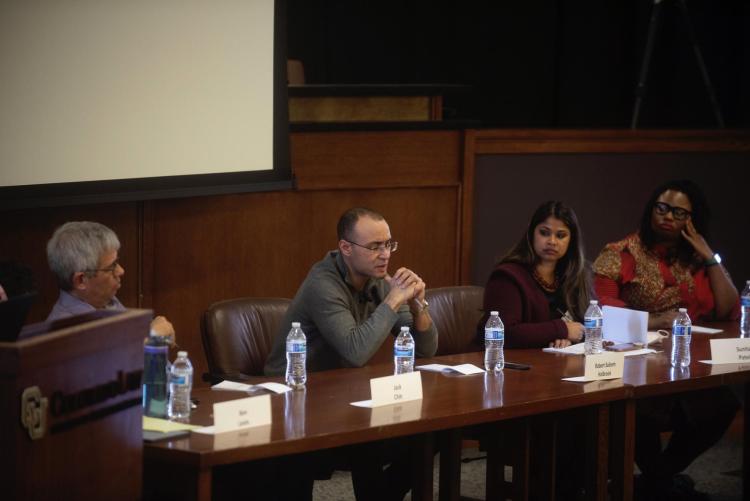 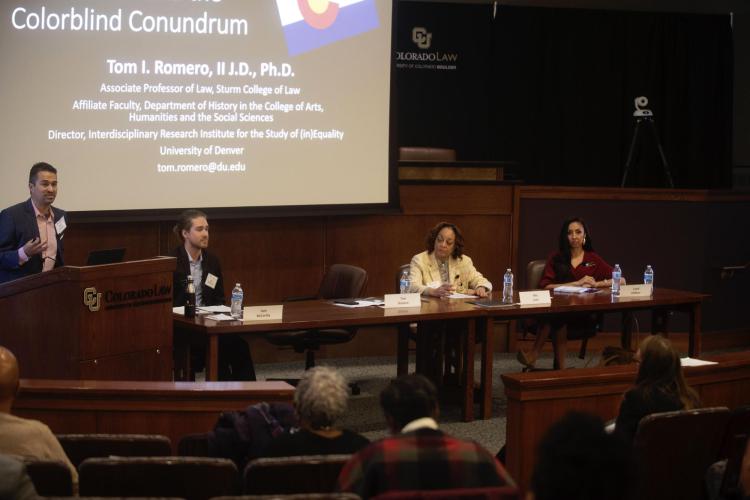 Closing remarks were provided by Professor Reiland Rabaka, a Professor of African, African American, and Caribbean Studies in the University of Colorado and the Department of Ethnic Studies and the Founding Director of the Center for African & African American Studies. Rabaka emphasized the importance of having discussions like the ones held at the conference, adding, “This is what decolonization looks like.”

After the conclusion of the conference, panelists, staff, attendees, and student fellows celebrated in true Boulder fashion—enjoying a wonderful dinner together and a group hike at Chautauqua Park. A full recording of the conference is available on YouTube.

Selected remarks and articles from the conference will be published in the upcoming Rothgerber Symposium issue of the University of Colorado Law Review’s 94th Volume, to be published in January 2023.

Biographies of all panel participants can be found here in the event's program.