'Self-Determination and Resilience': Insights on Human Rights in Practice

Last spring, University of Colorado Law School Professor Kristen A. Carpenter concluded two terms as the North American member of the United Nations Expert Mechanism on the Rights of Indigenous Peoples. Her work connecting international human rights standards to domestic policy, however, is far from over.

Comprising seven individuals, EMRIP is tasked with advancing Indigenous Peoples’ human rights around the world. During her two terms, Carpenter worked on matters involving Indigenous Peoples in Brazil, Canada, Democratic Republic of Congo, Finland, Japan, Kenya, Mexico, Russia, South Africa, Sweden, Thailand, and the United States. She provided advice on issues including Indigenous Peoples’ rights in the context of migration and borders; free, prior, and informed consent; land; the well-being of children; and cultural rights.

Alexey Tsykarev, former EMRIP member from the Russian Federation and Eastern Europe, said that Carpenter was “strong and strategic, smart and open-minded, while speaking at the U.N. General Assembly, meeting ambassadors, drafting studies, and leading negotiations. She showed compassion and solidarity even with those who had different views; her sense of justice and ability to build on collective wisdom were a source of inspiration.”

Carpenter notes that she could not have taken the position without the support of colleagues and students at Colorado Law.

Colorado Law has a decades-long commitment to federal Indian law, going back to American Indian alumni of the late 1960s and early 1970s including Vine Deloria ('70) and Thomas Fredericks ('72). The late Dean David H. Getches, along with Professors Rick Collins, Carla Fredericks, Sarah Krakoff, Jill Tompkins, and Charles Wilkinson, established an unparalleled reputation for scholarship, teaching, and service to tribes in the U.S. through Colorado Law’s American Indian Law Program.

With the arrival of Dean S. James Anaya, the law school embraced the internationalization of the field. Before becoming dean, Anaya served for six years as the U.N. Special Rapporteur on the Rights of Indigenous Peoples and authored major texts on Indigenous Peoples and self-determination. When the EMRIP position in North America opened, Anaya encouraged Carpenter to enter into the nomination and vetting process, including letters of support from Indigenous Peoples and interviews by a group of ambassadors based in Geneva.

Once appointed by the president of the Human Rights Council in 2017, however, Carpenter’s first trip was not to an international destination but rather to Oklahoma. Judge Greg Bigler invited Carpenter to meet with Muscogee, Cherokee, Shawnee, Euchee, and Seminole ceremonial leaders who had been following activities at the U.N. since the 1970s when the Muscogee leader Philip Deere had gone to Geneva advocate for his people.

“For us as traditional people, the goal of engaging with the U.N. is to better protect our unique identity, culture, and society,” Bigler said.

For Carpenter, the visit emphasized the importance of being grounded at home. “It was clear to me that while I might be traveling all over the world, I should keep the concerns and values of American Indian cultural leaders very close to my heart,” she said. 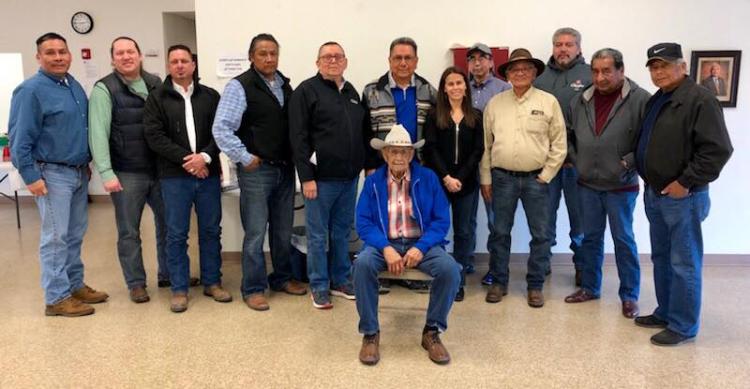 In 2019 Carpenter was elected to serve as EMRIP’s chair-rapporteur, a role that exposed her to the challenges of diplomacy and the urgency of human rights. That summer, several Indigenous representatives who spoke at EMRIP’s annual session faced reprisals in their home countries, including the killing of family members and destruction of their home villages. Carpenter held meetings with ambassadors from those countries, urging investigation and protection for the Indigenous human rights defenders. Some of her fellow EMRIP members also faced reprisals, losing their jobs at home or being denied entry into other countries.

“States are not always eager to have an international human rights body come into their sovereign territory,” Carpenter said. “Even though EMRIP’s mandate aims for constructive solutions, versus critical reports, it still took many discussions to arrive at a mutually amenable plan and then carry it out in a meaningful way.”

In Mexico City, EMRIP worked with Indigenous Peoples and the government regarding the implementation of a new constitution, the first to explicitly adopt the U.N. Declaration on the Rights of Indigenous Peoples.

During a visit to an Indigenous community within the city boundaries, Carpenter recalled leaders taking out documents written in the Nahua language that dated back to the 1500s, raising the issue of how the new law would intersect with the old. In some of the Indigenous villages, women did not have access to information about political developments in Mexico City. EMRIP members brought these questions and other issues back to training sessions with government ministers to advance attentiveness to Indigenous rights.

In 2020, following two years of preparation, EMRIP facilitated a dialogue between the Yaqui people and the Swedish Museum of World Culture, which led to an historic agreement in principle to repatriate the Maaso Kova, a ceremonial deer head. The deer head had been acquired from the Yaqui decades earlier when they were relocated from their homelands by the Mexican army. Carpenter, drawing from her expertise in cultural rights, served as EMRIP’s lead member on this matter. 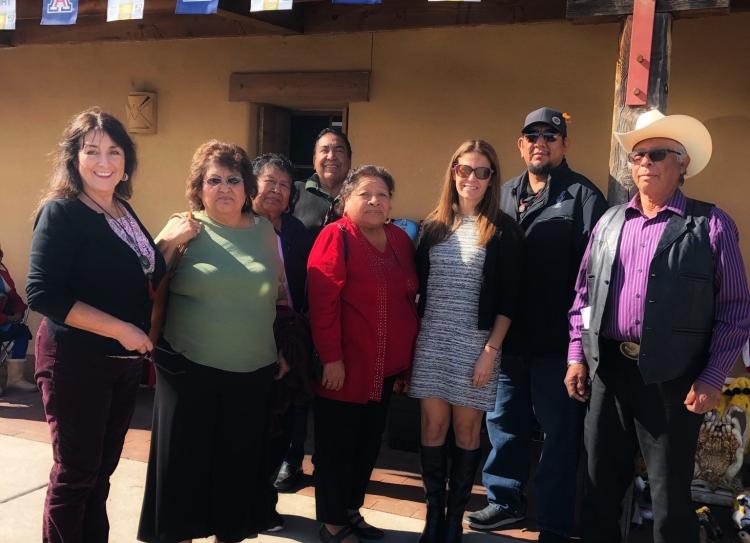 The Yaqui delegation informs Carpenter about their claim for repatriation of a ceremonial object from the Swedish Museum of World Cultures.

“EMRIP’s engagement produced advances for other Indigenous Peoples engaged in repatriation efforts, including endorsing the establishment of an effective international mechanism for repatriation based on the recognition of Indigenous Peoples’ own laws governing the use and treatment of our sacred items in accordance with Article 11 of the U.N. Declaration,” said Andrea Carmen, executive director of the International Indian Treaty Council.

Together with counterparts at the Native American Rights Fund (NARF), Carpenter co-founded the NARF-Colorado Law Project to Implement the U.N. Declaration on the Rights of Indigenous Peoples in the United States. The project seeks to provide education and access regarding international human rights frameworks as tools in American Indian law challenges. Carpenter’s role at the U.N. coupled with her relationships in tribal communities, helped bridge a gap between the human rights sphere as it exists in spaces like the U.N. and the realities lived by those in marginalized communities.

Edyael Casaperalta ('18) attended sessions on the Tohono O’Odham Reservation in Arizona and in Chiang Mai, Thailand, which contributed to EMRIP’s study on Indigenous Peoples’ rights in the global migration context. Casperalta assisted with the first report of the NARF-Colorado Law Project, as well as its inaugural conference in 2018 that brought together lawyers and non-lawyers to discuss the needs of Indian country. Casaperalta was recently named senior policy advisor for the Rural Utilities Service Agency in the Department of Agriculture. 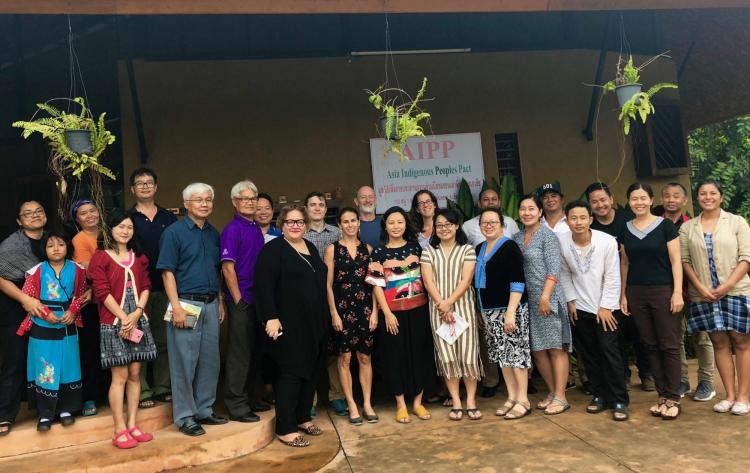 While students at Colorado Law, Marissa Weber (‘19) and Cierra White (’19) attended EMRIP’s annual session in Geneva. Weber went on to become an attorney with the International Criminal Court and is now an assistant district attorney in New York. White is a partner at a firm in Florida, licensed to practice before the Poarch Creek Tribal Court.

“Professor Carpenter’s personal expertise was both inspiring and incredibly helpful in understanding how and why Indigenous Peoples law should be conceptualized as a relevant matter in all areas of study and practice,” said Payan, who has since worked on Indigenous Peoples’ issues at the U.S. Agency for International Development.

In one of EMRIP’s last engagements before the COVID-19 pandemic, Noriana Franco Novoa (LLM ’20), together with former American Indian Law Program Fellow Danielle Lazore-Thompson, assisted with a seminar at the University of British Columbia regarding the repatriation of human remains and sacred objects. Novoa applied her experience as a lawyer in Colombia, as well as Spanish language skills, to help EMRIP draft a report urging that international covenants such as the UNESCO 1970 Convention should be interpreted consistent with the U.N. Declaration’s recognition of Indigenous Peoples’ rights to culture, religion, and property. 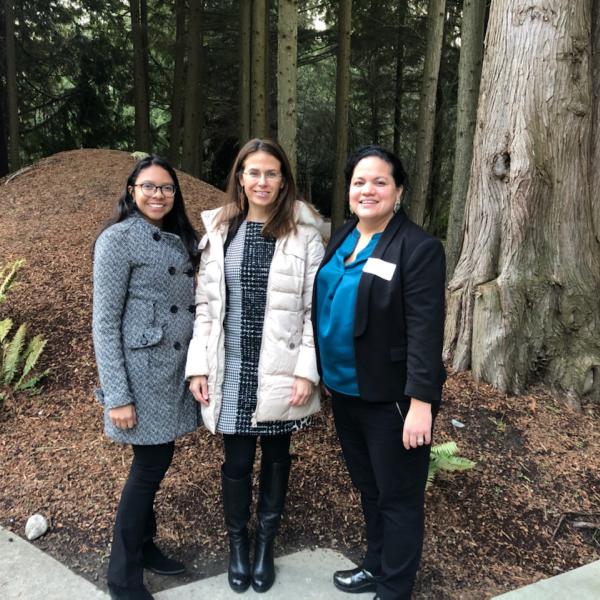 Current American Indian Law Program (AILP) Fellow Kevin Miller (’20) recently accepted Carpenter’s offer to extend his fellowship through the 2021-22 academic year. They, along with Native American Rights Fund staff attorney Sue Noe, will travel to Indigenous communities in North America to engage in discussions with tribal leaders interested in better understanding how international human rights documents can be given power through tribal-level implementation.

The Colorado Law team, together with colleagues in CU Boulder’s linguistics department, are also deeply involved in preparations for the U.N.’s International Decade on Indigenous Languages, which spans 2022-2032, again helping to ensure that Indigenous Peoples will have a seat at the table when it comes to international measures to advance language rights.

Reflecting on Human Rights and Relationships

“What surprised me most in my five years was just how much the world’s Indigenous Peoples have in common, despite different local circumstances,” Carpenter said. “From the Sami people of Norway to the Khoi and San of South Africa, the Karen people of Thailand to the Mapuche of Chile, and of course the many tribes here in the United States, Indigenous Peoples are closely tied to the land, to ceremonial ways of life, and the collective well-being of their people. They are resilient and determined, even after so many years of conquest and colonization, and in the face of the pandemic, to survive as distinct peoples.”

And what about realizing human rights? There are no easy answers, Carpenter said.

“Indigenous Peoples are leaders in human rights both because their situation is often so tenuous and because they have such deep traditions of humanity and relatedness. They teach about healing past harms and fostering wellbeing for the future. But it’s a long-term commitment. Indigenous Peoples embrace a concept of 'the Seven Generations' in which each person’s responsibility is tied to their relatives in an intergenerational web looking forward and back. This is the model that I am trying to follow and share with my students,” she said.