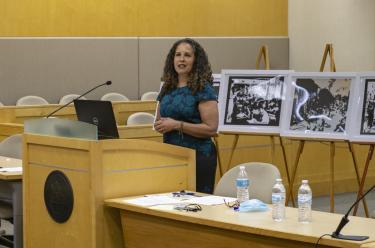 To commemorate the 100th anniversary of the 1921 Tulsa Race Massacre, University of Colorado Law School Provost Professor of Civil Rights Law Suzette Malveaux spoke about her pro bono work representing the survivors of what is widely known as one of the worst race massacres in U.S. history.

In a May 21 keynote address at a symposium hosted by the Tulsa Law Review at the University of Tulsa College of Law, Malveaux discussed her work serving for six years as pro bono counsel to the plaintiffs in Alexander v. State of Oklahoma, a suit filed in federal court in 2003 against the city of Tulsa on behalf of more than 130 survivors of the 1921 massacre. The plaintiffs asserted that the government violated the constitutional rights of Black citizens when it deputized and armed a white mob who attacked residents, homes, and businesses in the predominantly Black Greenwood district of Tulsa, Oklahoma, in 1921.

"It felt great to share about a case that shaped and inspired my career as a civil rights lawyer," Malveaux said. "When I left civil rights practice after eight years and entered academia (where I’ve been for the last 18), there’s only one case that I held onto during that transition and it was Tulsa. These were formative years for me and I’m grateful to have had the privilege of working on it with an amazing team of lawyers." 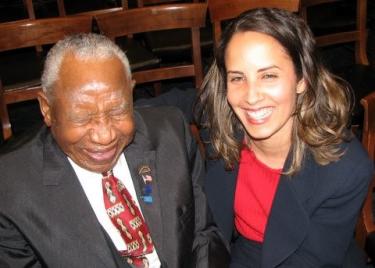 The case was dismissed two years later because of a two-year statute of limitations, leading counsel to travel across the country telling the story of the Tulsa race massacre and the need for justice. Over the next several years, Malveaux and a team of attorneys represented the plaintiffs before the U.S. federal courts, the Inter-American Commission on Human Rights (Organization of American States), and the U.S. House of Representatives. Malveaux argued for tolling, or suspending, the case’s statute of limitations. The federal courts rejected this argument, leading Malveaux to pursue this theme in her scholarship and teaching. Some of the original lawyers are pursuing a new case in state court and renewed legislation on the massacre’s centennial.

At last week’s symposium in Tulsa, Malveaux shared her experience of what it was like to fight for clients over 100 years old who were attempting to be heard and vindicated for their loss.

"One of the main things I’ve learned about what it takes to be engaged in transformative justice is it requires a lot of creativity.  And sometimes, when you don’t reach the goal post, you move it and claim victory," she said. "You have to be willing to redefine success—which is the story of our efforts to seek justice for the victims of the Tulsa massacre. We sought relief via litigation filed in the federal courts, claims brought in international tribunals, legislation introduced before Congress, scholarship published in law reviews, and ultimately an educational campaign waged nationwide. While we didn’t succeed in the traditional sense of the law, we gave voice and dignity to our clients. It’s important not to give up and not to forget."

The Tulsa Race Massacre, which occurred May 31–June 1, 1921, remains one of the worst incidents of racial violence in U.S. history. The immaculate homes and businesses in Greenwood’s “Black Wall Street” were looted and burned to the ground. News reports were largely squelched and evidence was suppressed, despite the fact that hundreds of Black citizens were killed and thousands left homeless. Millions of dollars in damage resulted, depriving survivors the ability to pass along generational wealth to their descendants. 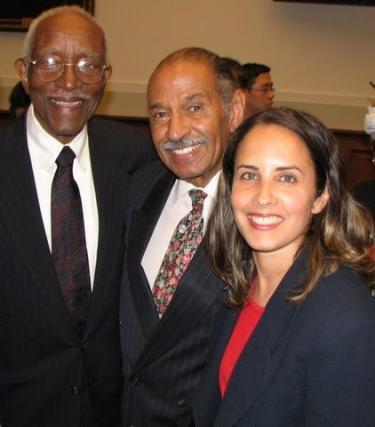 Previous attempts at restitution for survivors have been unsuccessful; however, survivors are still fighting for justice. The last living three survivors of the massacre (aged 107, 106, and 100) testified on May 19 before Congress in support of new litigation and legislation being pursued to bring relief for the survivors and their descendants.

Malveaux joined the Colorado Law faculty in 2017 and serves as director of the Byron R. White Center for the Study of American Constitutional Law. Prior to academia, she was a class action litigation specialist who second chaired oral argument before the U.S. Supreme Court and argued before the 11th Circuit Court of Appeals. She teaches Civil Procedure, Employment Discrimination, and Problems in Constitutional Law.

Watch a recording of Malveaux's keynote.