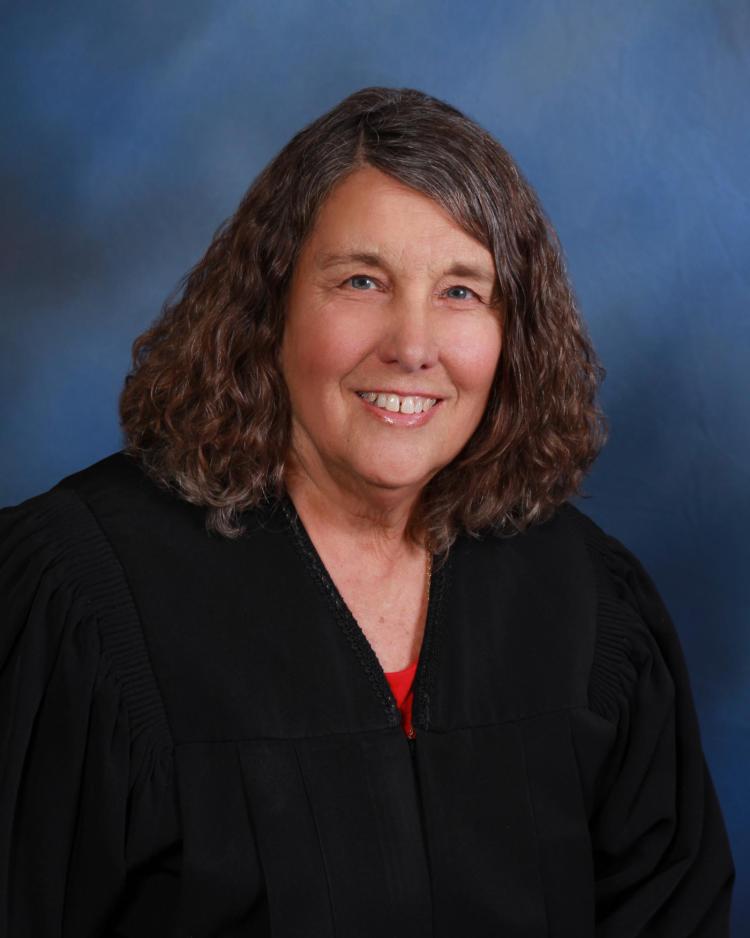 The Hon. Kathleen Croshal (nee Winters) ('79) describes her path as a law student as "untraditional."

Croshal grew up in the suburbs of Cleveland and finished her undergraduate degree at the University of Colorado Boulder. She studied communications and theater and worked in theater management prior to law school. Her choice to attend the University of Colorado Law School for her JD was an easy one, as she was drawn to the ability to be granted in-state tuition. "Law school was much less expensive when I graduated," she said, laughing. "There’s no comparison."

Because of her experience with theater, Croshal planned to pursue communications and entertainment law. In the spring of 1979, she teamed up with visiting professor H. Wales to produce Gilbert and Sullivan’s Trial by Jury. The two met through Colorado Law’s mentorship program. "I agreed to be a third-year mentor and he was assigned a mentoring group that I was also assigned," she said. "That was a particularly interesting and special piece of my third year."

Croshal went through law school as a single parent, to which she attributes the untraditional nature of her path. She worked part-time as a bookkeeper for a small Boulder business to supplement her income and support her two children. When she graduated law school, she landed in Pueblo, Colorado.

"I left Boulder and came to Pueblo and did a brief period as a deputy district attorney," she said. However, she later decided to "put out her own shingle," handling criminal and civil matters with an emphasis on family law. She also considered leaving Pueblo to pursue communications law. But, with children in high school, she was concerned about uprooting them. She decided to get them through high school but then, as she put it with a laugh, "life sort of happened," and she remains in Pueblo today.

"It turned out quite well," she said of staying in Pueblo. Croshal (then Kathleen Hearn) ended up as an attorney in one of Pueblo’s old-line law firms that handled most of the city’s major business clients, including the school district and a local hospital.

When she started working in Pueblo, she was one of only a few women there in the legal profession. "I certainly missed the comradery of the women in law school and in Boulder, because at the time Boulder was a little more forward-thinking about women," she said. She decided to become involved in the Colorado Bar Association, and described the attorneys of Pueblo and the CBA overall as helpful and supportive when she did decide to pursue work on her own. "A lot of them sent me cases," she said.

After wearing various legal hats, she graduated to become a county court judge—a position she held for 15 and a half years. "I really liked it a lot," she said. "I thought it was a really good experience, and I decided at some point that if I was staying in Pueblo, I hoped to get on the bench."

Her decision paid off. After years of litigation and courtroom work, Croshal was very familiar with the duties of the judiciary. This experience helped to land her the position. "In county court you deal with high volume and a lot of routine measures," she recounted. "But, you also get enough very interesting cases to keep it interesting, and you aren’t having to handle issues like murder and taking children away from parents." It was this fact that lead Croshal to deem her time in county courts as an "incredibly good place to be."

Today, one of the many ways Croshal gives back to the legal community is through her involvement with the CBA. Over the years, that involvement has taken a variety of forms including governor and regional vice president. Today, she serves as the CBA president, a role she assumed in July 2019. Her overall commitment to the CBA is three years—one year as president-elect, one year as president and one year as immediate past president.

One of Croshal’s main duties as president is spearheading the CBA’s REFOCUS initiative, a five-year strategic plan that serves as an acronym for the association’s main goals. Some of the components include engaging diverse and statewide populations, retaining members, and utilizing new and young attorneys by integrating them throughout the organization, recognizing that the future of the legal field lies in the hands of current and future generations.

Croshal’s passion for her community is the driving force behind her career and also a motivator of her time spent in nonprofit work. She serves on two review boards in Pueblo—one is for Colorado State University-Pueblo—and has been involved in many organizations, including the Boys and Girls Club of Pueblo County and the Pueblo Arts Alliance. She also started an annual fundraising event in town called the Pueblo Historic Ghost Walk that raises money for the Pueblo Domestic Violence Community Task Force. It is through this event that she was able to reconnect with her love of theater, as she produces and directs the walk highlighting Pueblo’s history with the help of spooky actors playing some of Pueblo’s most prominent historical fixtures.

Croshal is a wife, mother, and grandmother and likes to spend her free moments with family. She and her husband Jim have a blended family—between them they have seven children and 13 grandchildren, and have also hosted six foreign exchange students from Germany, Italy, Russia, and Tajikistan. "Family is very important," she said. "There are a lot of family activities."

The couple also enjoys travel but hasn’t done much of that this year. "The CBA is keeping me pretty busy!" she said.

She also loves playing bridge—a hobby that she picked up while in law school. "I had a few friends and we played bridge over the lunch and sometimes on Friday and Saturday nights," she recalled. "I didn’t do it for many years because I was too busy being a lawyer, wife, and mother, but now that I’m semi-retired, I’ve taken it up again." In a sense, she’s come full circle.

Last month, Croshal celebrated her 40-year class reunion during Colorado Law’s Homecoming and Reunion Weekend. "It’s good to stay connected when you can," she said.

To current law students who may be experiencing challenges, Croshal made a point to say, "It’s okay to say that it’s not good." She recalls her time going through law school as a single parent as challenging, but it was a challenge she happily deemed "well worth it."

It is this ambition that weaves a common thread throughout her success. Croshal’s dedication to her work and community in Pueblo are evident through both her long, rewarding career and her motivation to give back.

What was your favorite part about Homecoming and Reunion Weekend?

I had a nice visit with several classmates of the CU Law Class of 1979. It was fun to compare notes with several women from my class, who I didn't know too well during law school but discovered we had a lot in common. Sadly, I missed all the activities at the law school, but we did go to the football game. [My husband] Jim and I have season football tickets. I always enjoy the game day atmosphere.

Where is the last place you traveled?

My very last trip was a four-day trip to Scottsdale, Arizona, for a CBA/ABA conference. My last personal trip was to Germany for an exchange student’s wedding. On this trip, I also spent time in Belgium and the Netherlands. The wedding was incredibly fun. I also saw the tulips in full bloom at Keukenhof Gardens—spectacular.

What is the biggest takeaway from your judgeship?

This is a hard question as you see so much and learn so much as a judge, and there are so many aspects to the job! My experience with the people who appeared in front of me is that what they really want is to be heard, to have their day in court, and to feel that you are listening to them and the case. The vast majority of people take court seriously and act with respect in the courtroom. In turn, they appreciate being shown respect.

What are you reading right now?

Signing Their Lives Away: The Fame and Misfortune of the Men Who Signed the Declaration of Independence by Denise Kiernan and Joseph D'Agnese.