Appointed by President Obama in 2010 to the nation’s highest court, Kagan spoke on a range of topics including her experience as a law student, diversity on the Supreme Court, the Court’s independence, and her relationships with colleagues on the bench.

"We are extremely grateful to Justice Kagan for sharing her humor, wisdom, and inspiration with the Colorado Law and greater community," Malveaux said.

Colorado Law alumni and friends tuned in from near and far, including at a watch party for Houston-area alumni hosted by Bill Buck ('83).

Reflecting on the legacy of Justice John Paul Stevens, Kagan’s predecessor on the bench and the event’s namesake, Kagan shared: "He is, and long has been, a hero of mine. He was a man of extraordinary brilliance, but even more of extraordinary wisdom, which is not the same thing."

Of her experience as a law student, Kagan said she enjoyed the analytical rigor that law school demanded, coupled with the feeling that the law was a way to make a difference in the world: "It was very obvious to me in my law school classes how it was that the law was about the betterment of our society and the advancement of human welfare."

Her advice to law students: Use law school as an opportunity to try to find what really moves you and the kinds of things you really care about.

And don’t be so worried about planning. “Most of the best things that happen in people’s legal careers are luck and serendipity," she said. "The best legal careers are guided by a sense of, 'Is this more fun than what I’m doing now? I guess I’ll go do that now.'"

Even with all of her successes, Kagan said she has experienced disappointments along the way as well. "For every job I got, there were two I didn't get," she said, reflecting on her nomination by President Clinton to the U.S. Court of Appeals for the District of Columbia in 1999, which never materialized.

"You can’t let disappointments get you down too much," she said. "It may be the best thing that ever happened to you that you didn’t get a job."

"You can have very good friendships with people you disagree with," Kagan shared. She quoted the late Justice Antonin Scalia: "If you take this personally, you’re in the wrong business."

However, she recalled a time when having diversity on the bench really made a difference. In 2009, the Court heard a case dealing with a 13-year-old girl who was strip-searched at a junior high school because she was thought to have marijuana. At the time, Justice Ruth Bader Ginsburg was the only woman on the Court.

"You could see Justice Ginsburg, in the questions that she asked, you could see that she had a picture in her head of what this was like and what it would feel like if you were that 13-year-old girl," Kagan said. "But [Ginsburg] was the really the only one."

The male justices on the Court were criticized for failing to fully appreciate what the student had endured.

In the end, Justice Ginsburg’s view that the search violated the Constitution prevailed. "She was able to convince people that this was a serious matter," Kagan said. 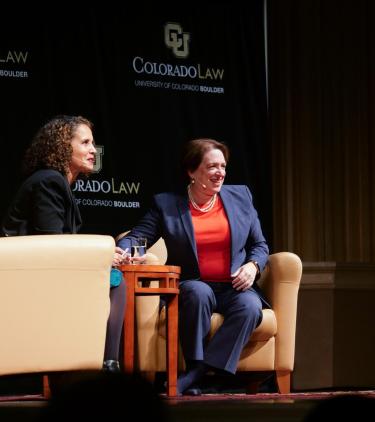 Kagan also addressed split opinions on the Court, how the Court maintains its independence in today’s partisan climate, and how it handles controversial issues. She described differences in opinion on hot-button issues not as partisanship, but as a matter of "different ways of looking at the Constitution."

She advised the Court to "think hard when it’s doing its work about trying as hard as it can not to look politicized and polarized and deeply divided. We live in this polarized time, and the last thing that the Court should do is to look as polarized as every other institution in America."

Malveaux asked Kagan about how she goes about determining when it is more important to dissent than to build consensus. As an example, Malveaux referenced Rucho v. Common Cause, a recent landmark redistricting case focused on whether federal courts could resolve partisan gerrymandering disputes. In a contentious 5-4 decision written by Chief Justice Roberts, the majority concluded that it was not for courts to decide. Here, Kagan wrote a strong dissent, concluding: “Of all times to abandon the Court’s duty to declare the law, this was not the one. . . .  With respect, but deep sadness, I dissent.”

On this particular case, there just wasn’t a lot of room for compromise, Kagan said. "Some issues are like that. Others are definitely not," she said, stressing the importance of reaching across perceived divisions and finding common ground when possible: "I like to think that it’s something I do quite a lot. But sometimes you can’t."

"I think I wrote a strong dissent . . . that I hope was not so much angry as deeply saddened, because if the Court is not going to protect the basic structures of our democracy, then it’s hard to know what the Court’s role is. I think the majority failed to do that, and I said so," she said.

Kagan concluded by reflecting on questions submitted by Colorado Law students Leah Fugere ('20), José Ramón García Madrid ('22), Peter Selimos ('22), Conor May ('21), Chelsea Lauwereins ('20), and Javon Quarles ('21) on topics including perceived subtext in judicial opinions, the impact of technology and social media on the Court’s operation, and Kagan’s experience clerking for Justice Thurgood Marshall, whom she described as "the greatest lawyer of the 20th century."

During her visit to Boulder, Kagan also visited Associate Professor Sharon Jacobs’ Legislation and Regulation class, where she participated in a lesson on statutory interpretation and answered questions from students.

"We are deeply grateful to Colorado Supreme Court Justice Melissa Hart for her leadership as the former director of the White Center and for her facilitating Justice Kagan’s visit,” Malveaux said. "Justice Hart’s signature program continues to inspire and educate our community at large."

The lecture will be broadcast on C-SPAN and is also available on YouTube. 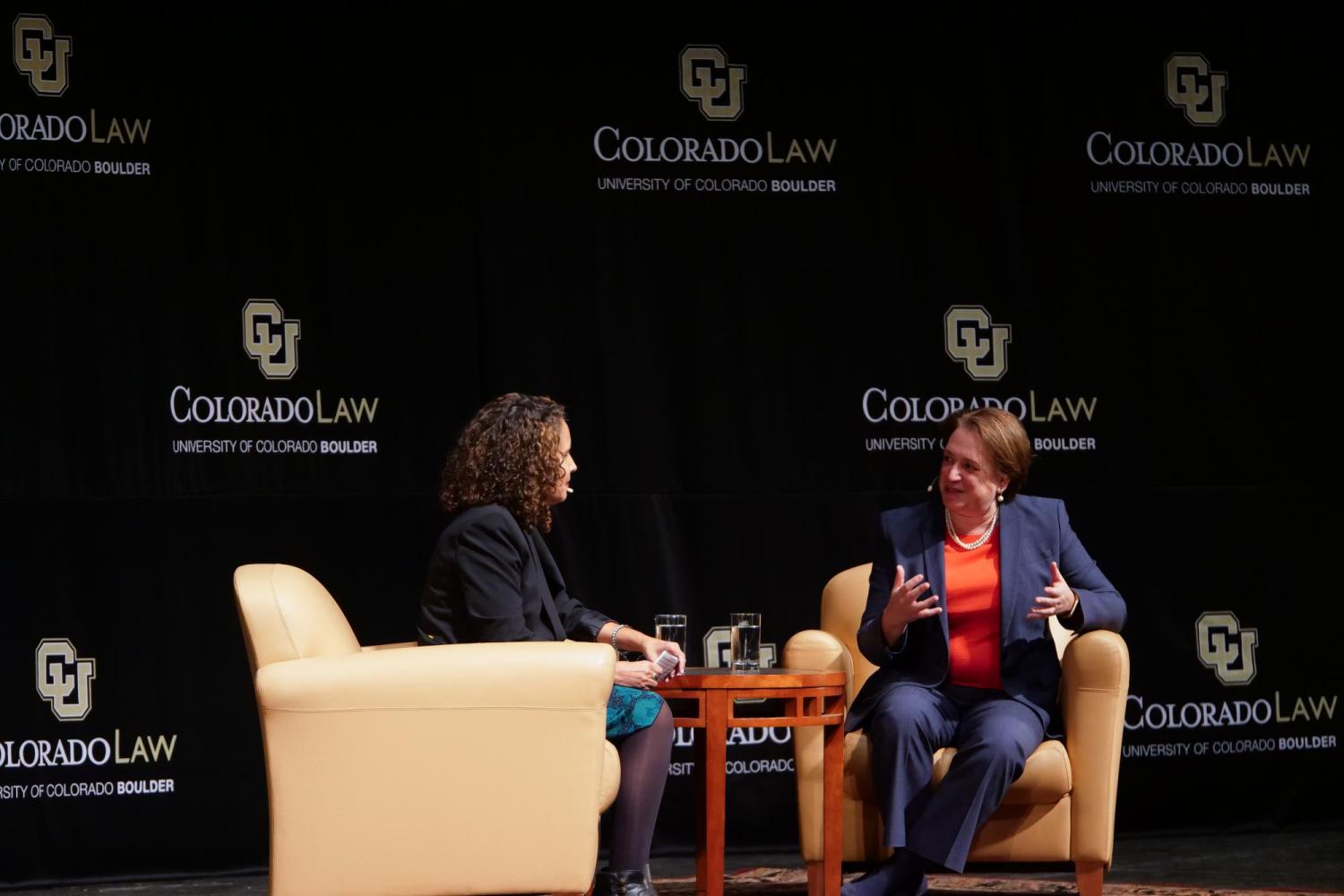 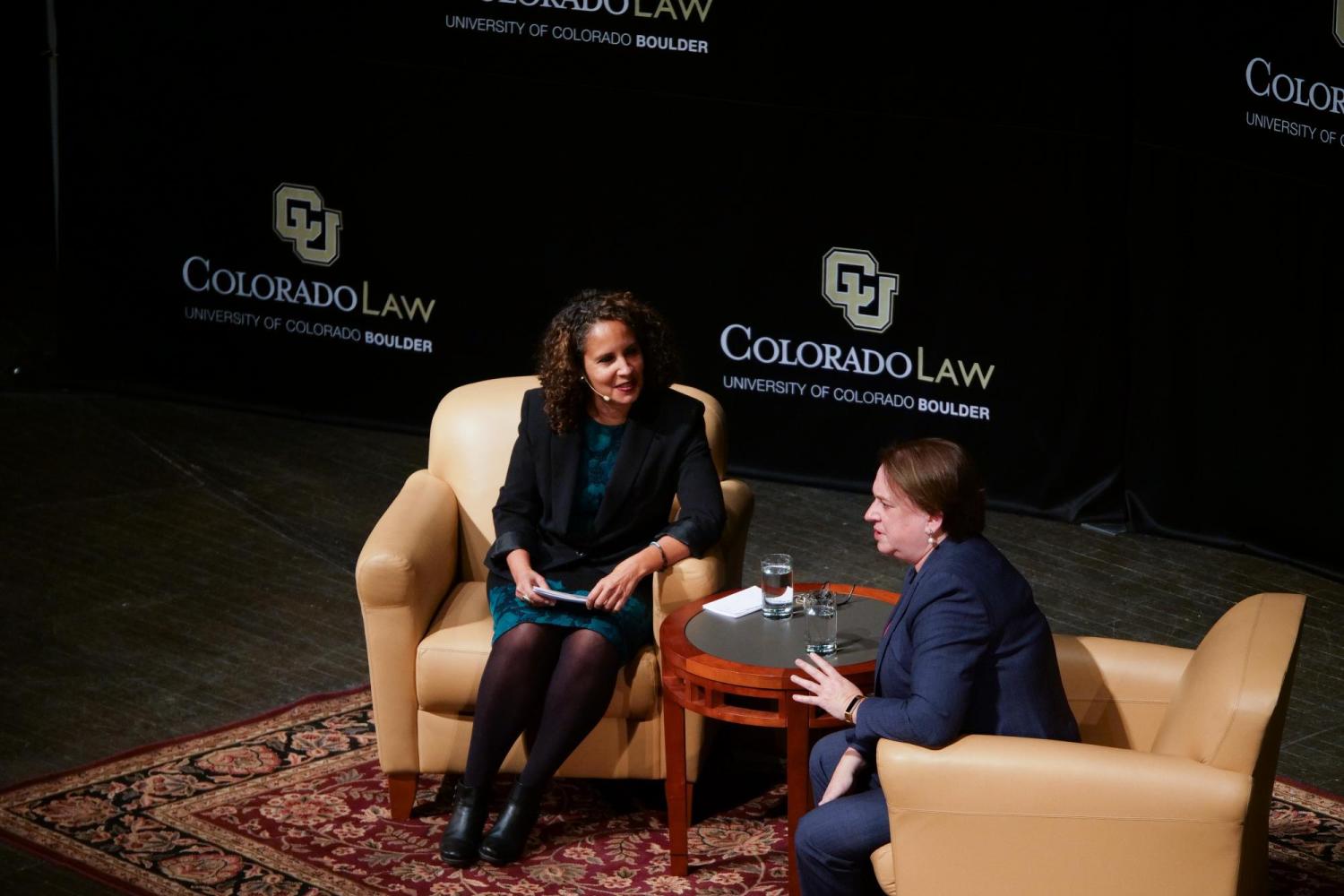 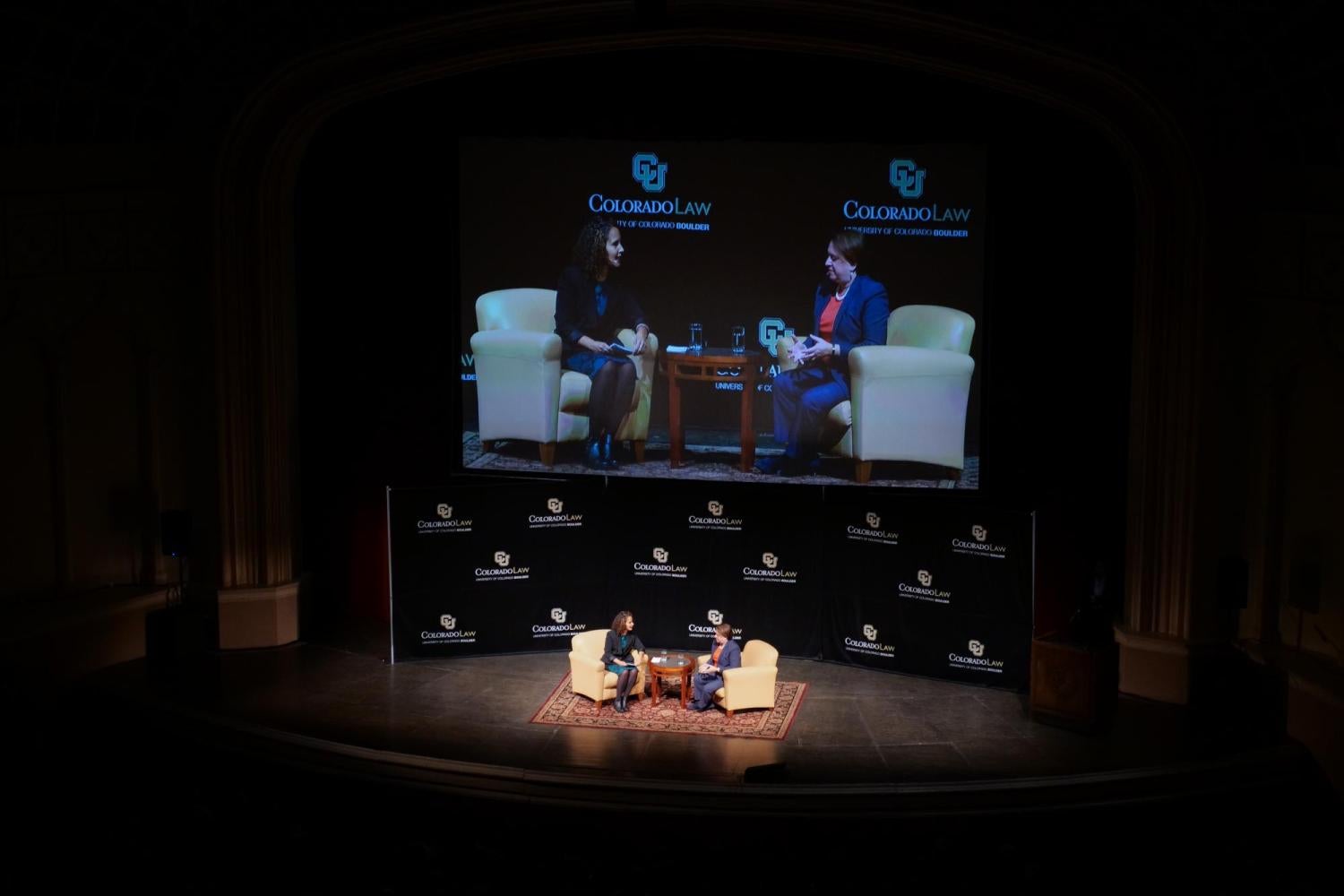 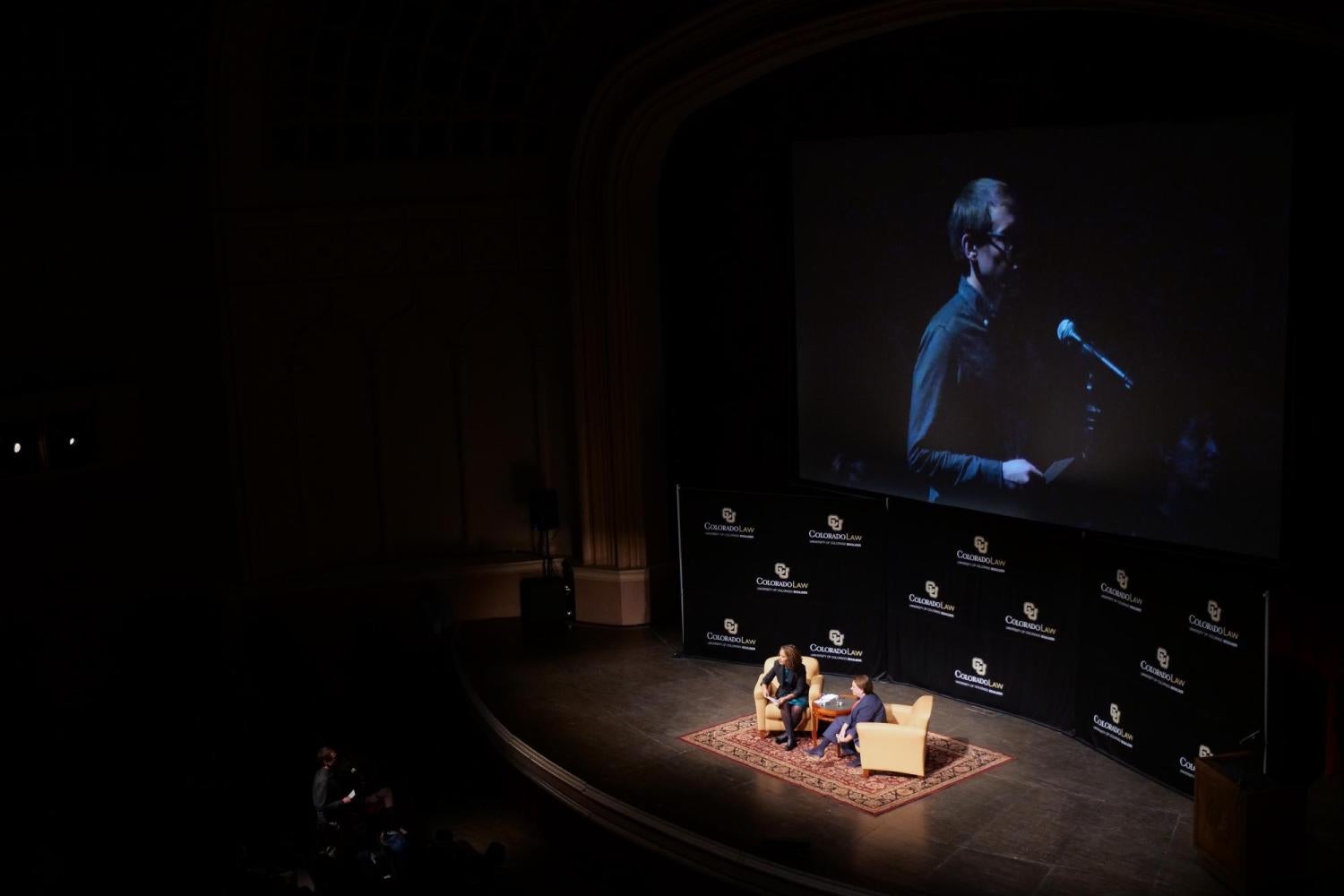 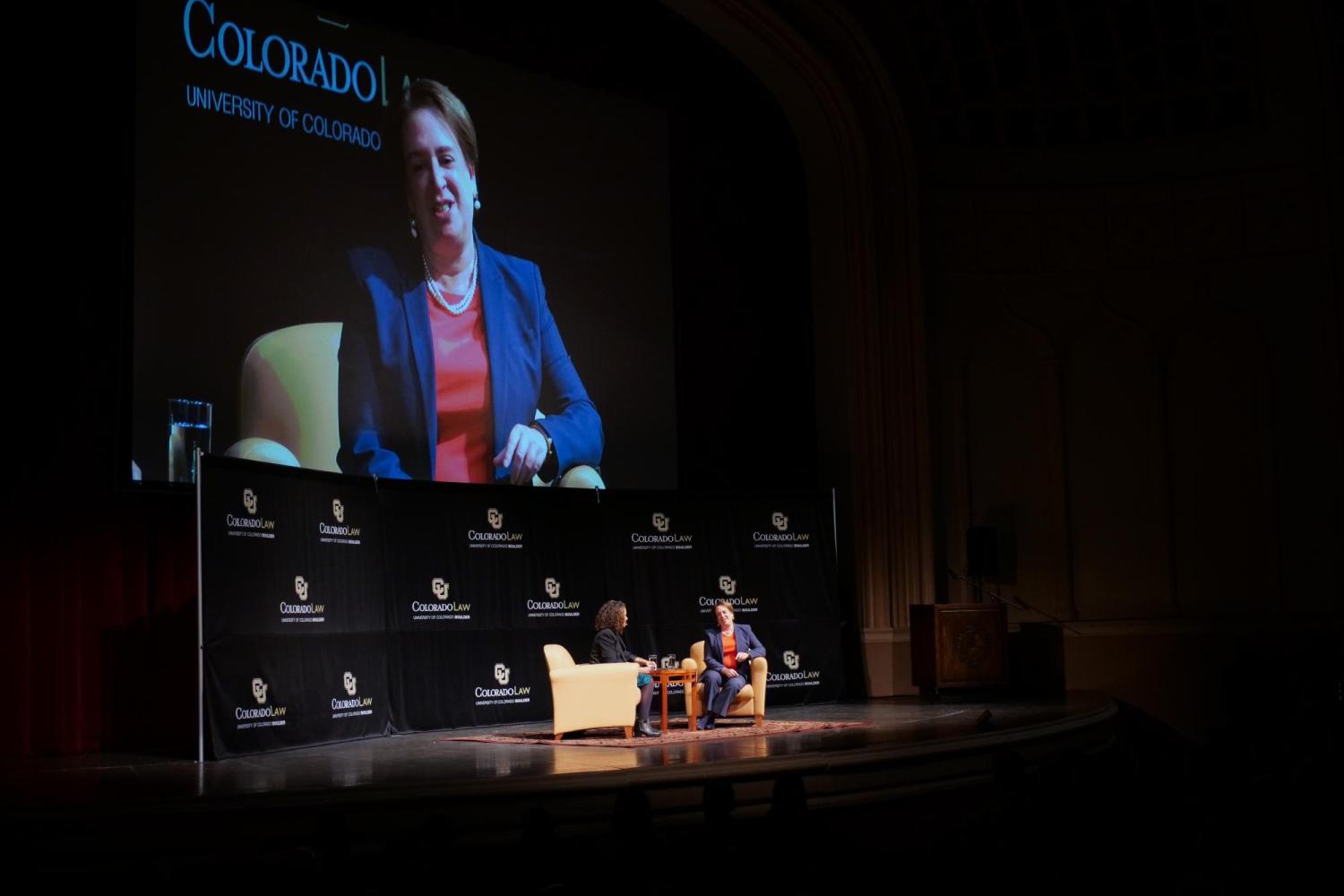 More than 2,000 people attended the lecture at CU Boulder's Macky Auditorium, with hundreds more across the U.S. and internationally watching via livestream.