Hitting the Trails To Hit the Books Harder

Katie Frayler ('16) might be a young lawyer, but she’s reaching some great heights—and not just in her career. Her hobbies include activities like high-lining (basically, high-altitude outdoor tightrope walking) that would petrify people with the slightest acrophobia.

Keeping up with both work and play is no easy feat when you travel as Frayler does.

“I go all over,” she explained. “I have lots of out-of-state clients: North and South Dakota, Utah, New Mexico, Arizona, Oklahoma.”

Frayler practices Indian law as an associate at Fredericks, Peebles & Patterson LLP in Louisville, Colorado. But she was able to hone some of her work-life balance skills in law school, thanks to the Stigler-Nelson Alpine Endeavors scholarship, which she received for her outdoor activities.

"Anywhere you can save money on post-grad debt is always appreciated, and I really liked that Colorado Law offered a scholarship like that. It motivated me to work really hard in school, but also to get outside and have fun.”

She’s not the first to navigate the space between book time and outdoor time at Colorado Law.

When Shawn Stigler and Alex Nelson earned their JDs in 2003, they felt lucky. It was a tough time in the economy, including for lawyers.

Yet, they both managed to land good jobs quickly after their time at Colorado Law. That’s a feat they credited, in part, to a work-life balance supported by the nearby Rocky Mountains. 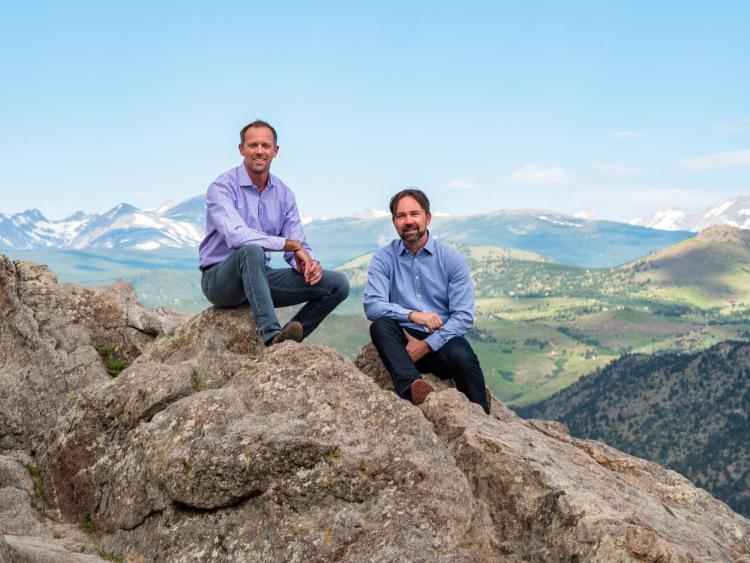 The pair formed tight bonds with classmates skiing and mountain biking off mountain passes like Loveland Pass and Rollins Pass. It’s not that they weren’t hitting the books. But they found spending a little time zipping down the slopes had a big positive effect on their study habits.

"The more I got outside, the better I did in school," Stigler said.

Nelson and Stigler decided to give that same opportunity to someone else by helping defray the cost of law school while nudging the student to take a breath outside of class. They set up the scholarship fund now known as Alpine Endeavors. 2Ls write an essay for a chance at the $2,000 scholarship, and a committee chooses the winner. So far, 15 students have received the scholarship, including Frayler.

While Nelson and Stigler have tapered off some of their more extreme outdoor adventures, they always enjoy looking back at the students they’ve helped, as well as their awardees’ pursuits in nature. The two now have more than a dozen thank-you notes and photos of recipients, often posed outside, saved in scrapbooks. They hope to compile decades’ worth of students’ stories by the time they’re done.

The scholarship amount may not cover the whole cost of tuition, but Nelson and Stigler believe it makes a difference.

“You can give an amount that’s significant to a student without seriously impacting your bottom line,” Nelson said. “Even a few hundred dollars between you and your friends can add up for a student who doesn’t know yet what their future looks like.”

The pair hopes the extra boost helps students pursue their passion for the law, without feeling pressured to recoup the full cost of law school. Frayler said that’s true for her.

“Working in Indian Country, a lot of times you’re working for underserved and low-income communities and populations,” she said. “So it’s helpful to have less debt. If I had more debt, I might need to work at a higher paying job in the private sector. Now I’m very happy with my job and my clients, and I love the work that I get to do.”

After being introduced to Indian law through Indian law classes and the American Indian Law Clinic, Frayler said this practice was a natural path for her. In her opinion, it is one of the most interesting careers an attorney could pursue.

“It’s like this little microcosm of federal law, and then each tribe has its own tribal laws as well,” she said. “So my days are varied and interesting all the time.”

And she still gets plenty of time outdoors. “I ski in the winter, I rock climb in the summer, I hike with my dog, I even ski with my dog sometimes,” Frayler said. Her advice to young lawyers: “Don’t let your work consume you. Get outside as much as you can.”

To learn more about scholarships at Colorado Law, please contact Peter Sanders, Assistant Dean for Advancement, at peter.sanders@colorado.edu or (303) 492-0752.

This story originally appeared in the fall 2019 issue of Amicus.
Categories:
Return to the top of the page