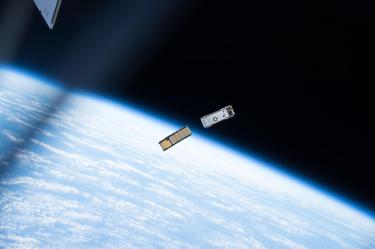 On rural tribal lands, where approximately 85 percent of residents lack fixed broadband services, residents often have to travel more than 30 miles to reach the nearest internet access point. Lack of access to information technology has deep societal impacts, with high poverty and unemployment rates directly linked to lack of basic infrastructure and access to technology. Small satellites, commonly known as CubeSats, have the potential to bridge this information gap between remote communities and more populated areas by providing wide-reaching internet access, advanced Earth-sensing satellite systems, and other public interest applications.

University researchers and their students may be in a great position to use small satellites to serve the public interest, but the licensing processes overseen by the Federal Communications Commission (FCC) and other agencies can be complex and expensive. A new project led by Associate Clinical Professor Blake E. Reid, student attorneys in Colorado Law’s Samuelson-Glushko Technology Policy and Law Clinic, and Professor Scott Palo in CU Boulder’s College of Engineering and Applied Science along with a coalition of small satellite researchers from the University of Florida, the Georgia Institute of Technology, the Massachusetts Institute of Technology, the University of Michigan, and others, advocates that the government simplify the licensing process of small-scale satellites to expand use by university researchers.

“In a nutshell, the issue that Professor Reid and Professor Palo and their student colleagues addressed was created by the fact that law and public policy have not kept up with the rapid technological and marketplace developments in the small satellite arena,” explained Dale Hatfield, executive fellow at the Silicon Flatirons Center for Law, Technology, and Entrepreneurship and adjunct professor in CU Boulder’s Interdisciplinary Telecommunications Program. “In particular, the FCC rules and fees governing satellite launches were largely developed for traditional satellite systems and, without modification, threatened both civil and commercial development of small satellite systems because of the costs and associated regulatory uncertainties and delays.”

For more than three decades, university researchers have relied on small satellite missions, partially because the cost is significantly less than traditional satellite systems.

In April 2018, the FCC recognized the need for streamlining its existing rules and sought comments from the public on how to best do so, Reid explained.

In collaboration with Palo and a coalition of other researchers, the TLPC this summer filed comments before the FCC on a variety of issues in the Commission’s proposed new streamlined process for small satellites.

“By acknowledging the fundamental differences between traditional and small satellites systems and taking the important step of proposing rules tailored to the needs of educational and scientific small satellite system operators, the Commission is fostering critically important innovation and research, stimulating the economic development of the small satellite industry and help maintain the  U.S.’s leadership in technological innovation,” the coalition wrote in a comment.

The comment continued: “In addition to advancing space systems technologies and contributing to space-based research, CubeSat programs, in particular, have allowed dozens of U.S. universities to produce graduates with invaluable experiences in space systems development, integration and testing and space mission operations. These experienced graduates have already contributed significantly to the U.S. space and defense workforce.”

“The current licensing system for satellites poses a high barrier to university researchers, which is a community the TLPC aims to support in a variety of contexts, ranging from improving spectrum policy to ensuring that computer scientists are not unfairly targeted under hacking laws,” Reid said. “Helping clear the way for researchers to more easily secure spectrum licenses will ensure that important public interest projects can get off the ground.”

In addition to providing vital communications services to indigenous peoples living in remote and other hard-to-serve areas, small satellite systems also provide advanced Earth-sensing satellite systems that can remotely gather information about the present state of the Earth and any changes in the planet’s environment. As such, they can, through remote sensing, detect and help mitigate illegal encroachment on the lands and other resources of native people.

“I am exceedingly proud of the important work of Clinical Professor Blake Reid, in collaboration with Professor Scott Palo, on the licensing of small satellites, and of the Technology Law and Policy Clinic, which, directed by Professor Reid, is unique among law clinics in the United States,” said Dean S. James Anaya. “This significant collaborative endeavor is helping to enhance communications services for those in remote areas and advance educational and scientific small satellite development for academic researchers across the country.”

Pictured: A pair of CubeSats with the Earth’s limb in the background.