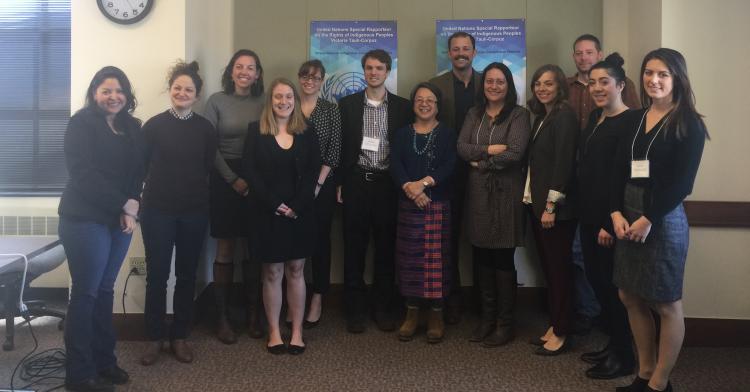 During a recent visit to the University of Colorado Law School, the United Nations Special Rapporteur on the Rights of Indigenous Peoples held the office’s first virtual consultation with indigenous peoples.

Victoria Tauli-Corpuz, whose role as special rapporteur involves gathering information on the situation of indigenous peoples worldwide, spoke via webinar with members of Native American tribes and representatives from indigenous rights organizations to learn about the state of indigenous peoples in the United States as it relates to energy development and natural resource extraction.

Typically, the special rapporteur holds regional meetings with tribal representatives throughout the year to study the situation of indigenous peoples. However, the remoteness of many indigenous communities restricts some tribal members from being able to attend these meetings. By hosting a virtual consultation, Tauli-Corpuz was able to generate greater participation by tribal members and increase the scope of information gathered.

Some participants detailed the negative effects of extractive projects on tribal lands, including health impacts, environmental concerns, and the destruction of cultural property. Others provided best practices acquired from their own successful tribally-driven energy projects. Tauli-Corpiz will present her findings and identify observations and recommendations in a report to the U.N. Human Rights Council in September.

During her time in Boulder, Tauli-Corpuz also met in person with leaders from the Southern Ute Tribe, the Ute Tribe, and Ute Mountain Ute Tribe to discuss energy development on their reservation lands. All three tribes have taken measures to advance tribal ownership of local energy projects—extractive and renewable—with the result of producing benefits for their members.

Technology will continue to create space for new avenues of increasing indigenous participation at the U.N., and plays a key role in increasing engagement of international indigenous communities, said Carla Fredericks, associate clinical professor and director of the American Indian Law Clinic.

“The American Indian Law Clinic’s goal in harnessing technology to engage in a fresh way with the international indigenous community grows out of Colorado Law’s commitment to both indigenous peoples and cutting-edge technological innovation,” she said. “Colorado Law is uniquely situated to maximize the possibilities of technology to help with the persistent challenge of increasing indigenous peoples’ participation at the United Nations. This work is not only useful with respect to our current work with the special rapporteur, but also a meaningful complement to the current work of Dean Anaya with the U.N. General Assembly to promote indigenous participation through U.N. mechanisms.”

Prior to Tauli-Corpuz, Colorado Law Dean James Anaya served as U.N. Special Rapporteur on the Rights of Indigenous Peoples from 2008-2014.