The Department of Cinema Studies and Moving Image Arts (formerly, Film Studies) at CU Boulder aspires to integrate the critical, historical and theoretical study of cinema, media and the visual arts, with artistic and commercial practices, for a deeper and more engaged understanding of the subject.

Graduates of the department develop an informed, analytical understanding of the medium’s aesthetics and impact on society and culture, while also acquiring career-relevant technical proficiency on various film, video and digital formats, post-production, screenwriting, and visual and media literacy.

Attending the University of Colorado Film Studies program has been one of the great blessings of my life. It is unlike any other film department. You actually learn every aspect of filmmaking from editing to shooting to directing to critical analysis and aesthetic knowledge. The professors gave me tools to combat the shallowness of the Hollywood industry with thoughtfulness, substance and soulfulness. I also met my closest friends and collaborators there. Fifteen years later, I am still working with them."

— Derek Cianfrance, film director and screenwriter (The Light Between Oceans, The Place Beyond the Pines, Blue Valentine)

Why Study at CU Boulder?

Films and film-making are more than just a hobby — they are a creative pursuit, and studying them offers the benefits of such. Creative majors are given the space and time to grow as both a creative and a critical thinker through the support of seasoned, talented professionals. Because of that, they are also able to develop the more abstract skills that jobs appreciate, like analytical thinking, time management, hard work, discipline and attention to detail or observation

The film and television industry is also a very real industry, supporting 2.1 million jobs paying $139 billion in wages annually, according to the most recent figures by the Motion Picture Association of America. Graduates of CU Boulder's Department of Cinema Studies and Moving Image Arts have realized those career opportunities in all aspects of the industry, in film festivals and media organizations, in print and online publications, museums, schools and other educational outlets, local and national media companies, journalism, advertising, law, and arts organizations across the nation.

At CU Boulder, the Department of Cinema Studies and Moving Arts is also considered one of the best in the nation, ranking in the top 25 film studies programs by the Hollywood Reporter, and the top cinematography program in the American West by MovieMaker Magazine.

The Department of Cinema Studies and Moving Image Arts offers two separate undergraduate majors that lead to the Bachelor of Arts (BA) in critical studies or production emphasis. A Bachelor of Fine Arts (BFA) in filmmaking is also available, via a competitive application, to a select cohort of students. The BFA requires more extensive work (developing both practice and aesthetics) and is targeted to highly talented students who aspire to professional careers in the film and TV industries, or to continue graduate studies towards an MFA in a different institution. All students enter the major under a BA plan, and may choose to complete the requirements for the BA in critical studies (history, theory, aesthetics, genres, principles of criticism) and/or a production emphasis (introductory and advanced courses on screenwriting, cinema production, editing, sound design, animation, digital media).

The Department of Cinema Studies and Moving Image Arts also hosts a wide variety of artistic, academic and extracurricular programs to enhance our students’ experience with a rounded arts-immersion experience. Being situated in the state-of-the-art Alliance for Technology, Learning & Society (ATLAS) building in the center of campus, the program has one of the largest collections of 16mm film prints anywhere in the country, exclusively for classroom use as well as a vast array of cameras, editing equipment, and optical printers. The Program also enjoys a dedicated teaching theatre with 35mm, 16mm, and HD projection, and a large private collection of rare, classical, historic and foreign films on Blu-ray and DVD formats for the exclusive classroom and research use of Film Studies.

In addition, Cinema Studies and Moving Image Arts is home to the International Film Series, the First Person Cinema Program, the Brakhage Center for Media Arts, and the annual Brakhage Symposium. All these activities and venues are free and open to Film Studies majors and minors as parts of an academic program that fosters a comprehensive immersion in cinema studies.

For the undergraduate students pursuing a degree from the Department of Cinema Studies and Moving Image Arts and interested in research or scholarly work, there are a number of opportunities beyond just class work:

Students graduating with the B.A. degree in cinema studies and moving image arts offer employers a well-rounded background including analytical and communication skills. Writing reviews, journalism, advertising, education, management, and public relations are just a few of the fields that may be of interest to film studies majors. Students completing the B.F.A. degree may additionally choose to seek experience as film editors, art directors, cinematographers, or as members of a film production team.

According to PayScale Human Capital:

According to figures from the U.S. Bureau of Labor Statistics: 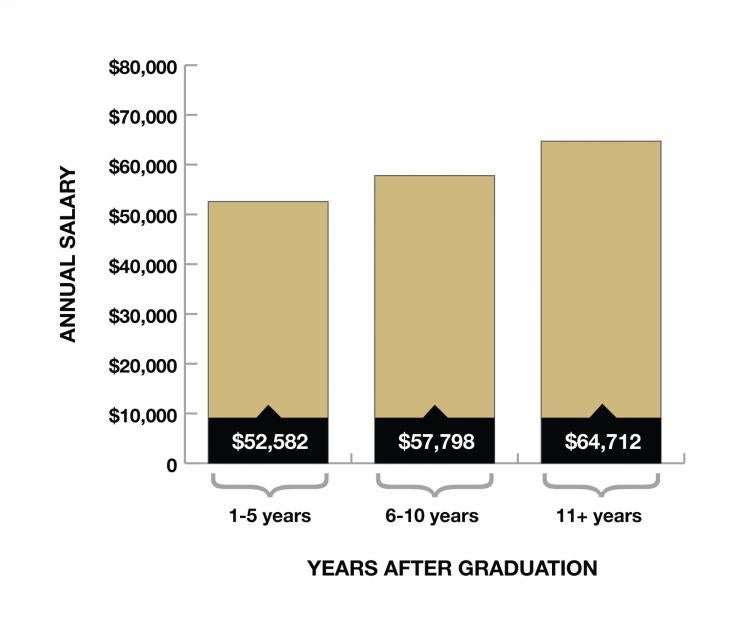 The estimated median salaries, as reported on Tableau, for Film Studies graduates for 1 to 5, 6 to 10, and over 11 years out from school.

At CU Boulder, Cinema Studies and Moving Image Arts graduates earn more than the nationwide average of comparable majors as reported by the U.S. Bureau of Labor Statistics. CU Boulder alumni in this discipline earn an estimated annual salary of $76,680 (both BA, left, and BFA, right), based on a pool of 987 alumni who graduated between 1989 and 2018. This amount, however, is lower than the average for all CU Boulder graduates with a bachelor's degree, according to a survey by Esmi Alumni Insight of 25,000 alumni who graduated during the same stretch.

Graduates from the Department of Cinema Studies and Moving Image Arts have gone onto successful film careers across the globe, with numerous accolades ranging from Academy Award nominations, to Emmy awards, to one grad being one of the youngest filmmakers ever to join the Director’s Guild of America. Some of the alumni of the department include: