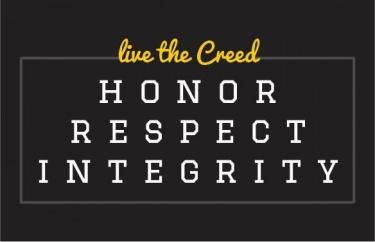 The Colorado Creed is a social responsibility code started by students, is run by students and is for all of the CU and Boulder community. It is a way of life and a reminder to act with honor, integrity and respect. The Creed is CU when we are at our best.

As a member of the Boulder community and the University of Colorado Boulder, I agree to:

I will strive to uphold these principles in all aspects of my collegiate experience and beyond.

By establishing and following the Colorado Creed, we all gain

History of The Creed

In the fall of 2003, a small group of students objected to a series of unscientific national rankings that painted the University of Colorado Boulder with a less-than-desirable brush.

They disagreed with the rankings because the data presented something far different from their own experiences at CU. The students were motivated to take action in the form of an ad campaign. The seeds of the Colorado Creed grew from the success of that campaign. The Creed is a social code of conduct, a lifestyle by which students, faculty and staff at CU Boulder live.

The Colorado Creed isn’t new in some respects. It was founded in spirit in 1876, and has thrived on the merits of generations of CU students and community members since then. It is based on upholding strong values, making the right decisions and being responsible for those decisions.

The Creed is not a mandate or a set of rules and obligations. It is a social responsibility code for people to live by. It is a reminder to act with honor, integrity and respect.

How you can support The Creed