Sociology is the scientific study of human social behavior. It considers how society influences individuals, and how individuals influence society. Sociologists describe and explain the actions of persons, groups, organizations, classes and entire societies.

My Sociology degree from CU Boulder has been invaluable in preparing me for success. Thanks to the advice and encouragement received from my CU professors, I received multiple highly competitive fellowships, enabling me to complete a double PhD at the University of California, Berkeley. The quality of education I received from CU Boulder was invaluable: I still refer to my notes from my undergraduate classes!"

Why Study Sociology at CU Boulder?

Did you know that Michelle Obama holds a BA in Sociology from Princeton University? She follows in the footsteps of a number of influential civil-rights leaders who also have sociology degrees, including Martin Luther King, Roy Wilkins, Jesse Jackson, Ralph Abernathy and Shirley Chisholm.

A major in Sociology prepares students to both live in a changing world and change the world they live in. Sociology is a social science focusing on human society, including structure, systems, culture, and interpersonal interactions. Sociology students will explore a large array of social topics and phenomenon using the sociological imagination. A background in Sociology greatly adds to a student’s understanding and acceptance of the world around them, as well as their own role in society.

The Department of Sociology at CU Boulder is also one of the best in the nation, ranking #42 in the nation by U.S. News & World Report.

In addition, the department has a number of excellent and award-winning faculty, including a CU Distinguished Professor, three Fulbright scholars, a Guggenheim fellow, numerous fellows for the American Academy of Arts and Sciences, Academy of Criminal Justice Sciences, American Council of Learned Societies, Andrew W. Mellon and numerous book and teaching awards.

The Department of Sociology is nationally recognized in several areas of research, focusing broadly in five categories: Environment, Hazards and Disasters, Gender and Sexuality, Criminology, Qualitative and Interpretive Sociology and Population Sociology.

Their diverse faculty also include several who have joint affiliations with institutes and centers like the Institute for Behavioral Genetics, Institute of Behavioral Science, Center for Values and Social Policy, CU Population Center and Natural Hazards Center, and other departments like Anthropology, Environmental Studies and Women and Gender Studies.

For the undergraduate students pursuing a degree in sociology, there are a number of research opportunities beyond just class work:

Sociology majors have the academic background suitable for many types of entry-level positions. A graduate with a degree in sociology may work in government as a researcher or data analyst; in business as a manager, writer or editor; in social services as a caseworker, group worker or restitution officer; in public health as an interviewer or demographer; in conflict resolution as a mediator; or in community relations as a neighborhood organizer.

Graduates may also wish to earn a master's or doctoral degree in order to teach at the university level, design and supervise research projects, or act as a private consultant to government agencies, industries, families and organizations engaged in research, community service or social change. 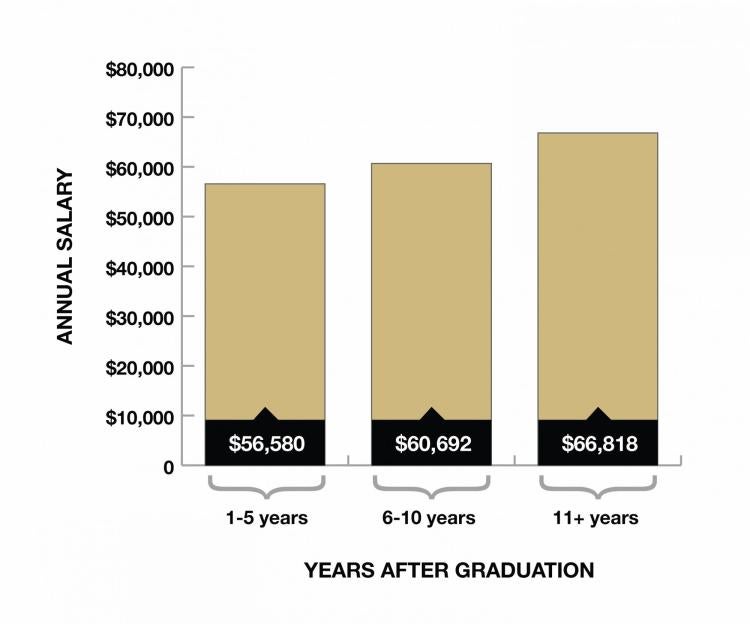 The estimated median salaries, as reported on Tableau, for Sociology graduates for 1 to 5, 6 to 10, and over 11 years out from school.

At CU Boulder, Sociology graduates earn less than the nationwide average of comparable majors as reported by PayScale. CU Boulder alumni in this discipline earn an estimated annual salary of $67,429, based on a pool of 537 alumni who graduated between 2011 and 2018. This amount is also lower than the average for all CU Boulder graduates with a bachelor's degree, according to a survey by Esmi Alumni Insight of 25,000 alumni who graduated during the same stretch.

The U.S. Bureau of Labor Statistics projects that 2016-2026 job growth for sociologists with a master’s degree will be flat, slower than the 7 percent average for all jobs.

The Department of Sociology has an extensive alumni network working in a variety of industries across the globe. Some alumni of the program include: