Philosophy poses questions that go to the bottom of things. It asks after foundations and hunts down ultimate assumptions. It often challenges what everyone accepts and asks for proof when no one is in doubt.

A core component of a liberal arts education, philosophy trains students to think rigorously about the deepest and most difficult questions we can ask about the world and our place in it. Philosophy courses develop analytic logical reasoning and writing skills and thereby prepare students for the modern workforce, which increasingly values creativity, critical thinking and career versatility.

Although quantitative skills are important in business, it is the ability to effectively communicate that propels one to the highest levels of business success. And philosophy’s literate rigor provides an exceptional skill foundation for such a profession."

Why Study Philosophy at CU Boulder?

Philosophy provides an essential component in any sound general education in two ways: by means of the understanding it provides of various philosophical matters and by means of the general intellectual skills in logic, the use of language, and the assessment of evidence it inculcates.

Not only does philosophy provide an understanding of a wide range of matters, but the matters dealt with are important and exciting. Consider this: Is human reason fallible? Does morality rest on arbitrary foundations? Is there such a being as God?

Many subject areas besides philosophy inculcate various general intellectual skills. But philosophy, unlike most such areas, deals professionally with logic, the use of language, and the assessment of evidence. As a result, philosophy is an especially valuable training ground for the intellect. Such training is provided in almost all courses in philosophy, but especially in courses in logic or critical thinking, the philosophy of language and epistemology (or the theory of knowledge). Such courses are invaluable to the person who must live by thinking—the scientist, scholar, lawyer, journalist, business manager, etc.

Philosophy is also a valuable background for many other disciplines. Courses in logic, language, and epistemology have a universal relevance. So do courses in moral philosophy. Courses in moral and social philosophy are of special relevance to those doing work in literature, history, religion, or education. And then there are philosophy courses especially designed to deal with philosophical matters as they affect other areas, e.g., the philosophy of law, of science, of religion, of history, of education, and of the fine arts.

And did you know that philosophy majors score better than any other undergraduate major on the verbal reasoning and analytical writing sections of the GRE (Graduate Record Examination)?

In addition, CU Boulder’s Philosophy Department is ranked 12th among public research universities. Faculty members have published with prestigious presses like Oxford and Cambridge and won fellowships from the National Endowment for the Humanities, the National Science Foundation, the Rockefeller Foundation, NASA and the WEB Du Bois Institute at Harvard. One faculty member is a Professor of Distinction and has recently been elected to the American Academy of Sciences.

Their diverse faculty also include several who have joint affiliations with institutes and centers like the Center for Medieval and Early Modern Studies, the Institute for Cognitive Science, the Center for Values and Social Policy, the Center for the Study of Origins, the Center for Astrobiology, and other departments like Classics, Physics, Environmental Studies and women and Gender Studies.

For the undergraduate students pursuing a degree in philosophy, there are a number of research opportunities beyond just class work:

As a philosophy graduate, you will find you are adaptable to a variety of careers. The ability to work on abstract problems, to understand the interrelationships between various fields, and to clarify basic concepts enables you to assume entry-level positions in business, government, public service, mass communication, banking, personnel, advertising, and numerous other fields.

If you elect to continue your studies, you will find that a philosophy major is excellent preparation for law school. A degree in philosophy also helps prepare you for graduate work in philosophy or other humanities disciplines such as literature, classics, and theology. 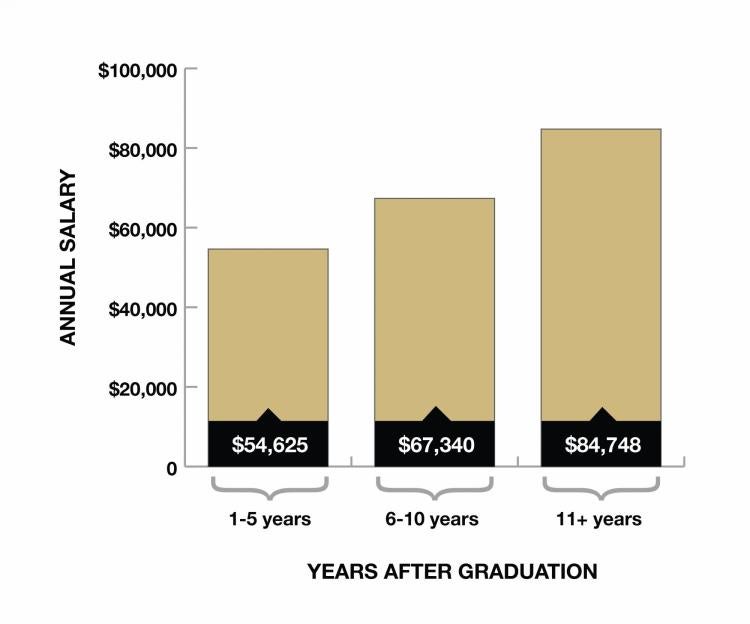 The estimated median salaries, as reported on Tableau, for Philosophy graduates for 1 to 5, 6 to 10, and over 11 years out from school.

At CU Boulder, Philosophy graduates earn roughly the same as the nationwide average of comparable majors as reported by PayScale. CU Boulder alumni in this discipline earn an estimated annual salary of $87,448, based on a pool of 502 alumni who graduated between 1989 and 2018. This amount, however, is slightly lower than the average for all CU Boulder graduates with a bachelor's degree, according to a survey by Esmi Alumni Insight of 25,000 alumni who graduated during the same stretch.

The philosophy department has an extensive list of alumni that are either working or have worked in a variety of industries across the globe. Some alumni of the program include: