The Department of Astrophysical and Planetary Sciences at CU Boulder has a reputation of excellence, consistently ranking among the top space programs in the country.

The department is one of the few programs that combines both astrophysics and planetary science, providing a unified view of the space sciences; the solar system and comparative planetology; extra-solar planets; stellar and galactic astronomy; cosmology; and high-energy astrophysics of black holes

My degree gave me the knowledge and confidence to engage with the general public at Sommers-Bausch Observatory, to engage with my peers by being a Learning Assistant, and to engage with career scientists as an intern at NASA's Jet Propulsion Laboratory."

Why Study Astronomy at CU Boulder?

Have you ever dreamed of being an astronaut? What about working with a world-renowned program to study the science of space? If either of these describe you, then CU Boulder's astronomy degree is a step in the right direction.

Did you know that:

A major in astronomy is designed to meet student needs for training in space sciences, including astronomy, astrophysics, planetary sciences and space physics. Undergraduates will be prepared both for academic research careers and for the industrial market (aerospace, computer software, instrumentation, and other technical areas), as well as for K-12 science education, science journalism and outreach and space policy. The astronomy degree has two tracks — General Astronomy (Astrophysical and Planetary Sciences degree only) and Astrophysics / Physics (supervised jointly by Astrophysical and Planetary Sciences and Physics).

The Department of Astrophysical and Planetary Sciences—which administers both tracks—is one of the few programs that combines both astrophysics and planetary science, providing a unified view of space sciences, the solar system, and comparative planetology, stellar and galactic astronomy and cosmology. You will be exposed to hands-on experience with telescopes, optics, instrumentation and computer image processing and modeling.

The Department of Astrophysical and Planetary Sciences at CU Boulder is also the best in the nation, consistently ranking #1 in terms of numbers of astronomy graduates by the American Institute of Physics. The Astrophysics graduate program is also ranked in the top ten programs nationwide by the National Research Council.

In addition, the department has a number of excellent and award-winning faculty, including a CU Distinguished Professor; three College of Arts and Sciences' Professors of Distinction; two Distinguished Researchers; NASA and National Science Foundation Early Career Award recipients; a Governor's Award for High-Impact Research in the category of Earth Systems and Space Sciences; and numerous NASA award winners and fellowships for organizations like Alfred P. Sloan, the American Association for the Advancement of Science (AAAS), the American Geophysical Union, Guggenheim, NASA, National Science Foundation, Hubble and the American Physical Society.

Their diverse faculty are affiliated with many different research labs, both within the university (Center for Astrophysics and Space Astronomy, Laboratory for Atmospheric and Space Physics, JILA), in the Boulder area (High Altitude Observatory/National Center for Atmospheric Research, National Oceanic and Atmospheric Administration, National Institute of Standards and Technology, Southwest Research Institute) and outside Colorado (NASA). These affiliations often lead to research opportunities for students in the major. You may also choose to work with Astrophysical and Planetary Sciences faculty on independent research projects that use the Sommers-Bausch Observatory, the 3.5m Apache Point Observatory, the Sloan Digital Sky Surveys (both Sloan-IV and soon Sloan-V) or the Fiske Planetarium.

For the undergraduate students pursuing a degree in astronomy, there are a number of research opportunities beyond just class work:

The General Astronomy track lends itself to a career in education, science journalism, science policy, information technology, science management or technical work that does not require a graduate degree. The Astrophysics/Physics track is intended for students who wish to do research and continue on to graduate work in astronomy or planetary sciences. This track also lends itself well to a career in technical work related to the field. 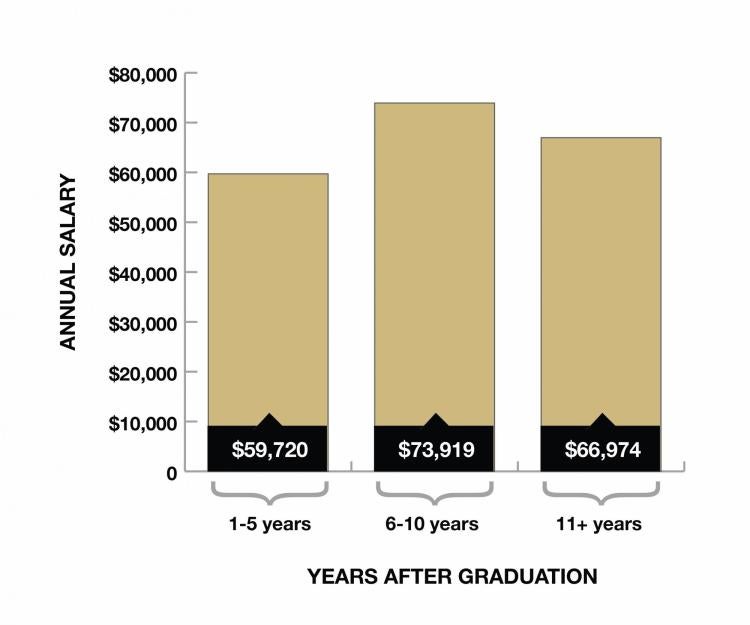 The estimated median salaries, as reported on Tableau, for Astrophysical & Planetary Sciences graduates for 1 to 5, 6 to 10, and over 11 years out from school.
Where CU Graduates Work

The astrophysical and planetary sciences department has an extensive list of alumni that are either working or have worked in a variety of industries across the globe. Some alumni of the program include: