The Department of Religious Studies at CU Boulder combines the intimacy of a classic liberal arts education and the rigor of a strong graduate program with a climate of engagement fostered by research-dedicated faculty who are interdisciplinary, international and experimental, and bring teaching to life with diverse experiences and unique perspectives.

The department’s research specializations range across the world and span from the ancient past to the contemporary moment. Beyond and across their areas of specialization, they are committed to making the study of religion accessible and relevant to public life.

As an undergraduate pursuing a major in Religious Studies, I developed a broad understanding of religious diversity. I learned that even individuals in the same groups can often have radically different ideas, breaking down my own misguided stereotypes and preconceptions of religious groups. Religious Studies helped me develop the ability to value and listen deeply to those who are different from me. This skill is invaluable in the work place—it helps me work productively with the diversity of individuals I interact with on a daily basis. My studies helped me become a better listener, a more compassionate thinker, and an open-minded individual."

Did you know that both former U.S. secretaries of state Madeleine Albright and John Kerry have both spoken about the importance of religion in international relations and the need for diplomats to have training in religious studies? Kerry even said that, “One of the most interesting challenges we face in global diplomacy today is the need to fully understand and engage the great impact that a wide range of religious traditions have on foreign affairs. I often say that if I headed back to college today, I would major in comparative religions rather than political science.”

At CU Boulder, the major in religious studies is designed to help you develop a sophisticated understanding of the forms and varieties of religion that have appeared in human culture. As part of that, the program does not provide the sort of specialized religious training associated with seminary education, but rather serves as an invitation to explore the world around you more deeply, promoting cultural literacy and engaging questions of value and meaning. The curriculum leading to the bachelor of arts (BA) degree is a rigorous academic program that draws from the humanities, arts and social sciences to provide a descriptive and analytical approach to religious traditions and phenomena.

Emphasis in the major is placed on the interrelations between religion and other aspects of human experience, such as politics, science, literature and the arts. Students also explore many forms of religious expression, including myth, symbol, ritual, theology, ethics, scriptures, dance, social institutions and religious doctrine.

And as a humanities major, there are a number of potential benefits:

Predictions about the future job market strongly suggest that liberal arts majors will be in demand.  According to billionaire investor Mark Cuban, "The nature of jobs is changing. … I personally think there's going to be a greater demand in 10 years for liberal arts majors than there were for programming majors and maybe even engineering, because when the data is all being spit out for you, options are being spit out for you, you need a different perspective in order to have a different view of the data. And so having someone who is more of a freer thinker [will be crucial]." Former Google exec Jonathan Rosenberg agreed with Cuban, adding, "We need more traditional liberal arts grads,” not just for their creative and critical thinking skills, but also because looking ahead to an increasingly automated economy, the jobs that require strong cognitive abilities and analytical thinking, are the least likely to be replaced by artificial intelligence."

As a recent Fortune article puts it, comparing unemployment rates, hiring data and salary distributions for humanities graduates vs. all bachelor’s degree holders shows that "critics are wrong about liberal arts degrees." In fact, "the median salary for those with a terminal bachelor’s degree in the humanities was $50,000 in 2013—a little lower than the median salary for all bachelor’s degree holders ($57,000), but still much higher than the median salary for those with just a high school diploma ($35,000). These findings echo those detailed in How Liberal Arts and Sciences Majors Fare in Employment: A Report on Earnings and Long-Term Career Paths (AAC&U and the National Center for Higher Education Management Systems, 2014). The report shows that humanities and social science graduates earn only slightly less than their peers with degrees in professional fields upon graduation from college, and by mid-career the earnings of humanities and social science graduates surpass those of graduates with professional degrees. Humanities majors are also more likely to go on to earn graduate degrees, a move which takes their median annual salary up to $71,000."

One tech startup cofounder and CEO says, "I'm still hiring more humanities majors than STEM grads, and I don’t see that changing anytime soon." Why? Because developers only make up 15-25% of tech companies' workforce; most of the jobs waiting to be filled require broader skill sets, such as critical thinking, understanding of other people’s perspectives and motivations, a "deeply contextual understanding of human behavior," creativity, adaptability and artistry.

Multiple recent studies have found that, among measures of workplace success in high-tech companies like Google, the "hard skills" acquired by majoring in a STEM discipline are less important than is often assumed. Instead, "soft skills" like "being a good coach; communicating and listening well; possessing insights into others (including others’ different values and points of view); having empathy toward and being supportive of one’s colleagues; being a good critical thinker and problem solver; and being able to make connections across complex ideas" are the seven top characteristics of success at Google (being a STEM major came in last on this list). And in another Google study, the company found that its best and most productive new ideas come not from teams composed of top scientists, but rather from teams who exhibit the skills of "equality, generosity, curiosity toward the ideas of your teammates, empathy, and emotional intelligence” – skills that humanities majors excel in. In response to this data, Google has enlarged its hiring practices to include humanities majors. Other tech companies are following suit. In fact, comparing hiring data for college graduates with STEM degrees vs. those with liberal arts degrees yields the surprising finding that "people without a tech degree may be benefitting the most from the tech boom."

In addition to a strong curriculum, the department also has a number of excellent and award-winning faculty, including a scholar called "pathbreaking" by the Frankfurter Allgemeine Zeitung, numerous teaching and book award recipients, and fellows for such prestigious organizations as the National Endowment for the Humanities, Fulbright, the Holocaust Education Foundation and the National Council of Eastern European and Eurasian Research.

Their diverse faculty also include several who have joint affiliations with institutes and centers like the Center of the American West and the Native American and Indigenous Studies Program, and other departments like History, Jewish Studies, Humanities, Ethnic Studies, Asian Languages and Civilizations, Women and Gender Studies and Media Studies.

For the undergraduate students pursuing a degree in religious studies, there are a number of research opportunities beyond just classwork:

My Religious Studies degree has been essential in providing me many of the skills, like critical thinking and writing succinctly, that have been most important in succeeding in law school. Even more importantly, however, my Religious Studies degree has helped me develop the capacity to better relate to others and understand societal complexities, which is vital to both professional and personal success."

As a religious studies major, you will acquire the critical thinking and communication skills valued by employers in diverse fields, from finance to law to medicine to the nonprofit sector. Additional possibilities include careers such as secondary school teaching, publishing, social service, journalism and as preparation for post-graduate professional and vocational degrees such as law.

At CU Boulder, Religious Studies graduates earn more than the nationwide average of comparable majors as reported by PayScale. CU Boulder alumni in this discipline earn an estimated annual salary of $73,762, based on a pool of 105 alumni who graduated between 2005 and 2018. This amount, however, is lower than the average for all CU Boulder graduates with a bachelor's degree, according to a survey by Esmi Alumni Insight of 25,000 alumni who graduated during the same stretch: 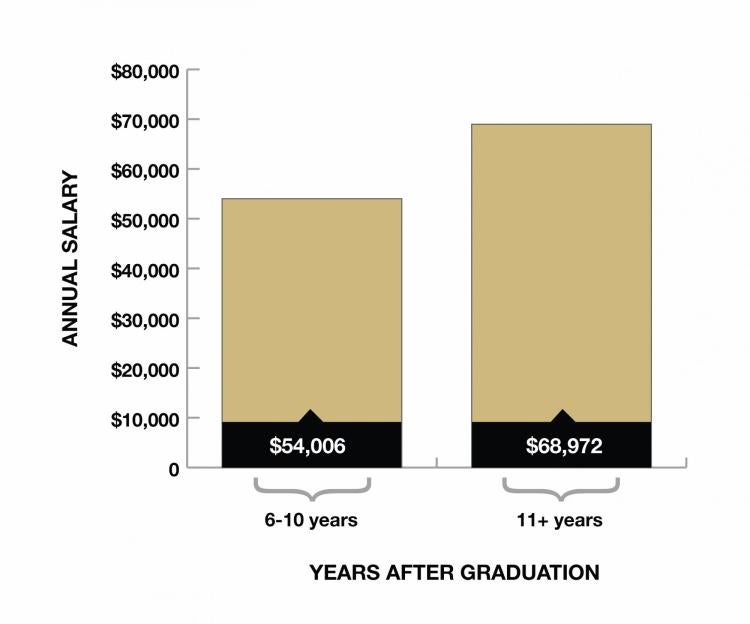 The estimated median salaries, as reported on Tableau, for Religious Studies graduates for 6 to 10, and over 11 years out from school.
Where CU Graduates Work

The most common question religious studies majors get from friends, family and strangers is “what are you going to do with a degree in religious studies?” The two most common misconceptions are that a Religious Studies degree is only for those who are pursuing vocations in the clergy or the academy, but in fact that is not the case! Though the department do have a few students who pursue these paths, the vast majority of their graduates find that their religious studies degree “travels” very well, and have gone on to a wide array of careers including law, medicine, public health, film and the arts, international relations, technology, journalism, ecology, education and the nonprofit sector. Past alumni include: