The Department of Physics at the University of Colorado Boulder offers award-winning programs, well-established and knowledgeable faculty and an unmatched educational experience.

The curriculum offered by the department provides knowledge of the physical concepts that are basic to the laws of nature, and the ability to use these fundamental concepts to answer questions and solve real problems. Students also gain an understanding of the relationship of physics to other fields such as astronomy, biology, engineering, chemistry and medicine.

My work with the professors was instrumental. My coursework taught me physics, but it was my professors who taught me how to be a physicist."

Why Study Physics at CU Boulder?

Are you interested in science? What about understanding how things work? At the heart of both those questions is the role of physics.

Physics is crucial to understanding everything from the smallest subatomic particles to the largest galaxies, and challenges how we view things as abstract as existence. And it has led the way on everything from curing cancer to developing clean energy technologies.

And at CU Boulder, the Department of Physics is ranked as one of the best in the world, ranking #9 in the United States and #13 in the world, according to the most recent rankings from the Academic Ranking of World Universities. The graduate program, in particular, ranks #14 in the nation, according to the most recent U.S. News and World Reports rankings. Additionally, the atomic, molecular and optical graduate specialization is ranked #2, and the quantum graduate specialization is ranked #6, by the same metrics.

For interested undergraduates, the department offers three different plans of study depending on interests:

In addition, the department has a number of excellent and award-winning faculty, and is home to multiple Nobel laureates, College of Arts and Sciences' Professors of Distinction, University of Colorado Distinguished Professors, MacArthur "Genius Grant" receipients, Presidential Early Career Award winners and Fellows for Packard, American Physical Society, the Optical Society of America, Alfred P. Sloan, the American Association for the Advacement of Science, Guggenheim and the American Academy of Arts and Sciences.

For the undergraduate students pursuing a degree in physics, there are a number of research opportunities beyond just class work:

Physics provides an excellent background for a wide variety of careers. Design and development work in industrial firms, government laboratories, and nonprofit research centers present opportunities to apply theory to specific problems. In such settings, physics graduates often work closely with those who have engineering backgrounds, complementing their more specific training with the physicist’s broader concepts. Other opportunities exist in industrial research and development including computational applications. Graduates can also go on to careers in business, law, or medicine, after appropriate graduate work.

The average expected salary for someone with a bachelor's degree in physics, according to the 2019-20 College Salary Report by PayScale Human Capital, is $84,000 per year. 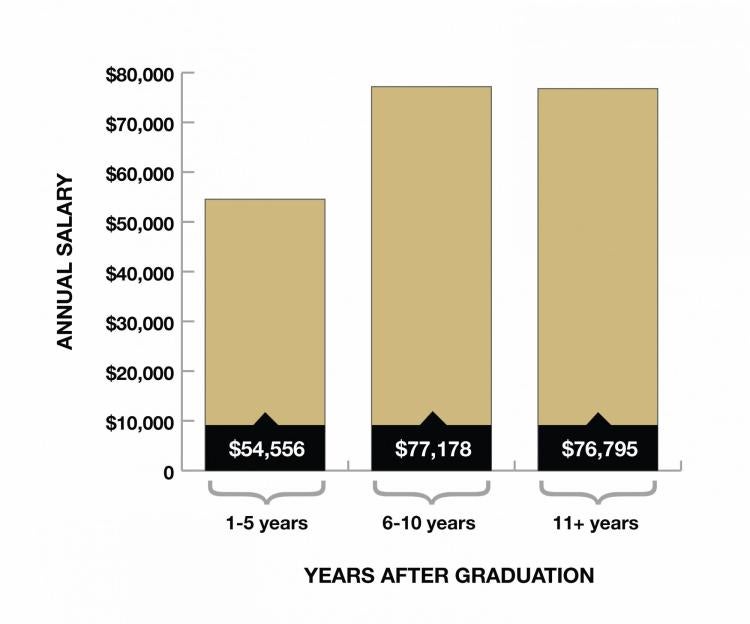 The estimated median salaries, as reported on Tableau, for Physics graduates for 1 to 5, 6 to 10, and over 11 years out from school.

At CU Boulder, Physics graduates about the same amount as the nationwide average of comparable majors as reported by the U.S. Bureau of Labor Statistics and Payscale. CU Boulder alumni in this discipline earn an estimated annual salary of $89,102, based on a pool of 296 alumni who graduated between 1989 and 2018. This amount, however, is roughly the same as the average for all CU Boulder graduates with a bachelor's degree, according to a survey by Esmi Alumni Insight of 25,000 alumni who graduated during the same stretch.

The physics department has an extensive list of alumni that are either working or have worked in a variety of industries across the globe. Some alumni of the program include: