Language capability is unique to humans and the study of language is the study of a shared human heritage. Linguistics is the scientific study of human language—its structure and diversity, how its learned and understood, and how social practices shape and are shaped by it.

At CU Boulder, the Department of Linguistics is a major center of interdisciplinary research in linguistic cognition, computational linguistics, language documentation and  sociocultural linguistics. It offers a range of research programs targeting properties of language as it is used in daily life.  Many of its research efforts have critical applications, like the building of computer systems that process natural language and the revitalization and preservation of endangered languages.

My background in linguistics helps me everyday while crafting content and marketing strategies to engage various audiences. Linguistics has given me a solid background in understanding people, their perceptions and how language shapes everything."

Why Study Linguistics at CU Boulder?

Every time we utter a word, no matter how mundane, we engage in a remarkable and, to the best of our knowledge, uniquely human behavior.

Currently, there are over 7,000 languages in the world. Most of them have never been properly described and many of them will disappear from the earth in the next fifty years. Linguistics is the study of all aspects of human language, and one of its goals is to describe langauges and try to help them survive, if their speakers wish.

Linguists study language as a complex cultural adaptation, whose structural properties reflect the values, concepts and neural and cognitive machinery of language users. Language allows us to communicate our thoughts, get our daily needs met and signal aspects of personal identity. People have an immense amount of unconscious knowledge about language; this makes it possible to put thoughts into words and to understand what other people are saying to us, and to do it so rapidly that we rarely pay any attention to these remarkable processes—until we encounter other languages, young children just learning to talk or people with language disorders.

Linguistics tries to figure out what it is that we know and do when we are skilled language users. Linguists observe and describe the structure of languages (their grammar), the way children learn language, slips of the tongue and language disorders.

Linguists study the social nature of language by observing and describing face-to-face and telephone conversations, storytelling, doctor-patient interviews and other ways that language is used for cultural interaction. They also study the acoustics of sound waves and the way people’s brains react when they read or when they hear speech, and use this knowledge about how people process speech to help build better computer programs for automatic speech recognition. They create alphabets and dictionaries for languages that have never been written down before, and figure out the unconscious grammar that their speakers are using so that textbooks can be created. Linguists reconstruct prehistoric languages that have been dead for many hundreds of years, and try to deduce the principles behind their evolution into the thousands of languages of the world today. Languages whose grammars are studied by faculty members and current or recent students in the linguistics department include: Arabic, Basque, Bahasa Malaysia, Cantonese, English, Japanese, Mandarin, Polish, Spanish, Vietnamese, Yiddish; Native American languages: Gros Ventre, Lakhota, Blackfoot, Arapaho, Wichita; and African languages: Awutu, East Dangla, Gidar, Hona, Lele, Wandala, Mina, Mupun, Pero, Hdi, Giziga, Makari, Sakun.

And the Department of Linguistics is home to a number of excellent and award-winning faculty, including a College of Arts and Sciences' Professor of Distinction, a recipient of the Boulder Faculty Assembly’s Excellence in Teaching award, a recipient of the Humboldt Research Prize, and fellows of the American Council of Learned Societies, the Center for Linguistic Typology and the Association for Computational Linguistics.

Their diverse faculty also include several who have joint affiliations with institutes and centers like the Institute of Cognitive Science, and other departments like French and Italian, Spanish and Portuguese, Anthropology, Media Studies, Women & Gender Studies, Computer Science and Philosophy.

For the undergraduate students pursuing a degree in linguistics, there are a number of research opportunities beyond just class work:

Linguistics is an especially useful background for a number of jobs, including foreign service, international business, translation (including Bible translation) or interpretation, teaching English as a second language in the U.S. or abroad, bilingual education and advertising and publishing. As well, linguistics training is directly helpful in editing textbooks and documenting software.

Students who augment their linguistics degree with some computer science classes often find jobs in companies or labs that specialize in computer speech recognition or speech synthesis, or that build natural language interfaces for databases so that users can communicate with their computers more easily. 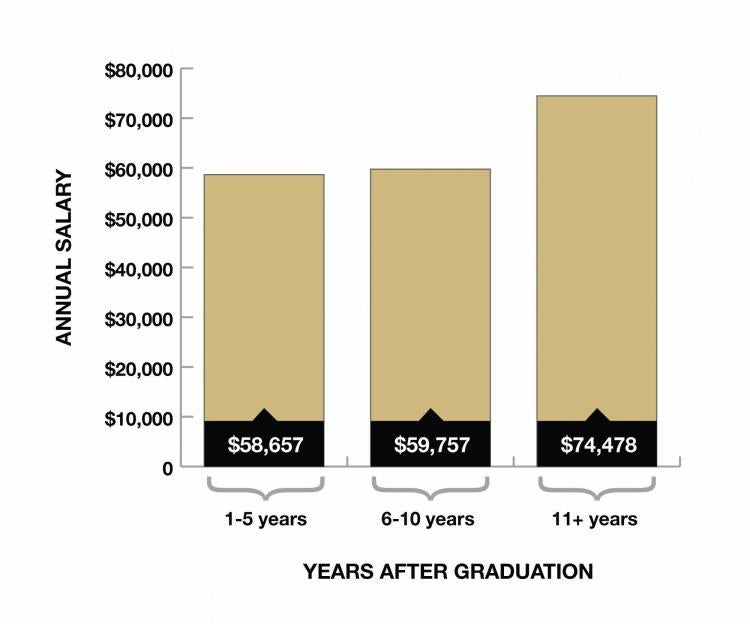 The estimated median salaries, as reported on Tableau, for Linguistics graduates for 1 to 5, 6 to 10, and over 11 years out from school.

At CU Boulder, Linguistics graduates earn more than the nationwide average of comparable majors as reported by PayScale Human Capital. CU Boulder alumni in this discipline earn an estimated annual salary of $73,178 based on a pool of 150 alumni who graduated between 1989 and 2018. This amount, however, is lower than the average for all CU Boulder graduates with a bachelor's degree, according to a survey by Esmi Alumni Insight of 25,000 alumni who graduated during that same stretch.

The linguistics department has an extensive list of alumni that are either working or have worked in a variety of industries across the globe. Some alumni of the program include: