In the span of less than 48 hours in May 1974, two car bombings killed six Chicano activists in Boulder.

More than a half-century later, the case remains unsolved. And for most of that time, “Los Seis de Boulder” had gone unrecognized on campus.

Jasmine Baetz, then a Master of Fine Arts student and part of CU’s Engaged Arts and Humanities Scholars program, first learned about Los Seis from a documentary she saw as a freshman.

Community members piece together a mosaic of Neva Romero, one of Los Seis, now memorialized in sculptures on CU Boulder's campus. Photo by Lauren Click. 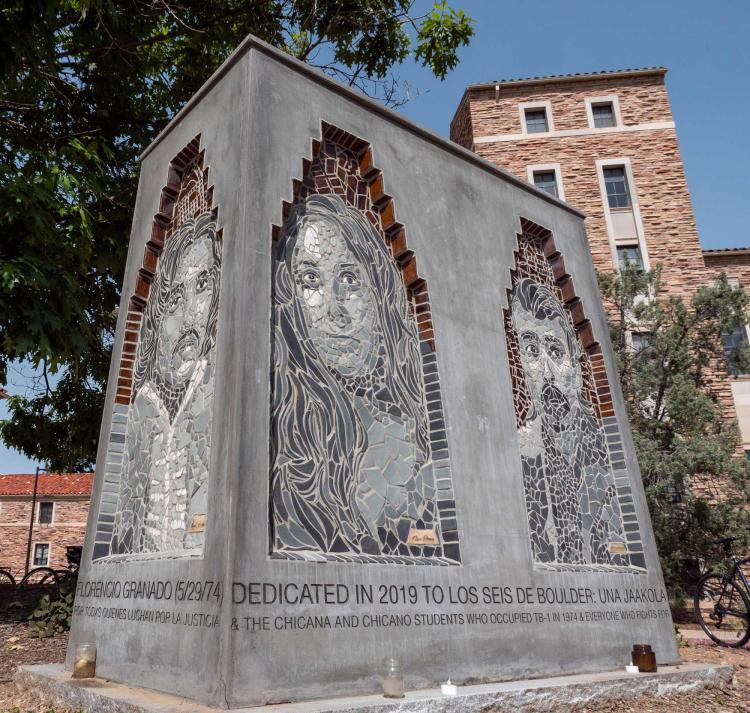 Jasmine Baetz talks to CU Science Discovery campers about one of the mosaic portraits. Photo by Lisa Schwartz, CU Boulder.

“I couldn’t believe this happened here, six students died, and they weren’t memorialized on campus,” she says. Baetz vowed to change that, and less than two years later, she did. In July 2019, a ceramic mosaic memorial she created in collaboration with hundreds of students, faculty, community members and families of Los Seis was unveiled in front of Temporary Building No. 1, just northwest of the Rec Center.

Baetz served as maestro of the two-year collaboration, in which community members did everything from roll out sheets of clay to cut and smooth pieces, which were then fired in a kiln. After glazing and refiring, the pieces were laid out on printed portraits of Los Seis.

Baetz initially secured permission from campus officials for a six-month temporary installation. After students protested a March decision to designate the sculpture “indefinitely temporary,” CU officials announced Sept. 16 that it will remain on permanent display in its current location as part of the University Libraries’ Special Collections, Archives and Preservation department.

“The people I encountered have been supportive and really feel this is an important thing to have on campus,” Baetz says.

Baetz acknowledges sensitivity, even controversy, surrounding Los Seis. Police and FBI investigators at the time believed the activists were killed while building bombs after months of tension between the university and Chicano activists. But a later grand jury investigation into survivor Alcantar found no basis for an indictment.

“It’s never been crystal clear to me,” Steinwand says. But she remains skeptical of investigators’ claims: “Two accidental bombings? The case falls apart at that point for most logical people.”

“These were students, activists, people,” she says. “It’s important to both remember the contributions they made to this campus and that they were people who were loved by their families and communities.”

Baetz says the memorial reflects the more enlightened ethics of the 21st century while still reckoning honestly with a critical moment of CU and Boulder history.

“Literal and symbolic space must be established for minoritized students, communities and histories on campus for an equitable future,” she says.

For Steinwand, the memorial has provided an opportunity to reestablish a “heartfelt connection” with her sister. It may have “different meaning for different people,” she says, but that’s a good thing.

“To educate and celebrate, create a space that’s really significant to this story,” she says, “that’s part of what Jasmine (has done).”