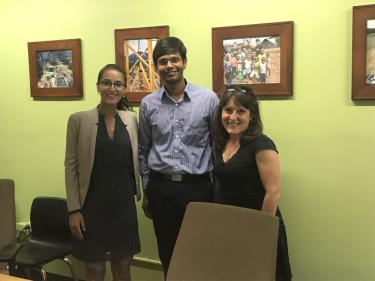 CEAE Department Professors Dr. Shideh Dashti and Dr. Abbie Liel worked with then PhD student Balaji Paramasivam to research the effects of prefabricated vertical drains (PVDs) and other liquefaction mitigation techniques on building performance. Their findings were published and selected as an Editor’s Choice in the October 2018 Issue of the Journal of Geotechnical and Geoenvironmental Engineering.

Liquefaction occurs during earthquakes when the rapid movement of the ground causes soils to behave as liquids. This is extremely hazardous to structures because soils offer no support when they are undergoing liquefaction. As engineers seek to better design buildings to resist seismicity, they have looked for methods to lessen the effects of liquefaction. One method for liquefaction mitigation is the use of PVDs. By increasing the amount of water drainage from the soil, these drains can lessen the liquid behavior of the soil during earthquakes. The group at CU sought to experimentally determine the effect PVDs have on the performance of structures built on foundations using them.

Dashti, Liel, and Paramasivam used the centrifuge located in the Center for Infrastructure, Energy, and Space Testing (CIEST) to perform their experiment. This centrifuge allows for scaled modeling, which allowed the researchers to simulate the effects PVDs would have on a 3 and 9 story building, with moment-resisting frames. The centrifuge at CIEST scales up the gravitational force experienced by the prototypes, thus allowing them to behave as if they were life sized.

The research group noticed that while the PVDs decreased the displacement of the structure due to ground liquefaction, they did induce greater strains on the buildings during seismic events. The effectiveness of PVDs as earthquake damage mitigation was shown to depend on the properties of the superstructure. This has generally not been considered in design and will be important for engineers to consider while designing structures in areas with high earthquake potential.