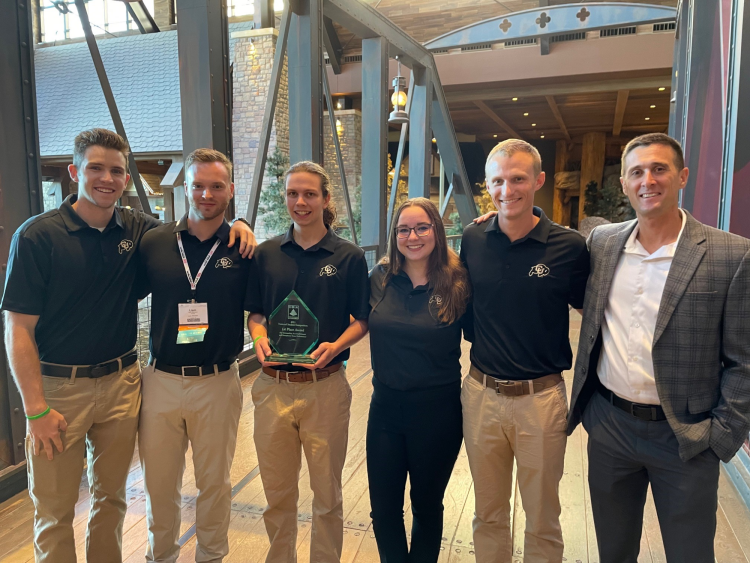 The team, comprised of students Liam Atkinson, Spencer Chuck, Evan Dicks, Hayley Hansen and Kai Reimers, presented their winning proposal during the national Design-Build Conference & Expo, which was held in Denver on Nov. 1-3.

The competition challenged teams to create a proposal for an 8,800-square-foot student health facility for a liberal arts college utilizing the design-build process.

“We had to prepare a statement of qualifications, a preconstruction schedule, design renderings, talk about our management approach, how we will manage costs, and how we would get the project done on time,” said Evan Dicks, team captain and a civil engineering PhD student. “We put in a lot of time in and it feels good to come out on top.”

In addition to preparing a 38-page statement of qualifications and a subsequent 33-page proposal, the team presented their project in person before a group of industry judges.

“This was exciting for the students. There was some tough competition,” said Matt Morris, associate teaching professor in the Department of Civil, Environmental and Architectural Engineering and the team’s faculty advisor. “We’re very proud of them. It was hundreds of hours of work.”

Dicks said the competition offered a unique challenge to all the team members and that everyone rose to the occasion.

“We all know group projects where 1-2 people are carrying the load, or one person dragging and everyone has to carry them, but this was a team effort through and through,” Dicks said. “Midterms came up right around when deliverables were due, but everyone managed their time.”

In traditional project delivery, the designer and contractor work separately. In the design-build process, they function as a team, providing unified recommendations to fit an owner's schedule and budget.

The competition offers teams a chance to utilize the process as students, gaining valuable experience and skills, in addition to national recognition among industry professionals.

“Companies know the value of this competition,” Dicks said. “It’s definitely an asset. Many companies at the event wanted to meet the students.”

The competition began with 16 teams from 14 universities. It had three phases, with teams initially asked to complete a statement of qualifications. Regional winners were selected in late September and asked to prepare formal proposals. Three finalists — CU Boulder, the University of Arizona, and the University of Florida — were then named to present live during the national expo.