Like most of his fellow architectural engineering majors, he was finalizing his year-long capstone project, which required his team to design a commercial building, from the architecture down to the HVAC systems. Anthony also had the added challenge of a design-build class final project in the Program in Environmental Design. 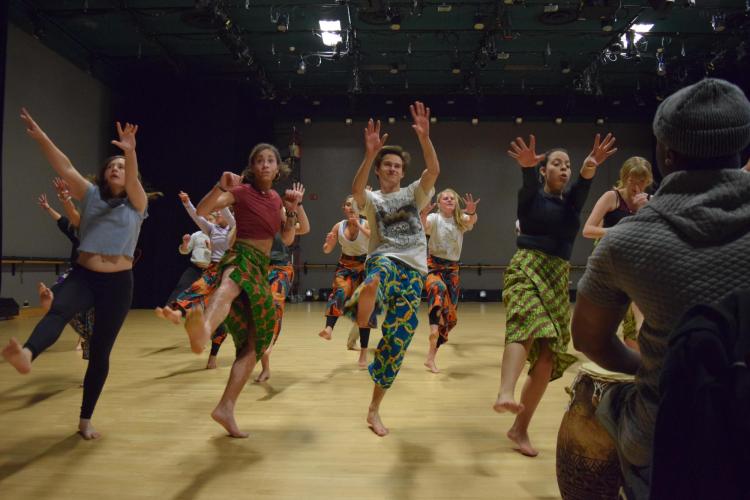 But his hardest class of the semester? African dance.

“It’s kicking my butt!” he said. “I’m so uncoordinated. I’m really great at remembering things and following processes, but when it comes to remembering how exactly to move my body to do the Ghanaian butt-pop move the right way, it’s really hard.”

Anthony is taking the class as a form of cultural preparation for his trip this summer to Eswatini with Engineers in Action (formerly Bridges to Prosperity), where the chapter will be working on their third footbridge in the southeastern African nation.

It’s that dedication to international understanding and communication that has earned Anthony the College of Engineering and Applied Science’s Outstanding Graduate for International Engagement for spring 2019.

Anthony joined Engineers in Action his sophomore year when he transferred to CU Boulder from the University of Denver. He said he liked the close community of the group, which usually sends teams of eight students abroad to work on footbridge projects.

During his time with the group, he has served as a project leader, grant writer and president. For this summer’s project, he will be serving as cultural relations manager. In preparation, he’s been dancing, taking an online course in international development and leading weekly discussions with fellow team members on cross-cultural issues they may encounter.

Overall, Anthony thinks it’s important for students to understand that while they may be able to provide some engineering expertise, the communities they visit have plenty of autonomy and capacity.

“The difference we make comes from the partnership we form with communities abroad and showing students that they can make an impact on the globe through engineering,” he said. “That has a lot of responsibility that comes with it, and if you do it the right way and the intentional way, you can make a really big impact.”

Professor Keith Molenaar said Anthony’s contributions go well beyond the CU Boulder team. The transition to Engineers in Action was a challenging time for Bridges to Prosperity student teams across the country, but Anthony helped ease the turmoil by preparing a year-end report that documented the successes and failures of the university programs in order to share best practices.

“This was a foundational document in shaping the separation of the EIA Bridge Program from B2P and helped give clarity to the services university teams could provide and the support they would need from an adopting nonprofit,” Molenaar said in recommending Anthony for the college’s award.

Life will not be letting up for Anthony after graduation. Immediately after commencement, he will leave for a conference, returning just in time to head off to Africa with his team. He’ll return from Eswatini on July 1 and start graduate school at the Leeds School of Business two days later.

During his master’s studies, he’ll be looking at how data science can help better inform international development projects, especially in terms of resilience to the challenges projects will face in the future.

“I want to maintain a connection to the developing world by looking at how we can use data science in combination with design and engineering to create really livable, really well-thought-out and analyzed places that are resilient to environmental and social disaster,” he said.