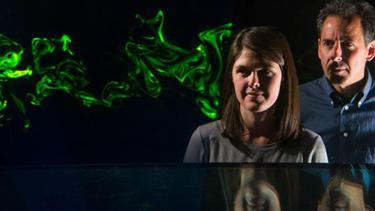 CU Professor John Crimaldi is the lead PI on a $7 million BRAIN Initiative collaboration funded by the NSF since 2015 to understand how animals navigate through odor plumes, and how the brain functions during this process. The Odor Navigation project involves seven investigators at six institutions (University of Colorado Boulder, University of California Berkeley, NYU Langone School of Medicine, University of Pittsburgh, Yale School of Medicine, and the Weill Cornell Medical College). Through this effort, the team is investigating the spatiotemporal structure of chemical plumes in air and water, developing odor-based search algorithms that could be implemented in autonomous vehicles, and creating mechanistic models of animal brain function during odor navigation.

This summer the Odor Navigation team published three papers on their findings:

The first paper, led by investigators at CU and published in Experiments in Fluids, describes experimental techniques developed in Crimaldi’s lab for creating and quantifying the spatiotemporal structure of airborne odor plumes in the laboratory using ultraviolet laser-induced fluorescence.  The data from this study were then used in the studies described in the second two papers.

The second paper, led by investigators at Weill Cornell Medical College and published in PLoS Computational Biology, uses an information-theoretic analysis to investigate which odor-sampling strategies are most informative about determining the location of an odor source.

The third paper, let by investigators at NYU Langone School of Medicine and published in eLife, uses experimental studies of fruit flies to relate odor navigation behavior to neural activity in the fly’s brain, forming the basis for a mechanistic model of brain function.

The third paper was the subject of a separate “Insight” article also published this summer in eLife.  Insight articles explain why a particular paper is significant in a given field of research, thus giving the paper broader exposure and impact.

Together, these three papers advance current knowledge of the structure of odor plumes, the relevant information embedded within the plumes about source location, and the neural algorithms used by animals for effective source localization.

The team’s research was previously featured on the PBS NewsHour program:
Read the PBS article
Video: What a smell looks like