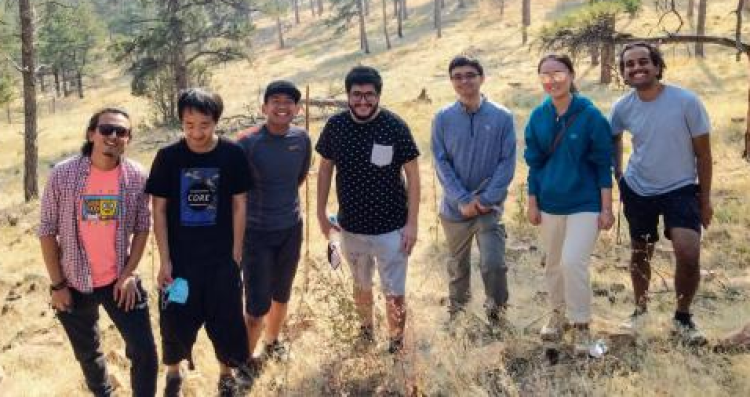 Above: Members of the Ding research lab gather for a team hike. Top: A typical microfluidic device for drug delivery treatment capable of treating millions of cells within one minute. In this device, immune cells are loaded through an inlet needle and collected from the outlet needle.

“This funding has the perfect timing to help expand our research,” said Ding.

With current immunotherapy treatments, when disease-fighting white blood cells called T-cells tire and can no longer seek out and destroy cancer cells, modified forms of those cells can be introduced to help the body treat itself. But it’s an imprecise and costly procedure.

Started July 1, the five-year award supports the Ding Lab’s efforts to learn how to efficiently and precisely disrupt cell membranes so that treatment can be introduced to improve cell function, as well as how to repair the membranes faster. In particular, the researchers will attempt to standardize a process that can be automated for millions of cells in a second.

The results are not yet precise enough for commercial use — the mechanisms of cell membrane disruption and cell response to such disruption are not entirely clear — so the team will investigate the process behind controlling doses. They’ll learn whether the procedure becomes more efficient when they monitor the size and number of “pores” at the cell membrane of a cell, for instance.

The team will also attempt to control the cell membrane disruption and how quickly it recovers from rupture after treatment is delivered. Because an individual cell will die if its membrane is disrupted too much, the researchers plan to learn what level of disruption they can achieve safely and when they should stop. They’d also like to glean ways to help cells recover to create a stronger rupture that can be repaired later, said Ding.

His lab achieved promising earlier findings in their investigation of cell behavior, including a 2020 discovery that allowed them to diagnose sickle cell disease with greater sensitivity and precision in less than one minute.

Speedy processing could also improve treatment costs for cancer and other diseases.

The principal investigator on this NIH grant, Ding started his academic studies in microelectronic and mechanical engineering.

Focusing on technology development, he looked for applications for the work. Then he realized that was not the best approach, recognizing that drug delivery is a broad category and depends on each disease and its applications. So as a postdoc pursuing chemical and biomedical engineering learning in immunotherapy, he absorbed medical problems first, then developed strategies to deliver treatment for them.

“I want to deliver treatment at high efficiency and with low costs. That’s the goal. I’m working in problem-driven research,” Ding said.

The goal of the NIH Maximizing Investigators’ Research Award is to increase the efficiency of National Institute of General Medical Sciences funding by providing investigators with greater stability and flexibility, thereby enhancing scientific productivity and the chances for important breakthroughs. This grant is believed to be the first MIRA granted to anyone in the Paul M. Rady Department of Mechanical Engineering.