Safe, disaster-resilient housing is critical to our way of life, prosperity, and sense of security. Yet, many houses remain vulnerable to damage from earthquakes, hurricanes, and other hazards, affecting communities in the near and long term.

In this webinar, Professors Amy Javernick-Will and Abbie Liel will describe findings from research that their team conducted to enhance housing safety in the multi-hazard context of Puerto Rico.

Considering that a large portion of housing stock is built informally, where building codes and regulations may not be followed, they argue that how builders and residents perceive housing safety influences how housing is designed, built, and maintained.

Focusing on one misalignment, the installation of hurricane straps, they will discuss their initial efforts to build capacity in the region by partnering with a community-based organization.

Find out more and register to attend 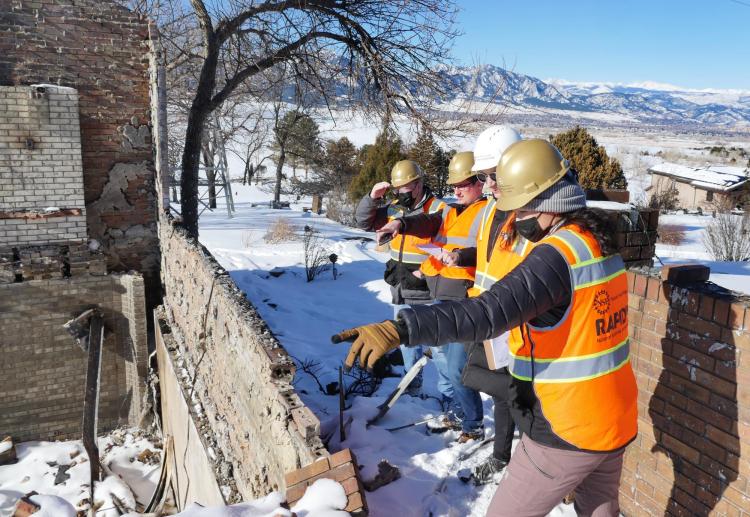 The Marshall fire screamed across the prairie, exploding into homes with 80 mph winds and destroying entire neighborhoods. It caused over a billion dollars in damage in less than a day and took everything from more than 1,000 homeowners in Superior and Louisville, Colorado, leaving behind little more than ash and concrete foundations.

Nine months have passed since the disaster, and as families work to rebuild, an interdisciplinary team of University of Colorado Boulder researchers has received a major National Science Foundation grant to study long-term community impacts to help improve outcomes from future disasters.

“In this project, we’re really interested in how jurisdictions and homeowners are rebuilding, particularly in light of future risks,” said Amy Javernick-Will, a professor of civil, environmental and architectural engineering and lead investigator on the grant. “There have been other fires in California and Oregon, but the scale of this destruction was pretty dramatic.”

As disasters increase, destroying homes and infrastructure, families and governments have to make decisions on how to rebuild. Those decisions include adoption and enforcement of building codes that can have a long-term influence on community outcomes in resiliency and environmental sustainability. Those codes, however, come with a tradeoff, including potential increased costs and time to rebuild.

It is an obstacle facing one member of the research team first-hand. Matthew Koschmann, an associate professor of communications, owns a rental property in Superior that was destroyed by the fire.

“Do I want to incorporate this new ordinance or opt out? I’m part of these conversations on Slack channels online. Some people are saying we should upgrade our houses to be more fire resilient, that it will help protect the entire neighborhood, but others are saying the added cost to their rebuild is insurmountable,” Koschmann said.

The research is particularly focused on the social aspect of rebuilding: how communities are connecting, influencing each other, and making major decisions about moving forward. A goal of the grant is  to provide guidance on the decisions and uncertainties homeowners and governments face during the rebuilding process and identifying the processes and codes that meet collective goals after a disaster.

“In fires, what your neighbors do affects your property,” Javernick-Will said. “This shared action is really important, and we want to uncover this process. Most studies look at just the immediate response, the first couple of weeks. There are far fewer long-term studies.”

Much of the work will be conducted through personal interviews with homeowners, as well as builders, insurance companies, and municipal government officials. Noah Gershon, a civil engineering PhD student, is leading this part of the effort.

“There is a complicated interplay between the different groups,” Gershon said. “We want to study each to see how we can make things better. There’s a perception that after a disaster, everything is taken care of and funding is available for everyone. It’s just not true. Homeowners have to figure out a lot themselves. We want to improve that process.”

A goal of the work is to bridge the gap between engineering and human social interaction to understand the real-world impacts of decision making after disasters.

“There are complex social interactions here. It isn’t just technical scientific stuff. It’s both,” Koschmann said. “There’s a level of stress and tension that’s part of it and dealing with different insurance policies, neighbors, building codes. This isn’t abstract. It has real personal impact.”

In addition to Javernick-Will, Koschmann, and Gershon, the research team also includes Abbie Liel, a professor of civil, environmental and architectural engineering, and Megan Ellery, a civil engineering PhD student.