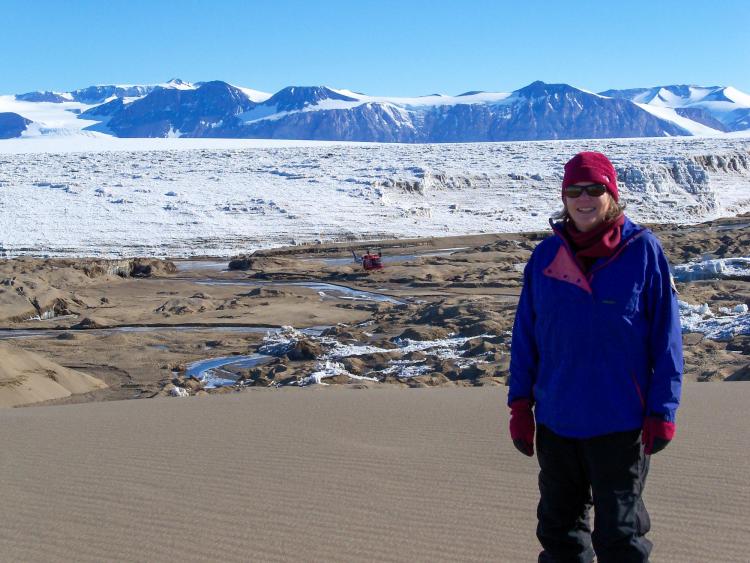 Diane McKnight is being recognized with the highest honor bestowed upon faculty in the University of Colorado system: Distinguished Professor, which is awarded to faculty for exemplary performance in research, teaching, and service.

A professor in the Department of Civil, Environmental and Architectural Engineering; the Environmental Engineering Program; and the Institute of Arctic and Alpine Research, McKnight has spent her career studying ecological, biogeochemical and hydrologic processes in lakes, streams and watersheds, primarily in polar and mountain regions.

“I’ve been interested in hydrology and ecology since I was in college in the ’70s,” McKnight said. “It’s fascinating work and directly impacts our understanding of water quality and the influence of climate and hydrology.”

Her research has dramatically expanded knowledge about the relationship between natural organic matter and heavy metals in streams and lakes and led to her election to the National Academy of Engineering in 2012.

Much of her field work has been in extreme environments, especially polar regions – she has been to Antarctica more than two dozen times.

“The lessons that we learn in Antarctica get plugged in more broadly. The algae growing in streams there are very similar to algae growing in Colorado, but we can understand more clearly what’s happening there because there is no signal coming in from plants in the meadow or in the forest because there aren’t any meadows or forests,” she said. “They’re like naked streams. We can learn about fundamental processes.”

McKnight is one of the founding principal investigators of the McMurdo Dry Valleys Long Term Ecological Research Program in Antarctica, and she serves as chair of the National Science Foundation’s LTER Science Council.

“As we think about green engineering for green infrastructure, people are putting more value on sustaining rivers to help deal with floods in cities and various pollution issues. These ecosystem concepts are also very relevant to dealing with hazardous algal blooms,” she said. “There’s a realization that some of the water challenges can’t just be addressed by treating drinking water at the utility plant. We need a more holistic approach, a bigger view.”

McKnight earned her PhD in environmental engineering at the Massachusetts Institute of Technology in 1979 and spent 17 years at the U.S. Geologic Survey, conducting field and laboratory research, before joining CU Boulder in 1996.

“I was at the USGS and had grad students working in my lab from CU Boulder, Colorado State, and the School of Mines. I really wanted to teach stream ecology. It’s an exciting field and the students are excited, too,” she said.

She was one of the founding faculty members of CU Boulder’s Environmental Engineering Program when it began in 1998 and has been part of its growth as an important discipline in the College of Engineering and Applied Science.

“We have as many students in a single environmental engineering class now as we had in the whole program when it started. It’s to CU Boulder’s great credit that this program has been supported and evolved,” she said. “I am glad to be part of how we deliver this curriculum and train our students. I am so indebted to my colleagues at INSTAAR and in environmental engineering who have been very supportive.”

Although McKnight is in the middle of a semester-long sabbatical, conducting remediation research on the hydrology of the Florida Everglades, she is eager to be back on campus for the spring 2022 semester.

“It’s a great privilege to teach a class and to advise and mentor students. You’re providing scope, being open to their ideas and also helping them stay focused and to take setbacks in stride,” she said. “They are so motivated and unafraid. It’s inspiring.”