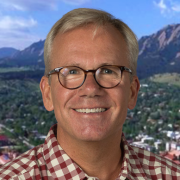 Gregor Henze is expanding renewable energy research Down Under.

A University of Colorado Boulder professor in the Department of Civil, Environmental and Architectural Engineering, Henze is a 2021 honoree of the Fulbright Distinguished Chair in Science, Technology and Innovation.

Through the initiative, Henze will spend a semester in Newcastle, Australia at the Commonwealth Scientific and Industrial Research Organisation (CSIRO). Henze anticipates traveling to Australia to begin the fellowship in February 2022. A scholar in renewable energy, energy efficiency and distributed energy solutions, Henze will be sharing his expertise as a CU Boulder professor and as associate director of the Renewable & Sustainable Energy Institute on campus. Henze also holds a joint appointment at the National Renewable Energy Laboratory in Golden.

“Australia is a vast country with similar challenges to us with large energy systems covering large distances,” Henze said. “We and they alike are trying to transition to low-carbon or no-carbon fuels. They’re especially interested in how buildings, mostly commercial buildings, can benefit from data-driven digitalization.”

An area of focus for Henze, data-driven digitalization of the energy sector includes predictive HVAC controls and systems to detect faults in existing buildings as well as adding renewable energy and batteries that can feed power back into the grid.

“There’s an often-quoted estimate that you can walk into any US commercial building and save between 10-30% through better controls and fault detection. Buildings are not run well and are not run efficiently,” Henze said. “But just focusing on that is not enough. We also must focus on the greater system and building-to-grid interaction -- to have 5.5 million commercial buildings that instead of just being merely energy sinks, they also produce, shift, and store electric power. However, such an energy system becomes vastly more complicated.”

Although integrating significant numbers of commercial buildings into the grid in this way increases complexity, Henze said it supports a greener future for power generation.

“Roughly 75% of our electricity is consumed by buildings. I started my career working on the large-scale power generation side: nuclear power and traditional fossil-powered designs. But I felt like it was incremental and that we needed to change the way we use energy, which got me interested in demand and buildings,” Henze said.

The Fulbright honor is a unique callback for Henze to an earlier time in his education – when he was an graduate student selected for the program’s better-known student scholarships, which bring foreign college students to America for study.

“I’m particularly humbled because a long time ago I was privileged to be a Fulbright scholar as a student from Germany coming to the United States. It’s coming around full circle, in a way,” Henze said. “I planned to be here one year in 1990-91. Now 30 years later as a naturalized American, I’m hoping to bring American research excellence to Australia, serving as an ambassador for the United States. It feels like an enormous honor to be chosen.”