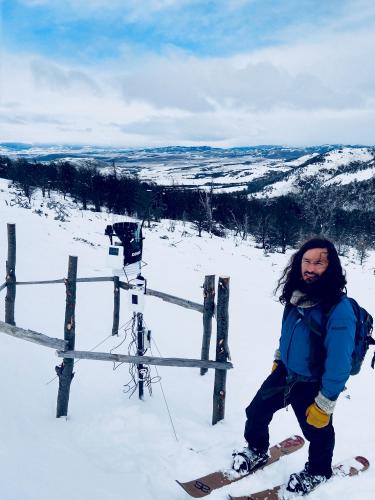 A PhD student at CU Boulder discusses his inspiring work in the Aysén region of Chilean Patagonia that took place between March and November 2018.

Mickey Rush is currently pursuing his PhD in the Hydrology, Water Resources and Environmental Fluid Mechanics group of the Department of Civil, Environmental and Architectural Engineering, where he works alongside his advisor, Professor Harihar Rajaram. Mickey focuses on modeling the impact that changes in the snowpack energy balance have on the patterns of seasonally frozen ground at the mid-elevation montane zone of the Colorado Front Range. Supported by a Fulbright grant and the CZO-SAVI International Scholars program, Mickey worked in collaboration with the Centro de Investigación en Ecosistemas de la Patagonia (CIEP) in Chile to further his studies. While abroad, he studied the vulnerability of high-elevation, snow-dominated catchments in the Río Coyhaique watershed at Coyhaique Alto, Aysén, using weather stations, soil sensors, and streamflow measurements. Mickey then utilized his findings with the local government water authority to develop a plan for the allocation of streamflows in the region that will help to preserve minimum ecological flows.

“My modeling work highlighted the long-term risks associated with relying on arid, inland watersheds as a source of water for the growing region of Aysén, Chile, especially in the context of shifts toward lower precipitation, less of which as snow. Although water users in western Patagonia may be accustomed to low flows during dry summer months, spring and fall have traditionally been high flow seasons.”

Please tell us a little bit about yourself.

I am a computational hydrologist and fancy myself an amateur mountaineer/gardener/musician. My academic home is the Hydrology, Water Resources, and Environmental Fluid Mechanics group of the Department of Civil, Environmental and Architectural Engineering, where I am working on a PhD modeling how changes in the snowpack energy balance at the mid-elevation montane zone of the Colorado Front Range may alter patterns in the formation of seasonally frozen ground, and to what extent these frozen soils impede infiltration of snowmelt.

We want to hear more about your trip! Who did you work with and what were you researching?

From March to November 2018, I worked with the Centro de Investigación en Ecosistemas de la Patagonia (CIEP) in the Aysén region of Chilean Patagonia supported by a Fulbright grant and the CZO-SAVI International Scholars program. With the help of my collaborators, I deployed weather stations, installed soil sensors at multiple depths, and measured streamflow in two small catchments in the headwaters of the Río Coyhaique watershed at Coyhaique Alto, Aysén: one catchment is dominated by old-growth forest, while the other has been deforested by recent firewood extraction and widespread burning practices used in the first half of the 20th century. I built a simple hydrologic model and drove it with measured meteorological data to match present-day Río Coyhaique streamflow. I then forced the model with simple climate projections, which suggested streamflow reductions in spring and, to a lesser extent, fall.

I developed an informal collaboration with a water manager at the government water authority Dirección General de Aguas who would like to incorporate projected changes in precipitation and climate conditions in the South Pacific into streamflow allocations in a way that preserves minimum ecological flows. I demonstrated the feasibility for such a project by compiling and analyzing historical streamflow, precipitation, and temperature data throughout the region of Aysén and Chile at large. Collaborators in the region are hoping to fund a Chilean student to bring this goal to completion using statistical techniques. 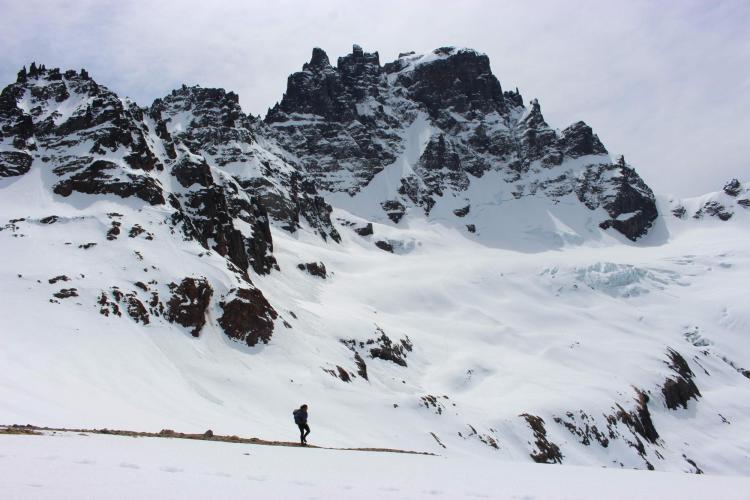 Why Patagonia? Were there certain research subjects or people you wanted to work with there?

I have always been drawn to South America and had spent a few months in Venezuela during the spring of 2013. My research in Colorado focuses on cold regions hydrology so after learning of CIEP, I started reaching out to researchers whose interests overlapped with mine.

What did you accomplish during your time in South America, both as a researcher and personally?

I developed confidence as an independent researcher, and learned to select, instrument, and maintain field sites. At one point we built a fence around the weather station to keep the sheep from chewing the cables. The Fulbright was also a great opportunity to try my hand at a wide range of modeling techniques, develop ideas, and build a hydrologic model. I took advantage of the winter evenings to learn new Python packages for working with long-term records of streamflow, temperature, and precipitation.

My Spanish improved quite a bit; castellano chileno is a difficult variant for a non-native speaker to understand. I found scientific communication to be easiest, as most of the technical words are intuitive, e.g. computación, hidrología, temperatura. I enjoyed drinking yerba mate with rural farmers, ranchers, and hermits, who always had plenty of interesting stories to tell about climate changes (e.g. snowfall, soil freezing depth) that they have witnessed over the years in Aysén. In their eyes, climate change is not controversial; it is just a fact of life! I learned to live without running water, central heating, reliable internet, a clothes dryer, and a refrigerator.

How does this tie in with your research/education here in Boulder? Are you or other CU students planning on returning to South America to continue the research?

The “reference” and “impacted” slopes at Coyhaique Alto, Aysén are an interesting comparison to the Boulder Creek Critical Zone Observatory’s north- and south-facing slopes at Gordon Gulch, CO that I have been modeling for the past couple years. In particular, the soil temperature time series from the two slopes show some important differences that lend insight to my work with seasonally frozen ground.

My collaborators in the region continue to maintain the stations with the support of CIEP, and plan to build a 3-4 year record that can serve as the basis for a longer study as we learn more about the extent to which the hillslope water balance is determined by microclimate, vegetation, and hydrogeologic effects. CIEP suggested that I come back for a post-doc position, but I am not ready to return just yet! The region could really use an expert on air quality to work on the growing wood smoke problem (Coyhaique, Chile has been ranked as having the worst air quality in the western hemisphere!). 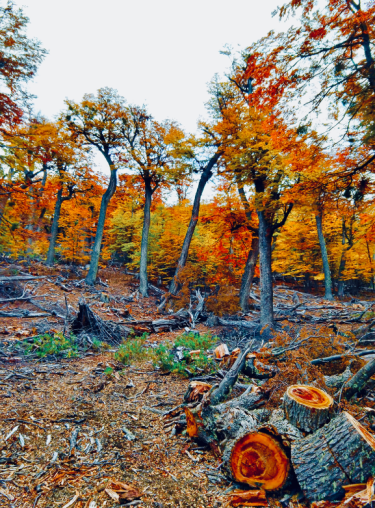 What are your future plans and did your experience in Patagonia affect or change them?

I hope to finish my PhD in the next year, and then use some combination of skills in Python, writing, and field science. I would like to return to the tropical Andes someday, perhaps to study the high-elevation páramos in Ecuador or Colombia. Longer term, I have thought it would be interesting to serve as an editor for a non-technical environmental publication like High Country News or the Minnesota Conservation Volunteer.

Do you have any advice for students considering a similar experience to your own?

If you are a PhD student considering a Fulbright grant, it is best to go on your Fulbright before passing your comprehensive exam! Nine months is just long enough to upend one’s life (e.g. one will undoubtedly be replaced by one’s former band). If you plan to travel to the southern hemisphere, I would advise requesting that the Fulbright commission allow you to adjust your grant dates to include the austral summer!

I like memorable factoids: The city of Puerto Aysén receives on average almost three meters of precipitation per year, while less than 100 kilometers inland, the pampas receive about one half of a meter. You could ride your bike from arid grasslands to temperate rainforest in less than a day!

I was initially surprised that tree lines were lower at 45 degrees south (~4000 feet) compared to those of North America’s Pacific coast at 45 degrees north. Near the end of my trip I learned that the Humboldt current bringing cold water from Antarctica to the Pacific coast of the Southern Cone suppresses air temperatures, which commonly determine tree line elevation.