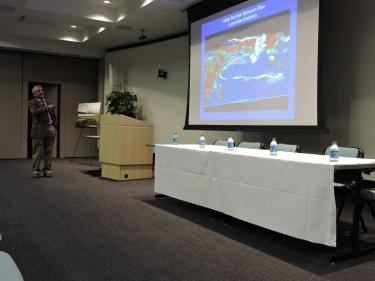 CU Boulder hosted the 2018 CU Climate & Health Research Summit on Tuesday, October 16. The summit, formed through a partnership between CU Boulder and CU Anschutz brought together researchers and practitioners from the fields of climate science and healthcare to discuss the global challenges facing people as the world’s climate changes. The summit was a part of the CU Grand Challenges initiative and was showcased during the CU Boulder 2018 Research & Innovation Week.

The Climate & Health Research Summit included a full day of speakers and panels at SEEC as well as a reception and lecture at the Fiske Planetarium on “Climate Change Connections: Associations, Processes, and Incorporation in Infectious Disease Forecast” by Dr. Jeff Shaman from the Climate and Health program at Columbia University. The event at SEEC featured speakers from the Boulder and Anschutz campuses discussing the public health issues the world is facing due to climate change. 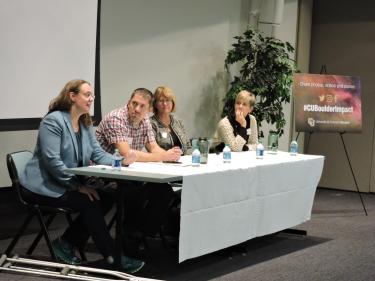 Professor Rajagopalan Balaji from the Civil, Environmental and Architectural Engineering Department was a co-organizer of the event and his plenary lecture was on “The Once and Future Variability of the Indian Monsoon”, a weather phenomenon relied on by billions. Environmental Engineering Professor Shelly Miller discussed the “Impact of Doing Nothing vs. Mitigation on Urban Air Pollution as the Climate Changes.” Other speakers discussed subjects including the health effects of water quality and quantity, climate’s effect on malaria, the association between hurricanes and cardiorespiratory hospitalizations, and climate’s effect on human migration. In addition to the speakers, there were several panels featuring researchers discussing on climate education and innovation in the Climate-Health interdisciplinary field.

The inter-campus summit between Boulder and Anschutz highlights the important discoveries that can be made by expanding research to include work from other, seemingly different fields. This and other accomplishments will be visible across CU Boulder’s campus as the Research & Innovation Week continues.