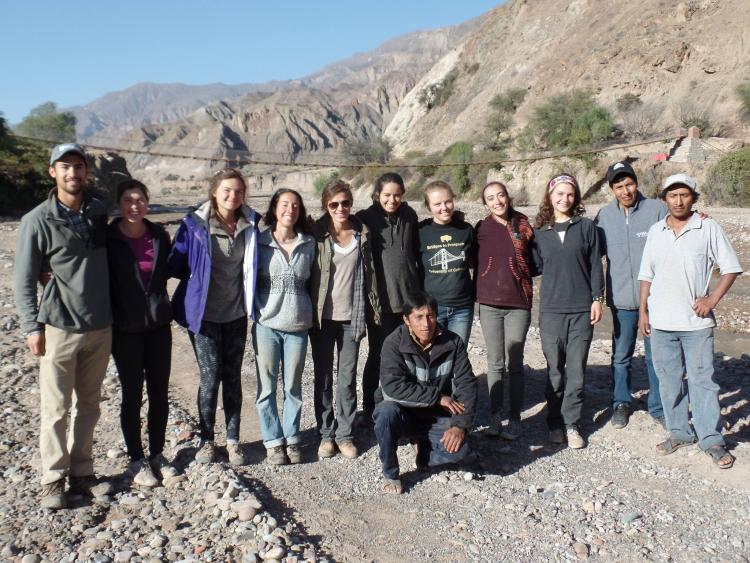 During her first trip with Bridges to Prosperity (B2P) last summer, civil engineering major Mia Schrilla learned an important lesson that should serve her well in her career.

“Prepare for anything,” she said. “Things will probably go wrong, and you’ll probably get through it.”

The fourth-year BS/MS student and a team of seven other women spent three weeks in Samaca, Bolivia, to construct a footbridge across the River Luribay, allowing community members to access schools and markets that they had been cut off from during the region’s rainy season.

The team’s road to Samaca was not an easy one. While B2P teams usually are assigned a site in the fall and have the rest of the year to make a construction plan, country-wide mayoral elections in Bolivia complicated the process for their project, Schrilla said.

Because they received their site assignment late, engineers at B2P had to quickly finish the plans and send them to the team in Bolivia. Then, after traveling all night to reach the site, the team encountered their second challenge.

“They were having a welcome celebration, and at one point we realized they were saying they wanted a vehicular bridge,” Schrilla said.

B2P CEO Avery Bang (MSCivEngr’09), who was spending a few days with the team, had to explain to community leaders that they couldn’t update the footbridge design.

“That became the theme of the trip,” Schrilla said. “We went to another town after that, but we were the only ones who showed up every day. The mayor hadn’t told her community we were coming, but she didn’t tell B2P that.”

The team helped out at a B2P corporate site for about a week before finally being assigned to Samaca. Once they were there, they had only about three weeks – out of a planned eight – to complete the bridge.

“The last couple of nights, we were working by headlamp,” Schrilla said. “We finished in the afternoon of the day they had planned for the inauguration party.”

Even once they’d reached their final site, the team still faced challenges from community members who weren’t sure the women were up to the task. Schrilla laughed as she remembered men who’d come to help with the masonry work repeatedly telling the team to rest when they offered to help.

“Once we started using the power tools like the drill press and bandsaw, you could tell there was a difference in perception of us,” Schrilla said. “They realized we could do the work.”

And their abilities didn’t escape the attention of the women in the community.

“Their daughters started coming out, and they were really excited about what we were doing,” Schrilla said. “They started asking about universities here.”

One team member in particular made an impression not only on her teammates, but also on attendees at September’s Bridge Builder Conference, which brings together B2P volunteers from industry and universities. CU-Boulder chapter president Nicole Mayer won the Bridge Builder of the Year Award, partly for her contributions to the Samaca project.

Schrilla said the award was well-deserved. Once the team arrived at Samaca, she explained, the race was on to get the supplies to the site. Mayer, who had previously studied abroad in Chile, took charge of coordinating deliveries of materials so the project could stay on track.

“The more I think about it, the more unreal it becomes,” Schrilla said. “Now feel like we could handle anything here.”

In the end, Schrilla said, all of the challenges and frustration brought them closer together as a team and made them even more proud when they celebrated the completion of the bridge. She said she will always remember watching excited kids run back and forth across the bridge, waving Bolivian flags.

“Seeing the community be so proud of it was great,” she said. “It was really theirs, not just something we had given to them. The local community was just beaming.”