Bringing space inside the lab: Researchers replicate the climates of exoplanets to help find extraterrestrial life

Bringing space inside the lab: Researchers replicate the climates of exoplanets to help find extraterrestrial life

Header image: A view of the instrument, built by Ryan Cole (PhDMechEngr'21), as the experiment replicates the conditions on exoplanets, causing the experiment to glow with heat.

Scientists do not need to travel light-years away to chart the atmospheres of exoplanets, thanks to research happening in the Paul M. Rady Department of Mechanical Engineering with scientists at the Jet Propulsion Laboratory (JPL).

Ryan Cole (PhDMechEngr’21) has developed an experiment that recreates the actual climate of planets beyond our solar system inside a 2,000 lb. instrument at Professor Greg Rieker’s lab on the University of Colorado Boulder campus. By reaching the same high-temperature and high-pressure conditions found on many exoplanets, the instrument can map the gases in their atmospheres, which could one day help humanity find life on other planets.

“If we looked at Earth’s atmosphere, we would know that life is here because we see methane, carbon dioxide, all these different markers that say something is living here,” Rieker said. “We can look at the chemical signatures of exoplanets as well. If we see the right combination of gases, it could be an indicator that something is alive there.”

Rieker and Cole’s work can contribute to exoplanet transit spectroscopy – a research method to observe the composition of an exoplanet’s atmosphere. Scientists use a telescope to look at the light passing through it. As the light interacts with gases in the atmosphere, those gases absorb the photons as they move through.

“Scientists need a map for how to interpret what the light is telling us when it gets here,” Rieker said. “That is where Ryan’s experiment comes in. As we create this little microcosm of that exoplanet’s atmosphere in our lab, we send in our own characterized light with lasers and study the photons that come out. We can measure the changes and map how the light is absorbed.”

In collaboration with scientists at JPL, Cole and Rieker’s experiment combines sensor measurements with computational models to help detect the different gases on exoplanets. While Cole built the instrument that replicates the exoplanets’ climates and measures how light is being absorbed at those exotic conditions, JPL's Deputy Section Manager Brian Drouin’s lab supplied the tool that interprets the measurements.

Their research could optimize telescopes like the James Webb Space Telescope, which as of mid-December, is set to launch Dec. 24 from the European Space Agency’s site in French Guiana.

“The James Webb Space Telescope and others like Hubble are looking at the ultimate horizon of what humans can see,” Cole said. “Greg and I are trying to make their visions a little clearer. Our laboratory measurements can help to interpret the telescopes’ observations of distant planetary atmospheres.”

There are endless expanses of the universe for these telescopes to explore – more than 4,800 confirmed exoplanets and about 7,900 more that NASA says could be planets. With Rieker and Cole’s experiment factored into the expedition, our understanding of exoplanets and the gases in their atmospheres can be improved – and therefore, it also advances the search for extraterrestrial life.

How the instrument works 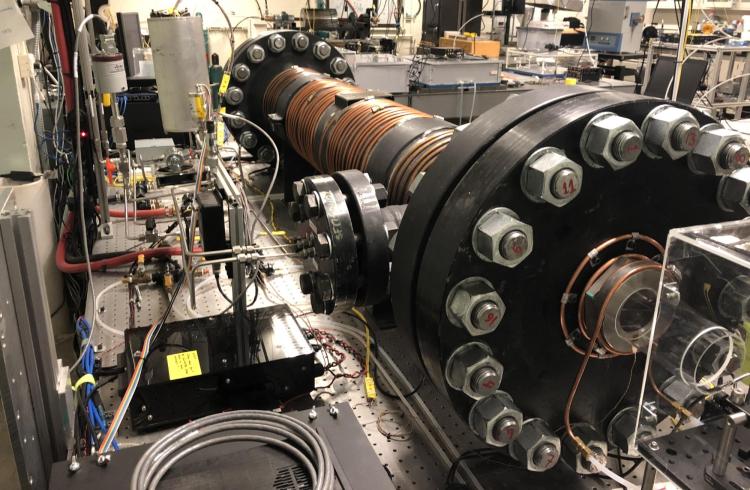 The high-temperature and high-pressure conditions found on exoplanets can be recreated inside this instrument.

“There really are not many systems out there that can reach the high-temperature, high-pressure conditions that we reach,” Cole said. “Not only do we need to reach those conditions, we also need the temperature and pressure to be extremely uniform and well-known. Achieving these criteria is one of the most unique aspects of our experiment.”

The size and scope of the instrument Cole developed is what allows them to reach the high-temperatures and high-pressures that are seen on exoplanets. The experiment inside the piece of equipment can get up to 1,000 degrees Kelvin, which is about 1,340 degrees Fahrenheit.

The 2,000 lb. instrument also has thick steel walls that are designed to reach 100 atmospheres. To put that into context, Earth’s mean pressure at sea level is one atmosphere.

Starting in 2016, when he joined Rieker’s lab, Cole had to work through about five iterations of the high-temperature, high-pressure cell before getting it right.

“Ryan is the first one to do it,” Rieker said. “He has created datasets that are really close to perfect.”

Once the conditions are reached inside Cole’s instrument, the team sends light through the experiment from frequency comb lasers, a technology that was the basis of Nobel-Prize winning research at the University of Colorado Boulder and the National Institute of Standards and Technology. The laser has hundreds of thousands of wavelengths of light that are very well-behaved, making it an ideal tool to study light-matter interactions.

“We pass the laser through this environment and in doing so, we record how the laser light interacts with the gas that we have confined in the core of this unique experiment,” Cole said. “We measure how the light has been absorbed at different frequencies, which can be used to interpret observations of actual exoplanetary atmospheres.”

Those measurements then go through JPL’s interpretation tool. That computational model extracts the fundamental quantum parameters that enable the team to map how the atmosphere’s gas molecules will interact with light at any condition.

Rieker compared the relationship between the measurements they attain and the parameters that JPL supplies to a JPEG, the standard format for image data. While we see the photo, the JPEG data is the code, or set of instructions, for the image.

In this case, the equipment in Rieker’s lab provides the photo – the exoplanet conditions and light passing through its atmosphere. The JPL tool provides the JPEG code – the data that describes how the light is interacting with gases in the atmosphere.

Applications for sustainability on Earth 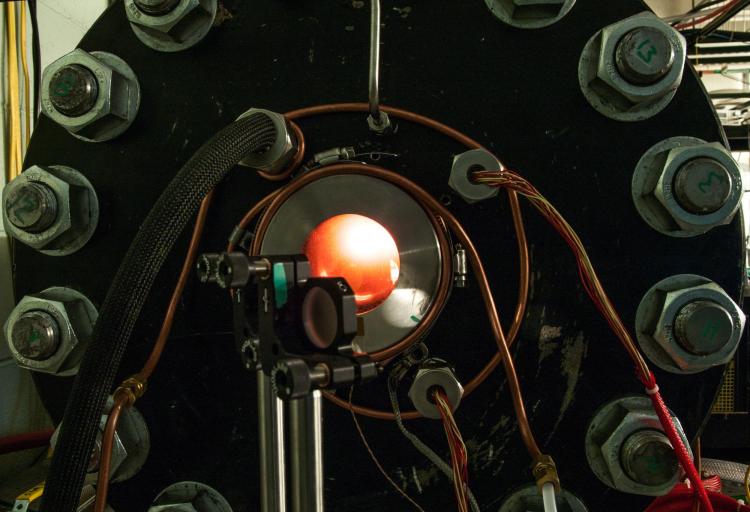 Looking inside the instrument when the experiment reaches high-temperatures and high-pressures.

Rieker’s work did not start with the goal of mapping exoplanet’s atmospheres. The original objective was to understand the combustion inside a rocket or aircraft engine. He had set out to chart the emissions coming from those engines, which can help society find more efficient ways to burn fuel.

“I think it is interesting that you can tie the applications of the instrument from a jet engine at the Denver International Airport to the atmosphere of a distant an exoplanet far from Earth,” Cole said.

The range of the technology’s function still allows the team to mimic the inside of a jet engine and map the gases being emitted, but while building the equipment, Cole recognized that the conditions inside the simulated engine were very similar to conditions on the surface of Venus – high-temperature and high-pressure.

“Venus is a really interesting planet because physically, Venus and Earth are very similar in terms of size and density,” Cole said. “There is an ongoing question in the planetary science community that says you can draw an interesting comparison between Venus and Earth. Does Venus give us another data point for how Earth-like planets evolve?”

Venus has an atmosphere that is almost 860 degrees Fahrenheit and is 95-times the pressure of Earth’s atmosphere. The planet is completely inhospitable largely due to a runaway greenhouse effect driven by the high amount of carbon dioxide in the atmosphere. The potent greenhouse gas traps heat in Venus’s atmosphere, leading to extremely high surface temperatures.

While Earth’s atmosphere is nowhere near the levels of carbon dioxide found on Venus, studies of Venus’s atmosphere could advance climate change research.

“Our equipment can help scientists better understand Venus and the evolution of atmospheres that are increasingly burdened with carbon dioxide,” Cole said. “The experiment can help our understanding of the atmospheres of Earth-like planets with a sample size of two planets, instead of just one.”

From the inside of an engine to the surface of Venus and distant exoplanets, the fundamental goal of Rieker and Cole’s work is to understand how light interacts with gas molecules. However, no matter the scope, the applications of Rieker and Cole’s research all have the same theme – to promote life. One day soon, that might include life elsewhere, not just on Earth. 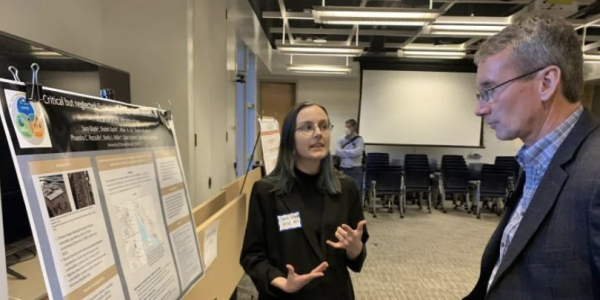 The slide deck is part of presentations given by IRT directors in April on accomplishments and activity within their themes to date. They include details on funding results, important research findings and other lessons learned from the initiative. END_OF_DOCUMENT_TOKEN_TO_BE_REPLACED 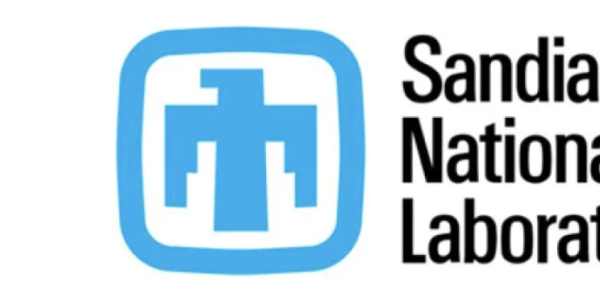 A new initiative between the College of Engineering and Applied Science and Sandia National Laboratories aims to develop areas of mutual research interest and support broader STEM workforce development among graduate students. END_OF_DOCUMENT_TOKEN_TO_BE_REPLACED 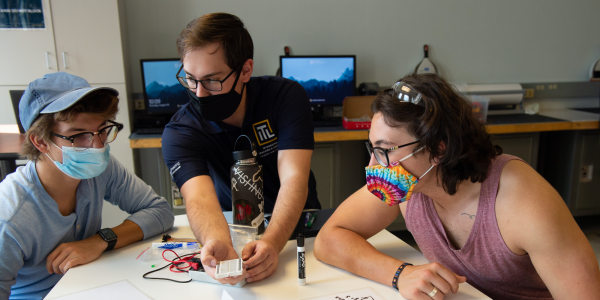 Josh Miller, a mechanical engineering student, is the first to enroll in the ITLP Arduino micro-credential - a programs that aims to serve students looking to improve their proficiency with Arduino microcontrollers. END_OF_DOCUMENT_TOKEN_TO_BE_REPLACED
Categories:
Tags: