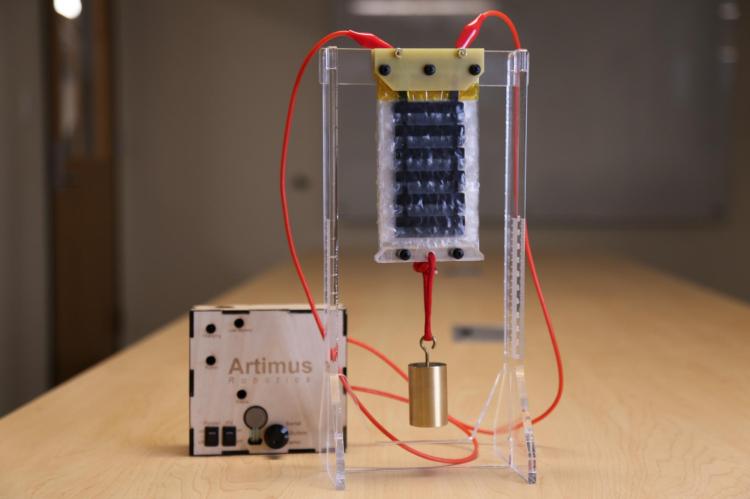 Artimus Robotics, a spinout company of CU Boulder’s Paul M. Rady Department of Mechanical Engineering, recently received $225,000 through the National Science Foundation’s Small Business Innovation Research (SBIR) Phase I program. This award will enable further research into the unique electromechanical failure mechanism in HASEL actuators, a new class of smart, soft, high-speed robotic hardware. In doing so, the reliability, robustness and efficiency of these actuators can be improved and more widely adopted across highly demanding applications, including industrial automation or underwater marine robotics.

Co-founder and CEO Tim Morrissey answered questions about the SBIR Phase I program, upcoming research and how Artimus Robotics contributes to scientific discovery into products with commercial and societal impact.

Question: What will this award enable?

Answer: This NSF SBIR Phase I Grant enables deep scientific research into the unique electromechanical failure mechanism observed in HASEL actuators. The customers of Artimus Robotics demand highly reliable and robust actuators which can only be achieved by fully and deeply understanding how the HASEL actuators fail. A team of high caliber researchers will commit significant efforts over the next year to perform this deep research and further de-risk the adoption of HASEL actuation technology.

Question: How will Artimus Robotics go about increasing the reliability and robustness?

Question: How does Artimus Robotics transform scientific discovery into products with commercial and societal impact?

Answer: One of the founding principles of Artimus Robotics is to make a positive impact on the world around us. We believe this goal is best accomplished by transitioning scientific breakthroughs into real-world applications. At Artimus, we are truly built on this belief. As a group of academic engineers that had seen success in academia, we knew in order to truly realize the value of our research, we had to commercialize. We strive every day to balance scientific and engineering discovery with real-world societal needs.

America’s Seed Fund, supported by the National Science Foundation awards $200 million annually to startups and small businesses, transforming scientific discovery into products and services with commercial and societal impact. Startups working across almost all areas of science and technology can receive up to $1.75 million in non-dilutive funds to support research and development, helping de-risk technology for commercial success. America’s Seed Fund is congressionally mandated through the Small Business Innovation Research (SBIR) program. The NSF is an independent federal agency with a budget of about $8.1 billion that supports fundamental research and education across all fields of science and engineering.

Artimus Robotics is robotic hardware changing the way the world moves. Providing breakthrough HASEL actuation technology, Artimus Robotics actuation solutions offer increased functionality including smart, soft and versatile actuation systems to solve our customers' motion challenges. With applications ranging from consumer robotics to defense, Artimus has realized early customer traction in markets such as industrial automation, underwater marine vehicles and human-machine interfaces. To learn more about Artimus Robotics or how you can try HASEL technology in your application, please visit their website and follow them on Twitter.