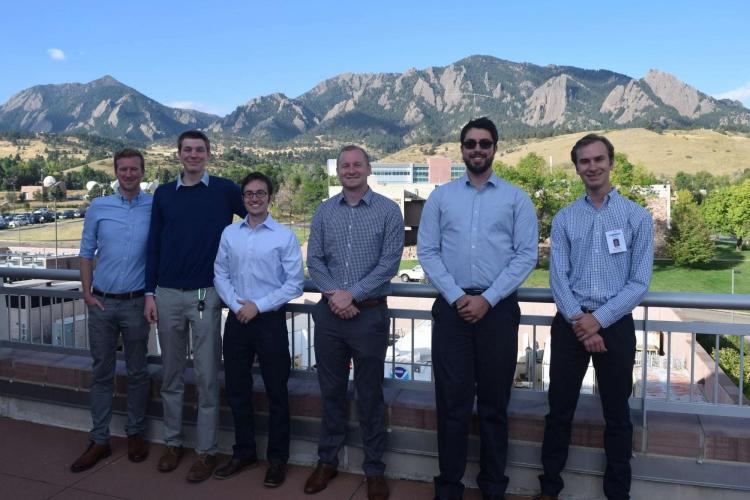 A capstone design project completed last year has spent nearly two months in operation aboard National Oceanic and Atmospheric Administration (NOAA) ship Ronald Brown. Over the course of the 2018-19 academic year, mechanical engineering students developed a motion stabilization system. Their design was built to keep a LIDAR sensor pointing vertically on a large ship or pickup truck where the vehicle is not stable to enable better measurements. Recent tests of the device reveal successful results visible in the video below in the way the system keeps the horizon stable despite the rolling motion of the ship. Students on the team include Max Armstrong, Matt Lein, Carson Murray, Rob Rosenthal and Paul Salame.

A Project Summary from the Team

For our senior capstone project we worked with NOAA to design a motion compensation platform that was capable of stabilizing a Doppler Lidar system within 0.2 degrees. The system needed to fit in the bed of a pickup truck and survive months out at sea on the deck of a research vessel. To account for this, the platform was built out of aluminum and powder-coated steel components to minimize corrosion during time out at sea. To protect the electrical components from the elements we designed a self-contained industrial panel, and anything that was outside the panel was ruggedized. The control system was designed in Labview using a PID controller and inertial measurement units to track pitch, roll and accelerations for feedback. The system was also designed to accommodate future Lidar units. To do this, the height of the cradle that holds the lidar unit is adjustable. For safety, the system had mechanical and software limitations on the maximum allowable pitch and roll while compensating and an E-stop pendant as a failsafe.

After the project was turned over to NOAA, one of our team members, Max Armstrong, continued to work on it as an intern where he finished preparing it for its maiden voyage. The platform spent nearly two months in operation aboard the NOAA ship Ronald Brown starting in early January 2020. The platform performed well beyond specifications even in heavy weather. It will likely be used for future truck-based research campaigns at NOAA.

The System in Action